The other French châteaux: Visit the Five Sons of Carcassonne 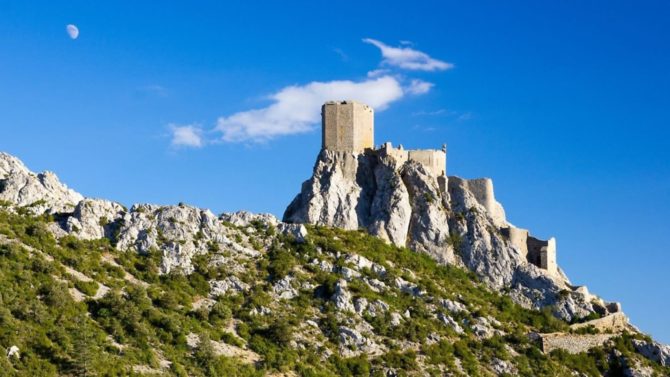 Standing guard over so-called Cathar Country, these royal citadels in south-west France are the rugged older siblings of the fairytale châteaux of the Loire

France’s Pays Cathare stretches across the Massif de Corbières in the Aude department of south-west France. Here, the Gnostic Christian movement of Catharism was at its peak in the 12-14th centuries, until a crusade by the Catholic Church instigated by Pope Innocent III. The area is home to 22 fantastic destinations including castles and abbeys that are must-visits for history buffs.

In the 13th century, the King of France took five castles in the area as frontier fortresses to protect France against the nearby Roussillon, then part of the Kingdom of Aragon. Today these majestic structures welcome hundreds of thousands of tourists to revisit the medieval era in the most atmospheric of settings.

A ten-minute drive from the attractive town of Tuchan past plenty of vines takes you to the ruins of the Château d’Aguilar. From the car park it’s a short climb to the top, where the reward is panoramic views towards Pyrénées-Orientales. The castle, which was abandoned in 1659, boasts a 12th-century inner keep surrounded by a 13th-century pentagonal fortification.

This château, at a lofty 800m above sea level, takes its name from the Occitan phrase Pèirapertusa, meaning ‘pierced rock’. As the biggest of the Five Sons, it’s also known as the Carcassonne Céleste (Celestial). It hosts various events including a medieval festival (4-5 August 2021) in a suitably atmospheric setting.

Once owned by Saint-Michel de Cuxa Abbey in Prades, this castle perched on Mont Ardu is France’s southernmost fortress. It has gorgeous views over the surrounding fir forests, but to get there you’ll need your hiking boots to navigate the climb. One of its towers is named the White Lady tower, after Blanche de Bourbon, the granddaughter of Philip IV. According to local legend, it is she who is responsible for the mists that shroud the castle in cloud.

Part of the honey-hued village of Cucugnan, this château is regarded as one of the best preserved of the Cathar fortresses. It was restored from 1998-2002 and is now well equipped to welcome visitors to explore its haunting ruins.

Château de Termes Surrounded on three sides by ravines above the village of Termes, this castle was in fact almost demolished in the 17th century. Today it’s a great day out, running regular tours (in non-Covid times) and offering a handy guidebook to inform your visit.

14 fairytale châteaux to visit in France

The reality of owning a French château