Explore the grands boulevards of Paris 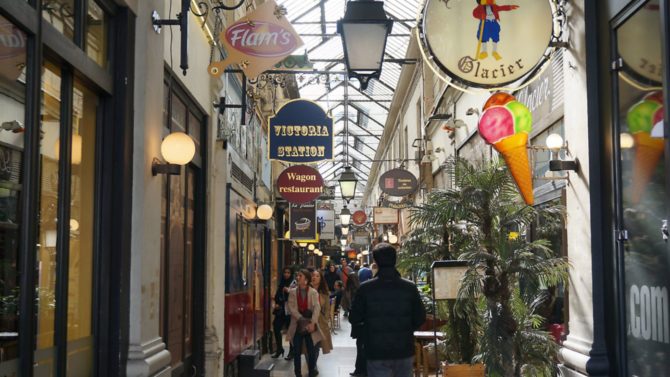 This is an extract from Paris 201: Uncommon Places in the City of Light by Jerry Marterer

Just opposite the Grands Boulevards métro station along the boulevard Montmartre is the Musée Grévin, a wax museum built in 1882. Every Parisian was sure to visit as a child. It’s an eclectic mix of history, nostalgia, and kitsch: Robespierre, Marat in his bathtub, Elton John, Mother Theresa, and Michael Jackson. Everyone should go at least once, but that is not why we came to this metro stop.

To the left of the façade of the Musée Grévin is the entrance to the passage Jouffroy, an 1847 version of a shopping mall. At the time, Paris was not yet pedestrian friendly with horse-drawn transportation, muddy streets, and a lot of unheated buildings. The first passages appeared in the late 1700s. There are still over a dozen remaining in Paris, and this neighbourhood has some of the most quaint and lively ones. Jouffroy was the first heated passage, and today is populated by family owned specialty shops for expensive toys and games, gourmet candy, posters, and art books. It even has its own hotel, the Chopin.

Across the boulevard Montmartre is the Passage des Panoramas, built in 1800 with a similar glass roof and mosaic floor. It was the first passage to have gas lights. It is the narrowest and most original of the passages. Restaurants spill out into the passage, interspersed with dealers of stamps and vintage autographs. This is a prime neighbourhood to explore these relics of another age since back through the passage Jouffroy and across the street is the passage Verdeau. Antique and art galleries, framing shops, and cafes are the norm here. The passages are relatively unknown to tourists and with the Musée Grévin, they make up our favourite rainy day option when we have visitors, although we also stop here for lunch when we attend auctions at Drouot.

One of the city’s most venerable dining spots, the Bouillon Chartier, is a few blocks away on the rue du Faubourg-Montmartre. It opened as a “bouillon” serving soup to hungry workers two centuries ago. A monument to Parisian life, it is cavernous, crowded, noisy, and inexpensive, with simple old style cooking. Brusque waiters will write your order on the paper table covering. The waiters are charged for what they bring from the kitchen and settle up at the end of their shifts, providing the incentive for them to collect from the customers they serve. There are cabinets of small drawers throughout the place. These were for daily regulars to store their napkins which were washed once a week, a practice that was outlawed years ago as unsanitary, but the drawers remain in many old time restaurants.

Retired American CEO Jerry Marterer and his wife Suzanne bought an apartment in a neighbourhood near the Eiffel Tower more than a decade ago. Now, he shares his knowledge of Paris in this compact, glossy guide, which offers insights into attractions off the tourist track. The author goes on a whistle-stop tour, using the neat idea of following one métro line (No.8) and one bus route (No. 69) to show the points of interest en route. Sections follow on wining and dining (with handy advice on etiquette), Impressionist art, unfamiliar museums and the ‘villages’ beyond the old city walls that retain their own character. The final chapter, giving the author’s favourite dining places in each of the 20 arrondissements, uncovers some mouth-watering gems that will lift any vacation in Paris. For more information and to get a copy visit paris201.com

Previous Article The different tax regimes available to businesses in France
Next Article A French icon: the beret