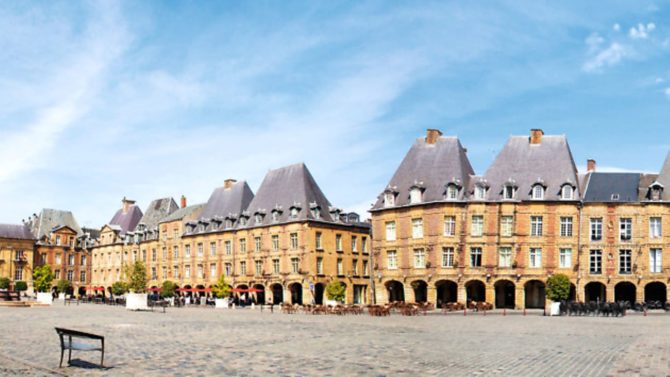 Capital of the Ardennes department in northern France, Charleville-Mézières is famous for its international puppet festival and has plenty to offer those in search of a cultural break in France, plus it is easy to reach via Eurotunnel Le Shuttle

Straddling the River Meuse in north-eastern France, Charleville-Mézières is a charming mixture of baroque architecture and fascinating museums, with plenty to charm the most discerning visitor. The town was the birthplace of 19th-century poet Arthur Rimbaud and is best known today for hosting the International Puppetry Festival, which has earned it the title of ‘World Capital of Puppetry Arts’.

The biennial festival provides great entertainment for families as 250 troupes of puppeteers from around the world – glove, string and shadow – put on shows in theatres and on the streets. The next festival isn’t until September 2017, but in the meantime you can discover more about the town’s puppetry links at the Institut International de la Marionnette. On the facade of the historic building stands a clock containing a giant automaton. Every day from 10am to 9pm, ‘The Great Puppeteer’ introduces 12 episodes from a medieval Ardennes legend called the Four Sons of Aymon.

The town’s centrepiece is Place Ducale, which covers an area of 10,000 square metres and mirrors the style of Place des Vosges in Paris. The squares were built just a year apart, in 1606 and 1607 respectively, by two brothers, Clément and Louis Métezeau. Enjoy a coffee at a café terrace and marvel at the architectural symmetry created by rows of baroque buildings topped with blue-tinged slate roofs. Continue your walking tour just a few streets away, past the Basilique Notre-Dame-d’Espérance, the town hall and the many elegant bourgeois homes.

Anyone interested in French literature will find a lot to enjoy at the Musée Arthur Rimbaud, which honours the town’s most famous literary son, who was born in 1854. The museum, housed in a converted mill, has just reopened after a two-year renovation and exhibits letters, memorabilia from the poet’s travels through Africa and an extensive collection of his works.

Just down the road you’ll gain further insights into Rimbaud’s life and work at the Maison des Ailleurs. This museum is housed in an apartment where the poet’s family once lived and the rooms have remained untouched since the late 19th century. They are now the setting for slideshows and interactive visits, with images of Charleville at the time of Rimbaud’s birth and fragments of his most famous poems projected on to the walls.

No visit to the town would be complete without a stop at the Musée de l’Ardenne, which opened on 20 October 1994, the 140th anniversary of Rimbaud’s birth. Here, in a building whose architecture spans four centuries, you’ll get a deeper understanding of the area through its archaeology, history and art.

For more information on what to visit and details of hotels and restaurants, see www.charleville-tourisme.comEurotunnel Le Shuttle is the quickest way to the continent by car. Book early and get the best fares to explore Charleville-Mézières. Visit www.eurotunnel.com or call 0870 850 8133 to book your crossing.

Previous Article My Dream Home: interview with an agent in the Alps
Next Article Introducing NOVASOL holiday homes