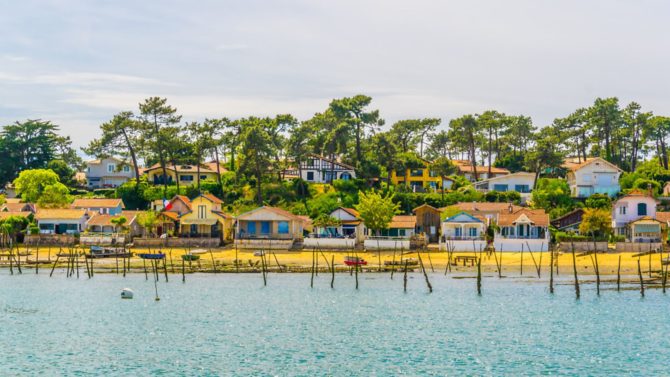 With its bountiful surf and seafood, not to mention Europe’s highest sand dune, the Bassin d’Arcachon on France’s south-west coast provides the perfect escape

It’s dark when our plane touches down in Bordeaux, so it’s hard to judge the weather. Yet as we walk from the terminal to our hire car, I can’t help but note a mildness in the air. At home, crisp days have given way to cool nights and although we have come with coats in tow, I feel hopeful that we may not need them here.

The Gironde department is known for its temperate Oceanic climate, which provides the ideal conditions for the region’s renowned terroir. But we aren’t here to tour Bordeaux or its vineyards. Instead we pile the kids into the car and head 30 miles to the west to the Bassin d’Arcachon, or Arcachon Bay, on France’s Côte d’Argent, halfway between Biarritz and La Rochelle.

Stretching from the Cap Ferret headland in the north to the Dune du Pilat in the south, this inland sea boasts some of the region’s most beautiful beaches. And although there’s a part of me that wishes we were visiting in the middle of summer, local friends assure me that hors-saison is the best time to truly appreciate the natural wonders of the bay.

At the height of the tourist season, this route linking Bordeaux to the coast sees a steady stream of day-trippers from the city and holidaymakers from further afield. But as my husband steers the car through sleepy villages and down empty roads, I feel pleased that we may have the place to ourselves.

The next morning, we wake to the welcome site of golden sunshine. Our first stop is Andernos-les-Bains, a popular resort town and oyster fishing port located near the centre of the bay. It’s market day and we stroll through the town’s bustling centre before heading to the quiet harbour where we wander through brightly painted oyster cottages that are ubiquitous along the bay.

Every December, the town hosts a celebration of local industry with the Cabanes en Fête, a colourful festival with music, oyster and wine tastings.

We decide to stop for lunch and there’s no shortage of options. Some restaurants are even clad in oyster shells in case you’ve forgotten where you are. We settle for one with a large terrasse and views. The oysters are so fresh, they’re often served within hours of being plucked from their beds. They come a dozen different ways, but there are also other seafood options and combined platters for those who can’t decide. We ask for a crisp white wine and our waiter suggests a bottle of Entre-Deux-Mers, the aptly named Bordeaux.

It’s a perfect lunch and we are delighted to be sitting outside in T-shirts. After basking for a while in the sunshine and the afterglow of a good meal, we head out for a walk along the beach. It leads us to Saint-Brice-Les-Quinconces-Le-Coulin, a nature reserve spanning from Andernos to Arès in a greenbelt of maritime pine.

It’s low tide and birds dip in and out of the shallow pools in the sand. The bay’s sheltered waters serve as important wintering ground for migratory birds and the nearby Réserve Ornithologique du Teich is a birder’s paradise. This ornithological reserve sits at the mouth of the River Eyre and covers an expanse of delta marshland that hosts a variety of species, including herons, storks, oystercatchers and kingfishers. The period from October to March is known as overwintering season when the birds only make short journeys to find food and the reserve sees the highest concentration of species.

Towards the middle of the bay, the Île aux Oiseaux, or Bird Island, provides another sanctuary for birds. The island is home to more than 50 rustic cabins that are used for leisure activities. The most famous are the Cabanes Tchanquées, named for an old Gascon word chancas, which means stilts. These towering icons of the bay were originally built for guards protecting the island’s oyster beds from poachers.

It’s warm enough for the boys to take their shoes off and dig in the sand. So we settle down on a nearby log to watch them play and I can’t help but notice there is something different about the quality of light. Even as the sun begins to sink towards the sea, there’s a hazy warmth to the sky that reflects off the water and reminds me of a summer’s evening.

It’s getting late, so we work our way back to the car and follow the coast around to the Cap Ferret peninsula, the narrow strip of land separating the lapping waters of the bay from the rolling waves of the Atlantic. While it’s not to be confused with the glitzy (often overly touristy) Cap Ferrat on the French Riviera, Cap Ferret still hosts its share of well-heeled visitors. But even though it has become increasingly popular in recent years, it still maintains a rustic, laid-back vibe.

It’s easy to see why it’s so popular. This relatively small peninsula offers nearly everything you could hope for in a holiday, from wide sandy beaches and surfing spots like Plage de l’Horizon to the charming oyster villages of L’Herbe and Le Canon – all linked by miles of safe, forest-lined cycle paths. Cycling is a popular pastime throughout the area. It’s possible to cover the length of the bay en vélo and you’ll find bike hire companies in all the larger towns. In peak season, when the roads around the bay can be busy, the cycle routes offer stress-free travel.

Of course, no trip to Cap Ferret would be complete without a visit to the historic lighthouse. It’s 258 steps up to the top of the Phare du Cap Ferret, which offers sweeping views of the bay and open sea beyond. From here you can really appreciate the magnitude of the Dune du Pilat across the way. Another local must is Chez Hortense, a legendary restaurant renowned for its unrivalled moules-frites as well as its views. Some make the trip out to Cap Ferret just to dine here and it’s not uncommon for bateaux taxis to ferry people across from Arcachon for lunch.

The next day, we head to the south side of the bay to visit the historic town of Arcachon. Like most places here, Arcachon was once a quiet fishing port until the railway came to town in the mid-19th century. It’s divided into four distinctive quartiers named for the four seasons. The day is cloudy and noticeably cooler, so it seems fitting that we start our tour in a neighbourhood known as the Ville d’Hiver, or Winter Town. This part of town is known for its many ornate villas or Arcachonnaise, which were built for wealthy tourists in the 1860s.

Arcachon gained a reputation as a health resort in the early 19th century when upper class Bordelais suffering from Tuberculosis were sent here to convalesce. The area’s climate was thought to be therapeutic and sea bathing was offered as a cure. The discovery of a natural spring, La source Sainte Anne des Abatilles, in 1923, further cemented Arcachon’s image as a wellness spot. Today you can find L’Eau des Abatilles in supermarkets and you can still visit the source to ‘take the waters’. As we make our way towards the seafront, we stop off at the beautiful Parc Mauresque to check out the famous belvedere at the Observatoire Sainte-Cécile. Standing 25 metres high, the steel tower offers great views of the town and given its resemblance to another famous French tower, I’m not surprised to learn that a young Gustave Eiffel collaborated on its design.

The main seafront is situated in the Ville d’Été, or Summer Town. Even in the off-season, this is the liveliest part of town and home to the most popular bars and restaurants. At the forefront sits the impressive Château Deganne, a Neo-Renaissance mansion that houses the town’s casino.

Although wandering along the upscale seafront and past elegant villas offers a glimpse of Arcachon’s bourgeois past, we are keen to get back to more natural wonders. And I’m told there’s no better way to get up close and personal with nature than the awe-inspiring Grand Dune du Pilat.

Situated at the southernmost tip of the bay in La Teste-de-Buch, this impressive natural dune measures just over 100 metres high and 2.7 kilometres long and is understandably the area’s biggest tourist attraction. From Easter through October, there’s a staircase to the top, but we’ve missed it so have no choice but to clamber up as best we can. As we reach the desert-like summit, the sun breaks through the clouds and it’s suddenly very warm. We sit down for a rest on the sand and take in the spectacular views one last time. I concede that my friends were right about visiting off-season – we’ve thoroughly enjoyed the peace and quiet. But I also know I’d come back anytime.

By plane: Fly from Gatwick to Bordeaux with easyJet or British Airways.

By ferry: Brittany Ferries operate two crossings a week from Portsmouth to Bilbao – a 3.5-hour drive from Arcachon.

The towns of the bay are linked by cycle paths, so it’s easy to get around by bike. Sea taxis will also take you to most points of interest across the Bay.

An elegant hotel with lovely, spacious rooms and beautiful views of the Arcachon Bay. Rooms from €110.

Legendary restaurant renowned for its unrivalled moules-frites as well as its views.

Explore along a 6km-long circular path with 20 roofed viewing points where you are most likely to see birds. Dogs are not allowed.

Beaches in France rated among the finest in Europe

Dive into a wellbeing escape on the Atlantic coast in France

Previous Article How to furnish your French home on a budget
Next Article Brittany bargains: find your dream house in France for less than €150,000