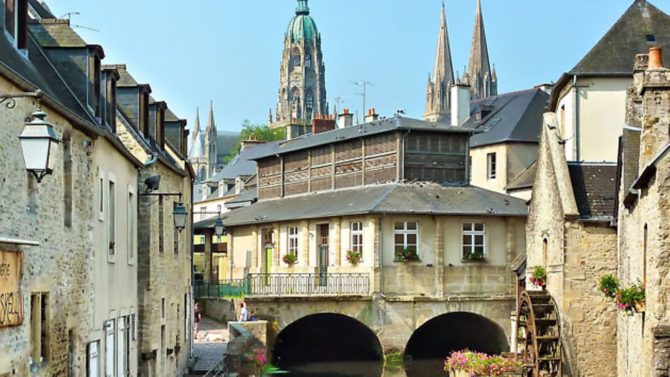 On the 950th anniversary of the Battle of Hastings, explore Normandy and discover the history of William the Conqueror and how he became King of England

Who was William the Conqueror?

William became Duke of Normandy at the age of 8 when his father died but he was challenged by the Norman barons because of his age and his illegitimacy. In 1047 he won a battle at Val-ès-Dunes and asserted his power. The duchy of Normandy grew in power until in 1066 William defeated King Harold of England at the Battle of Hastings and was crowned King of England.

The Battle of Hastings

Following the death of Edward the Confessor, king of England, Harold Godwinson was made the next king, however he faced challenges from Harold of Norway and William, Duke of Normandy. William claimed Edward had appointed him his successor and Harold swore loyalty to him. William gathered a force of 15,000 men and landed in Sussex to challenge Harold. A battle took place at Hastings on 14 October 1066 and Harold’s forces, weakened by their recent victory over Norway, were defeated and Harold was killed. William was crowned king of England on 25 December 1066.

The fact that we know so much about the Battle of Hastings is mainly thanks to the Bayeux Tapestry. This 70-metre-long embroidered work of art has been on display in the Musée de la Tapisserie de Bayeux in the town of Bayeux in Normandy since 1983. Follow the audio-guide along the full length of the tapestry, in a darkened, temperature-controlled room, and learn more about the Battle of Hastings. Ten of the tapestry’s 58 scenes, all told through intricate stitching in eight colours of wool, are dedicated to the Battle of Hastings and the scene at which most visitors pause longest is the most iconic: where one of the archers hits Harold in the eye. Admission from €9 for an adult to see the tapestry.

Special events for the 950th anniversary of Battle of Hastings: In the Musée de la Tapisserie de Bayeux you can discover the early life of William the Conqueror in an exhibition of the comic strip William by Borch and Miniac. Runs until the end of 2016.

The other jewel in Bayeux’s crown is the Gothic Notre-Dame Cathedral, where the tapestry hung in the nave on feast days. The imposing copper-clad tower and double spires are visible from miles around, while the crypt dates from the 9th century and has 15th-century paintings on the columns and pillars.

Special events for the 950th anniversary of Battle of Hastings: From October till December the cathedral vaults come alive three evenings a week with a projection of the Bayeux Tapestry on 2 giant screens in the nave. You can learn about the history of the building and the story of William the Conqueror.

William was born in Falaise in 1028, the illegitimate child of Robert, Duke of Normandy and a woman from the town, Herleva.The castle overlooks the town from a high rocky crag and was the seat of the Dukes of Normandy. You can now discover the castle and the tale of William the Conqueror with a 3D exhibition. Admission from €8 for an adult.

The Château de Caen was built by William the Conqueror in around 1060 and it is one of Europe’s largest fortified enclosures covering a total surface area of 5.5 hectares. He needed a second capital to counterbalance Rouen and to affirm his power in the west of Normandy. He built the fortress on a rocky spur overlooking the Orne valley from where he could monitor all who passed through the area. Visitors can now walk around the ramparts and visit the Église Saint-Georges as well as the Musée de Normandie and the Musée des Beaux Arts which are both housed within the château grounds.

William married his cousin Matilda of Flanders in the 1050s against the wishes of Pope Leo IX. It is believed that William and his love Matilda eventually gained papal recognition of their marriage after building these two magnificent abbeys in Caen – the Abbaye au Hommes and the Abbaye aux Dames. They housed Benedictine monks and nuns and are magnificent examples of Norman Romansque style. Matilda died in 1083 and was buried in the Église de la Trinité at the Abbaye aux Dames while William, who died in 1087, was buried in the church of Saint-Etienne at the Abbaye aux Hommes. In 1944 the Abbaye aux Hommes provided refuge to the citizens of Caen during the bombings and in 1965 it became the city hall.

Special events for the 950th anniversary of Battle of Hastings: On 13 December there is a night-time tour of part of the Abbaye aux Hommes where you can learn more about its founder William the Conqueror.