Why Annecy in France is well worth a visit 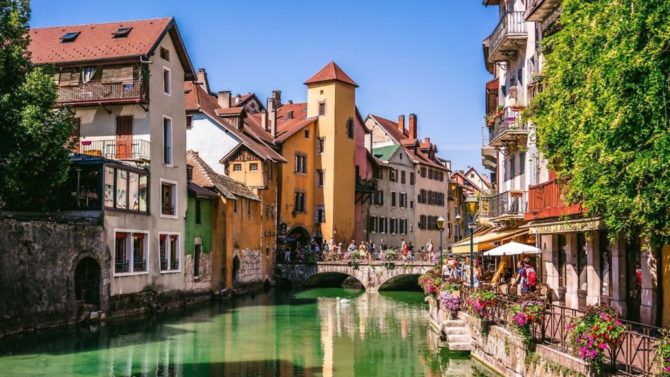 The early summer sunshine was exquisitely warm on my back as I leaned on the cool stone bridge of Pont de la Halle.

Beneath my feet flowed the River Thiou, framed by clusters of vividly coloured, fragrant blooms, tumbling towards its waters. My gaze was focused on the delightful Savoyard jewel of Annecy. At first glance, this capital of Haute-Savoie certainly does not disappoint. It truly is an ancient town, its name deriving from the Roman Villa Aniciaca.

Nestling at an altitude of 447 metres in the French Alps, it sits proudly on the northern tip of Lake Annecy, 35km south of Geneva. A famous former resident was the 18th-century writer and philosopher, Jean-Jacques Rousseau, born in nearby Geneva.

Sauntering along the Quai Perrière, home to plentiful restaurants, I succumb to temptation and slip easily into the welcome shade of the next lively spot I encounter. Following a recommendation from a friendly waiter, I enjoyed an excellent local white wine, Chignin-Bergeron, cru of the Vin de Savoie appellation. I opt for tartiflette, a simple dish of potatoes, onions, grilled bacon cubes and Reblochon – a delicious complement to my wine.

With little persuasion, I round off my lunch with Gâteau de Savoie, which even has its own legend, I am told. It was invented in 1358 at Chambéry, when Charles IV of Luxembourg visited the Count of Savoy, Amadeus VI. To win over his sovereign, Amadeus asked his chef to prepare a cake as light as a feather. I can testify that the result is a truly wonderful fat-free dessert.

The vista beyond Pont de la Halle reveals the glorious expanse of Lake Annecy, behind which the verdant mountains of the French Alps rise majestically. At 14.6km long, the lake’s blue-green water is a truly breathtaking sight. The second largest natural lake in France, it is also known as Europe’s purest.

It is often said that the lake can only be fully appreciated when you venture on to its waters. Deciding to follow this sage advice, I reluctantly take my leave of the charming quayside restaurant and make my way to the sleek, red and white cruise boat sitting at the edge of the lake.

On board the spacious vessel, it is then possible to marvel at the wonder of the lake from an entirely different perspective. The Old Town of Annecy grows smaller and smaller as you disappear into the vast expanse of water. It even boasts its own beaches, which entice you to bathe in velvety waters. For anyone so inclined, small motorboats are for hire, to transport you to this tranquil haven.

Once back on dry land, meandering along the quayside, I approach Pont Perrière. This ancient stone bridge offers a centre stage view of the quirky Palais de l’Île, which resembles a stone boat anchored in the river. This unique fortified house was built in 1132, as the home of the Lord of Annecy. Later a courthouse and prison, it now contains a museum of local history.

Climbing slowly up to the Château d’Annecy, I imagine its original glory as the former residence of the Counts of Geneva and the Dukes of Genevois-Nemours in the 13th and 14th centuries. It towers over the picturesque Vieille Ville, which has preserved its arcaded houses with their multicoloured facades.

The River Thiou, one of the shortest in France, at only 3.5km, flows down from the great lake and on through the town, wending its way past half-timbered houses and ancient churches. An abundance of tiny bridges, arching over narrow canals, decorate the scene, although the Old Town is also crossed by the larger Canal du Vassé.

Gradually descending to the Quai de l’Île, I saunter across Pont Morens, the oldest stone bridge in the town, framed by two staircase towers. The first stone bridge to be erected over the River Thiou, it was originally covered by houses. Wandering through the enchanting Old Town, its quaint cobbled streets beckon me to explore still further. I discover the gothic Cathédrale Saint-Pierre d’Annecy, standing in a small cobbled square. It was erected at the beginning of the 16th century, as a chapel for a Franciscan priory. The reward for climbing to the top of the bell tower is an unparalleled view of the town and its lake.

All along the narrow streets, locally hand-crafted gifts sit proudly in the tiny shopfronts, while a vast array of unusual wares is displayed at the quaint market. I mingle and chat with the friendly locals, sipping a welcome coffee, as my senses take in the veritable explosion of colour and sound which surrounds me. I am reliably informed that the tradition of a market in Annecy dates back as far as the Middle Ages.

My final foray is Glacier Perrière, the town’s most celebrated establishment. With the impossible choice of 70 delectable flavours of ice cream vying for my attention, I ultimately decided on noix de coco. I linger on the nearby cobbled bridge of Pont Perrière and savour this creamy concoction. Annecy is most deservedly called the Venice of the Alps. Once seen, it is truly difficult to forget.

Friendly hotel situated a few steps from the Old Town and close to the lake. Doubles from €81.

This Alpine-style canalside restaurant serves traditional cuisine made from local produce. A warm welcome and delicious fare is assured.

For three days, stunning masked and costumed figures, from all over Europe, parade and pose in the streets of the Old Town and beside the lake.

Born out of the great ‘Venetian style’ party given in 1860, in honour of the arrival of Napoleon III, this event has evolved into the biggest fireworks show in Europe. In the magical setting of the lakeside, your senses will be aroused by the fireworks in rhythm with the music, lights and special effects.

From Paris (Gare de Lyon) take the TGV direct to Annecy. Geneva International Airport is 50km from Annecy, and then take link by train or coach.

What are the rules for travelling to France after Brexit?

Previous Article My Frugal France: Caring for our adopted animals
Next Article A delicious guide to French biscuits