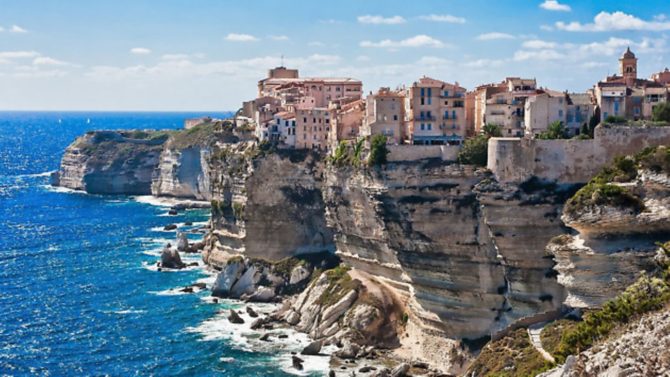 An insider’s guide to the French island of Corsica, including the main attractions to visit on holiday, the best towns and villages to live in, the major festivals and events, and buying property in Corsica

Situated south-east of France’s Mediterranean coast and the region of Provence-Alpes-Côte d’Azur, and north of the Italian island of Sardinia, Corsica is a popular destination for holidaymakers and an expensive and sought-after place to buy property in France. Known in French as the Ile de Beauté, Corsica has astounding geographical diversity, made up of dramatic mountain peaks and deliciously fragrant scrubland (the maquis), dense forests, precariously perched hilltop villages and glittering turquoise bays fringed with white sand beaches and glamorous resorts.

Although Corsica has officially been part of France for more than 200 years, it feels distinctly different from the mainland with unique cuisine, culture and traditions and its own rich history. As well as French, Corsican language is taught in schools and spoken by many residents. Corsica enjoys a Mediterranean climate, with hot summers and mild winters.

Most of Corsica’s major towns are situated on the coast and include Ajaccio (its capital), Bastia, Calvi, Bonifacio and Porto-Vecchio. The latter in particular attracts wealthy holidaymakers with yachts. Corsica is perhaps best known for its beaches but it also offers fabulous food, wine, art and music and you can even ski from December to April at four small resorts, making the island a year-round destination.

The island of Corsica is divided into two departments: Haute-Corse and Corse-du-Sud.

Haute-Corse is the northern half of the island and encompasses Calvi and the Balagne region (nicknamed the ‘Garden of Corsica’), the Desert des Agriates, the mountain town of Corte, the Cap Corse peninsula and the industrial port and departmental capital, Bastia.

Corse-du-Sud is the southern half of the island and encompasses glamorous Porto-Vecchio, medieval Sartène and Corsica’s oldest town of Bonifacio. Ajaccio, on the west coast, is both the departmental capital and the capital of Corsica.

Places to visit in Corsica

The most visited areas of Corsica are without doubt its coastal towns. Calvi, in the north-west, was a busy port in the Roman era and remains a popular and beautiful example of architectural heritage. There are colourful houses, sophisticated harbourside cafés, a pine-fringed crescent of sand and cobbled streets climbing up to a Genoese citadel, from where the view of the bay is breathtaking. From here it’s a short drive (or coastal train ride) east to smaller and quieter L’Ile-Rousse, whose name – meaning ‘The Red Island’ – is taken from the ochre rocks of its islets. Its covered marketplace huddled beneath the plane trees feels decidedly French and is a great place to buy local produce.

The high-rise blocks of business hub Bastia, on Corsica’s north-east coast, are softened by a picturesque port and old town, worth exploring for its elegant architecture and excellent restaurants. Head to Corsica’s south-eastern coast, and the resort of Porto-Vecchio, if you want glitz and glamour. Dubbed the Corsican St-Tropez, it attracts wealthy yacht-owners and offers numerous fashionable bars and boutiques. Bonifacio, 30km further south on Corsica’s southernmost tip, is the island’s oldest town and has a distinctly Italianate feel, perched dramatically atop creamy white cliffs. The town is also well placed for exploring the Iles Lavezzi.

But it’s not all about the main resorts in Corsica; the island is also home to 10 Plus Beaux Villages. Some of the loveliest are situated in the north: timeless Sant’Antonino with its far-reaching views; Pigna, home to artisans and musicians; and trendy St-Florent, which is reached via a scenic drive through the Desert des Agriates, a 5,000-hectare area of protected scrubland. Also well worth a visit in Corsica are the Scandola nature reserve, a UNESCO World Heritage Site reached by boat from Calvi, and the Cap Corse or “finger” of Corsica, jutting out into the ocean in the north.

Things to do in Corsica

Due to its geographical diversity, Corsica caters for a wide range of activities whether you like to be active or prefer a more sedate pace. The island’s mountains provide fantastic opportunities for hiking, canyoning and off-road 4×4 tours, all of which make the most of the beautiful natural environment. You can also ski in Corsica at four small resorts, whose slopes reach an altitude of 1,870m. Those who love sea and sand are spoilt for choice in Corsica with almost 200 beaches, widely considered some of the most beautiful in France. The island has a mixture of white sand beaches and pebbly coves, some of which are only accessible by boat. Beaches are clean and the swimming excellent.

Corsica’s cuisine is often described as a blend of French and Italian, but with its own unique flavours and ingredients. Fresh fish and seafood are abundant but traditionally Corsicans are meat-eaters, so expect to see wild boar, lamb and veal on menus everywhere. Much of the mountain cooking is based around the locally produced dairy products, and the most traditional Corsican desserts are milk- or egg-based. Corsica also produces several very good wines and liqueurs, little known outside the island; visit a vineyard for a dégustation. As in mainland France, food and drink is taken very seriously in Corsica and standards in restaurants are generally high.

Age-old arts and crafts abound in Corsica – in particular knife-making, jewellery-making and pottery – and you can watch artisans at work in villages such as Pigna as well as in the larger towns. Corsica has a unique musical tradition of polyphonic choral singing, the rebirth of which was linked to the rise of Corsican nationalism in the 1970s, and concerts are widely given. Corsica also has its own thriving cosmetics industry produced from the island’s native plants. One of the best-loved ingredients is immortelle, growing wild in the maquis and said to have potent anti-ageing properties, and products can be bought in boutiques across the island.

There is a lively calendar of events in Corsica, from the Rallye du Pays Ajaccien in January (a car rally from Casone to Ajaccio) to Calvi’s two summer music festivals, interspersed with smaller celebrations of almost every local product from the fig and chestnut to honey, olive oil and charcuterie.

Contrary to some belief, buying property in Corsica is not prohibited if you are non-resident; although local politicians voted to impose a ban due to increasing numbers of residents being priced out of the market, it has never become law.

Unsurprisingly, Corsica’s most expensive areas for property are in or near the coastal resorts, with the glamorous southern resorts of Porto-Vecchio and Bonifacio commanding the highest prices. Less expensive property can be found inland.

Property styles in Corsica vary. There are rustic stone houses in inland villages, often requiring renovation, and tall, imposing townhouses with shutters and balconies in the major towns. Modern, luxurious villas and apartments can be found on the coast. Villas often come with a private garden and pool, while apartments often benefit from shared leisure facilities.

Previous Article What effect could a Brexit have on British expats in France?
Next Article Win! A copy of the novel Fatal Pursuit