Apple of my eye: Cider and cycling in peaceful Brittany 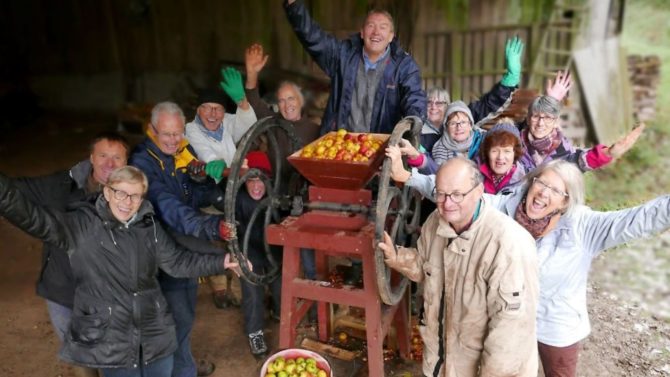 Cider and cycling prove the perfect combination for a Brittany break

A chum of mine, René, is a Breton nut. Not the shelled kind, but the sort who is passionate about all things to do with his native region. The language (very much alive and still spoken and taught), the music, dance, costumes, food, and, of course, drink.

Last year’s passion was to make cider, and not being a man to do anything the easy way, he wanted to use an authentic crusher and press which he eventually tracked and renovated. Apples were gathered and processed, but somehow along the way things went ‘pips up’. The brew was okay, but all who tasted it agreed something wasn’t quite right: “a hint of hessian”, “too honeyed” and so on. So René reviewed his method, researched and delved into the chemistry involved (quite a lot, as it happens) and chain-ganged a bunch of friends into helping; me and my wife included.

“Bring your bikes when you come, we’ll be cycling along the Nantes-Brest canal” read the email. How did that work? He’d already said we’d be picking up most of the contents of an orchard. We’d never get that lot in our bike panniers. But the cycling was to be but a delightful diversion, with two trailers to tote the apples and bikes where required.

Introductions between us Brits and the other twelve Bretons were effected, bikes loaded up and we headed for central Brittany; first stop a farm in Landeleau to see how it was done.

Le producteur de cidre, Jacky Dorval, looked for all the world like a former drummer in a ‘60s heavy metal band and was most certainly unfamiliar with the hairdresser’s scissors. His orchards loomed away into the mist, odd apples still hanging as he told his story. He’d given up being a sports teacher thirty years ago to create his dream. His 4,000 trees, all of which he planted himself, now produce 70,000 litres a year. He took us through the process as René scrambled up to inspect vats of juice. That seemingly huge production is sold within thirty kilometres of the farm, pointing to the tiny local population’s dedication to drinking true cidre fermier. The sun had burned off the mist by now. It was time to do some cycling on part of the Nantes-Brest canal (which incidentally, doesn’t start in Nantes, nor end in Brest, but who’s checking?); much wider than our narrowboat-sized waterways in Britain, with large lakes linked, the autumn landscape was utterly stunning and cycling a perfect way to explore.

Shafts of sunlight pierced the trees. I saw a kingfisher, heron, and inexplicably, a hunting falcon, which flew across my path, leather jesses streaming behind.

The banks were lined with ancient beeches and oaks, but also, sweet chestnuts. Now Mrs Cranmer cannot pass by food for free. Our travels are always interspersed with frequent stops for whatever is ripe: blackberries, wild strawberries, mushrooms and sloes. One minute we were pedalling along, the next she’d vanished. “Puncture?” asked my friends. “Non. Châtaignes, je pense” I replied, turning to retrace the towpath. Sure enough, there she was, gathering huge, shining chestnuts. I joined in to help and eventually, the rest gathered, we tore ourselves away to catch the others up, stopping all the while as yet another tree came into sight. It became infectious as Brits and Bretons happily harvested side-by-side. That night, in our Gîte d’Étape in Laniscat, we roasted some on the woodburner. Try it yourself: cut a cross into the skin of each nut. Put in a roasting tin (or shovel, in our case!) and bake until the skins open and the insides are tender, about thirty minutes – yummy.

The next day we had a 9am start as we got back to the business in hand and some hard-ish labour. Via the internet, René had bought the contents of an orchard in Ploërdut. The branches were bare but the ground beneath was a luscious carpet of apples: gold, red, orange, and yellow. We set to filling sacks with handfuls of the ripe fruit. It was impossible not to taste the different varieties and we worked as a happy band, juice dribbling down chins, until twenty-two bulging bags were stashed in the trailer.

Now the really hard work began and I understood why René had roped in so many friends. We moved our operations to Moulin Neuf, the farm where he was born, where the washing, crushing and juicing would commence. We manoeuvred the heavy cast iron and wood machinery into the mouth of the barn, and set up the table where the apples would be pressure-washed to rid them of leaves, mud, and worms (a few of these would probably get into the mix but it’s all good protein). We gradually found a rhythm; beefier types heaving the fifty kilo sacks onto the washing table to cut them open and spill the fruit out.

This was wet work, the person with the hose wielding the power to spray either the apples or the workers or both. Quite a bit of fou rire – giggling – went on. After washing, the apples were rolled into green buckets and tipped into the hopper of the ancient crusher, operated by two heavy cast-iron wheels each side.

The crusher spat out pulped flesh which was then dumped into the press. Bucket after bucket went in until the multi-coloured mash reached the top. A complicated sequence of wood-blocks had to be jig-sawed into place to allow the pressing to begin. Imagine a massive hydraulic car-jack ratcheting away, operated by two people, squeezing the juice which poured out in a rich dark stream. This was the product! The literal fruit of our labours. Much merriment occurred, much tasting, much holding up to the light, until the apple juice was pronounced to be good. A bottle of Jacky Dorval’s cider was opened using a spanner, no corkscrew being available, and the assembled crew toasted René’s 2018 Cidre du Moulin Neuf. Of course, the juice we worked so hard to produce is just the start. Fermentation, checking and adjusting pHH levels, etc., and ultimately bottling. But that’s for René to figure out.

But he has promised to give us a bottle or two for our labour; it seems like a decent return for a weekend in Brittany with chums, chestnuts, cycling and cider.