Cannes Film Festival: Where to wine and dine like a celebrity 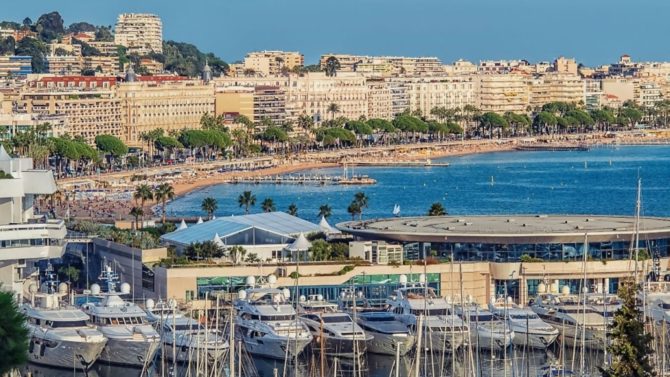 From secret beaches to celebrity boules or supping on cocktails, take a whirlwind tour of the places where the stars relax during Cannes Film Festival

Founded back in 1946, the Cannes Festival is France’s most prestigious film event. Past editions of this exclusive, invitation-only affair, which previews new films and documentaries from around the world, have been attended by movie stars ranging from Brigitte Bardot to Brad Pitt.

A popular venue for film producers to launch their new films, these days the festival, set on the famous Croisette sea front promenade in May – but taking place from 6-17 July this year – attracts global glitterati, who come as much for the after parties as the film premieres.

You might not be able to gatecrash one of those exclusive yacht parties, but if you know where to go there are still plenty of ways to see Cannes with the stars. Follow me on a whirlwind 24-hour tour of the A-list hot spots where celebrities, ranging from Tom Cruise to Juliette Binoche, love to chill during the world’s most famous film festival.

It’s just about impossible to get a room at the Hotel du Cap-Eden-Roc on the Cap d’Antibes during the globe’s most glittering film event: celebrities who’ve stayed here during the festival include Uma Thurman, Steven Spielberg and the entire gang from Ocean’s Thirteen. On a friend’s advice, however, I booked (way in advance) for a champagne brunch in the dining room of this legendary hotel which was the inspiration for the Hôtel Belles Rives in F. Scott Fitzgerald’s novel Tender is the Night. Sitting on the terrace of this elegant hotel admiring breathtaking views – while tucking into sushi and champagne, and watching a flock of starlets practising their red carpet moves – made a great start to my star-spotting holiday in Cannes.

After my champagne feast it was time to join celebrities – and their glamorously clad pets – as they jogged off those calories along La Croisette. Stumbling along this two-kilometre-long promenade fringed by some of the city’s most exclusive beaches, I heard plenty of champagne corks popping from the cabins of luxurious yachts lined up in the harbour.

Gasping for an aperitif after all that exercise, I popped back to my hotel to freshen up and then made a beeline for the Hôtel Barrière Le Majestic. During festival week this hip hotel’s private beach becomes an exclusive club where stars and their satellites love to strut their bikini-clad stuff.

If you’re keen to seek out a lesser-known spot where celebrities enjoy pre-prandial sipping you should zip up to the top floor of Hotel 3.14 where you can revel in the plush velvet décor and glamorous company as you watch those star-struck crowds flit past beneath you along the Croisette.

Fine food and famous people inevitably go together, as they did at the former celebrated beach restaurant Tetou. Hailed as the Riviera’s best address for seafood, family-run Tetou had been owned by the Cirio family since the 1920s and celebrities including Mick Jagger, Catherine Deneuve and Angelina Jolie flocked there to order the seafood soup bouillabaisse. Sadly, this celebrated restaurant which was always staked out by the festival paparazzi has now closed.

Instead, I made a beeline for Trattoria Da Laura (9 Rue Du Vingt-Quatre Août), a tiny restaurant housed in a building that once belonged to an oyster vendor where it’s said that the more reclusive stars love to dine.

Although Naomi Campbell and Kirsten Dunst have both been spotted in this authentic little side-street trattoria, I didn’t see any celebrities, but I was definitely dazzled by their sumptuous risotto dotted with fragrant truffles and their handmade foie gras ravioli.

After a long, lazy lunch I strolled through crowded streets to les Allées de la Liberté, where, according to the waiter at Trattoria Da Laura, I might spot celebrities playing boules with their favourite co-stars.

“Don’t expect to be invited to play a game, but if you get there ahead of the crowds you might get a few good pictures,” he said.

Sadly, there were no famous faces on this leafy boulevard where they hold regular craft markets, so I decided to smarten up instead at Salon Hair Platinum where actresses, including The Beach star Virginie Ledoyen, come to get a cut and blow dry during festival time.

Hair trimmed and blow-dried, I took a taxi across town to Nikki Beach La Plage, a pop-up event held on an exclusive strip of sand overlooked by iconic Riviera hotel the Carlton Cannes. During the festival, Nikki Beach organises this pop-up event to show off their unique combination of music, food and fashion.

“Every year we set out to create a destination that gives everyone a beachside location to chill out from their hectic schedules during the Festival,” owner of the luxury beach club Jack Penrod said in a recent interview.

Sipping a succulent red carpet cocktail made with rum, lime and strawberries, I watched Antonio Banderas deep in conversation with a group of friends.

The barman told me that Eva Longoria, clad in a sleek satin Alberta Ferretti gown, was somewhere on the beach. He also told me that most of the stars – including Leonardo DiCaprio who’d joined Brad Pitt on the red carpet for his role in Tarantino’s film Once Upon a Time in Hollywood – had yachted off to Lérins Islands.

He said the festival’s big names often headed for these blissfully peaceful islands, which are deserted apart from the monks of Lérins Abbey, to escape Cannes’ burning sands, blistering pavements and relentless paparazzi.

The Carlton Cannes, whose two domes are said to be modelled on the breasts of infamous courtesan La Belle Otero, is the seaside city’s number one address if you want to watch the stars swan past. It has temporarily closed its doors as part of a restoration programme which is scheduled to end in spring 2023 but the Carlton Beach Club remains open.

If you’re looking for a slightly less flashy – and far less crowded – spot to watch the sparkle, however, head for 3.14 Plage where chef Mario D’Oro serves his market-fresh menu to celebrities ranging from Cameron Diaz to Johnny Depp.

Seeking a sophisticated place to dine I joined a friend at Catherine Deneuve’s favourite restaurant, Le Moulin de Mougins, a short drive inland from Cannes. At this charming restaurant housed in a renovated 16th-century watermill we supped on courgette flowers in a black truffle sauce, Charolais beef fillet and other dishes that put a delicious contemporary spin on Provence’s culinary traditions.

If you can get past the muscled doorman, you’re guaranteed to mingle with Hollywood stars and film mogul millionaires at Le Baoli, but if you’re seeking a hipper version of the celebrity party scene head for Villa des Inrocks (1 Avenue Noailles), an art and music pop-up event that’s held most years in an opulent 19th-century villa built for the Rothschild family. I spent several hours people watching from the stage-view roof terrace of the Rothschild’s villa and wandering in the beautifully landscaped gardens, then it was time for bed.

I was hoping to get a room at the historic Hôtel Martinez just opposite the Croisette Boulevard, but the receptionist told me that I should have booked months ago. Instead, I spent the night at the delightful (and much less expensive) Residhotel Villa Maupassant, an apartment hotel with a large pool just 15 minutes’ stroll from the centre of town.

I ended my 24-hour stay in France’s famous festival city at Glacier Vilfeu (3 Rue Buttura) where film greats, including Leonardo DiCaprio, come to try their handcrafted ice creams. As I wolfed down my crunchy poppy seed sundae, which is one of DiCaprio’s favourites, I’d heard, I was glad that my own non-celebrity status meant that I didn’t have to count those calories.