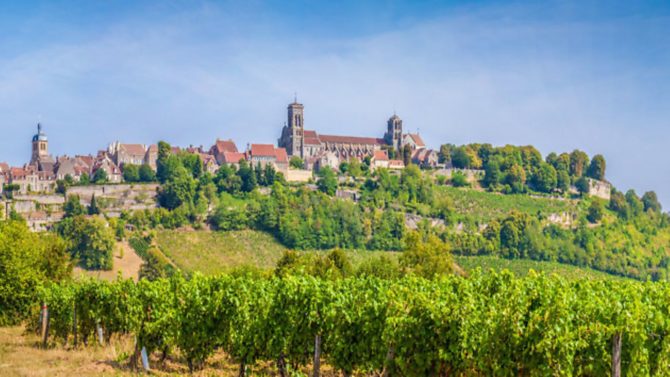 Located in eastern France, the region of Burgundy-Franche-Comté consists of the two former regions of Burgundy and Franche-Comté which were merged into one region in January 2016. The region borders Switzerland and the French regions of Auvergne-Rhône-Alpes, Centre-Val de Loire, Ile-de-France and Alsace-Champagne-Ardenne-Lorraine.

The former region of Burgundy is famous worldwide for its fine wines and the vineyards attract many tourists, however, much of the rest of the region, especially the Franche-Comté area, is largely unknown. Yet it is home to rolling countryside that varies from the Jura mountain range to large forests, historic châteaux and religious buildings, beautiful villages and a scattering of major towns, including Dijon.

The Burgundy-Franche-Comté region is also a great destination for food-lovers, with a number of signature dishes and AOC cheeses washed down with delicious wines. During the summer, the weather is sunny and warm although it does rain and during the winter temperatures can drop below freezing.

Yonne is in the north of the region, close to Paris, and is home to rolling countryside, vineyards, pretty villages and ancient abbeys. The capital is Auxerre.

Nièvre is a small rural department, named after the River Nièvre which runs through it and is home to the Parc Naturel Régional du Morvan. The capital is Nevers.

Saône-et-Loire is located in the south of the region, bordering Auvergne-Rhône-Alpes, and is home to vineyards, countryside and more populous towns. The capital is Mâcon.

Côte-d’Or is named after a limestone escarpment and translates as ‘golden hillside’. It is home to some of the world’s most famous wines and the capital is Dijon.

Haute-Saône is situated between Vosges and Jura and is mostly rural, despite having been at the forefront of industrialisation in the 18th century. The capital is Vesoul.

Doubs is located next to Switzerland and is home to stunning countryside. The capital is the historic town of Besançon.

Jura also borders Switzerland and is a place of unspoilt countryside, boasting one of the largest forests in Europe and the Jura mountain range. The capital is Lons-le-Saunier.

Territoire de Belfort is one of the smallest departments in France and borders Germany. The capital is Belfort.

Plane: There are no international airports with flights to the UK in Burgundy-Franche-Comté but, depending where in the region you are getting to, the airports of Geneva, Lyon, Mulhoue-Basel and Paris are within easy reach.

Train: Dijon and Besançon are only 90 minutes-two hours from Paris by train, making the region only around four hours from London.

Car: The A6 runs from Paris to the north-west of the region and Auxerre is only two hours from Paris. Burgundy-Franche-Comté is about a six-hour drive from Calais.

Places to visit in Burgundy-Franche-Comté

Dijon is the major town in the Burgundy-Franche-Comté region and is famous for its mustard. It is popular with foodies, especially the indoor market in Les Halles which were designed by Gustave Eiffel. Dijon was once a Roman settlement and then home to the Dukes of Burgundy when it became a place of great wealth and power.

Besançon was captured by the Romans and labelled by Julius Caesar as ‘the jewel in my crown’. Besançon is not really on the tourist trail but it is a lovely town full of historic monuments, the most impressive of which is the imposing Citadel, a stunning example of 17th-century military architecture, designed by Vauban.

Nevers stands on the right bank of the River Loire in Nièvre. Many of the buildings were built between the 14th and 17th centuries, one of the more impressive is the 15th-century Palais Ducal. Nevers is famous for its china faïence and if you follow the blue line on the pavement from the Palais Ducal it will lead you to the pottery quarter of the town.

Auxerre has a wealth of abbeys and churches, legacy of its prosperous history throughout Roman and medieval times. Explore the half-timbered houses, relaxed cafes and wine bars of the old town.

Nicknamed the ‘Nice of the east’ and honoured in a song of the same name by Jacques Brel, Vesoul stands at the foot of La Butte de la Motte, a hill on which a castle once stood and around which the town developed. Vesoul is classed as a Cité de Patrimoine thanks to its architectural and cultural heritage.

Near the Auvergne-Rhône-Alpes border, Mâcon is set in the heart of the Maconnais wine-producing area, on the River Saône and has a 150-berth marina, pretty flower-bedecked streets, historic religious buildings and the unique Maison de Bois, whose wooden façade is covered in ribald statues of men, monkeys and masked figures.

Burgundy-France-Comté has a number of châteaux and historic sites to explore. Cluny Abbey was once a Benedictine abbey and the largest church in Christendom, it is now one of the most visited religious buildings in France. Fontenay Abbey is a great Cisterian abbey and a UNESCO World Heritage site. A more modern religious site to visit is the Notre-Dame-du-Haut chapel, built by Le Corbusier in 1955 and instantly recognisable.

Belfort has colourful architecture and ancient ramparts built by the 17th-century military engineer Vauban. Nicknamed the ‘city of the lion’, Belfort is fiercely proud of its strong history and there are numerous statues, fortified buildings and monuments historiques.

There are nine plus beaux villages de France (France’s most beautiful villages) in Burgundy-Franche-Comté. Some to visit are Flavigny-sur-Ozerain, a maze of cobbled streets and medieval ramparts and famous for its aniseed-flavoured sweets; Vézelay which is also an UNESCO World Heritage site and an important pilgrimage site; Pesmes and Noyer-sur-Serein.

Things to do in Burgundy-Franche-Comté

A visit to the region must include a vineyard tour and wine tasting. Try following the Route des Grands Crus wine route which takes you through some of the most prestigious wine areas between Dijon and Beaune. Although not as well known, Jura produces a few notable wines, including Rubis de Jura, Rosé Corail and Crémant du Jura.

The region is also known for its food. Specialities include boeuf bourguignon, coq au vin and oeufs en meurette, all of which use wine in their recipes. Dijon mustard is made in Dijon and charolais beef comes from Charolles. A number of cheeses are also produced in Burgndy-Franche-Comté including Epoisses, Mont d’Or, Comté, Morbier and Bleu de Gex. For dessert try a belfore,a succulent pastry layered with raspberries, meringue-topped almonds and a sprinkling of hazelnuts.

Burgundy-Franche-Comté isn’t just about vineyards either, the region boasts some stunning countryside which is popular with hikers, cyclists and nature-lovers. The Jura mountain range is France’s premier cross-country skiing area and hosts one of the world’s toughest cross-country skiing events, and is popular with hikers in summer. The Parc Naturel Régional du Morvan is 1,000m² of unspoiled countryside and a protected area of woodlands, lakes and farmland, crossed by streams, rivers and waterfalls and dotted with traditional villages. The fôret de Chaux is one of the largest forests in Europe and home to a vast range of flora and fauna and hiking trails. For a more gentle way to explore the countryside, try a boat trip along one of the canals – a popular past time in Burgundy-Franche-Comté.

Most of the region’s festivals also centre around food and wine. In November the eagerly anticipated release of the Beaujolais Nouveau wine has a festival based around it, the Hospices de Beaune holds an annual wine auction and Dijon holds an annual International and Gastronomic Fair. Away from food and wine, there is the Eurokénnes music festival and a monthly brocante in Belfort which is the largest in eastern France.

The Burgundy-Franche-Comté region is fairly cheap for property and most areas are below the national average property price of €158,000 for France. Some areas around large towns and popular vineyard villages are more expensive but it is easy to find a rural farmhouse for a good price.

In the region’s countryside you will find plenty of farmhouses whose styles differ slightly depending on the area and along with these farmhouses you can often find barns to renovate. Around the vineyards, common properties are maisons vignerons (wine-producer’s houses) and also maisons de maitre, built by the wealthy landowners. In the former region of Franche-Comté a common property is maisons en Pignon which are front-gabled houses often built in valleys with fabulous views. Another common property type, especially in the department of Yonne, are half-timbered houses.

Find out how and why France’s regions changed

10 outstanding vineyards in France to visit