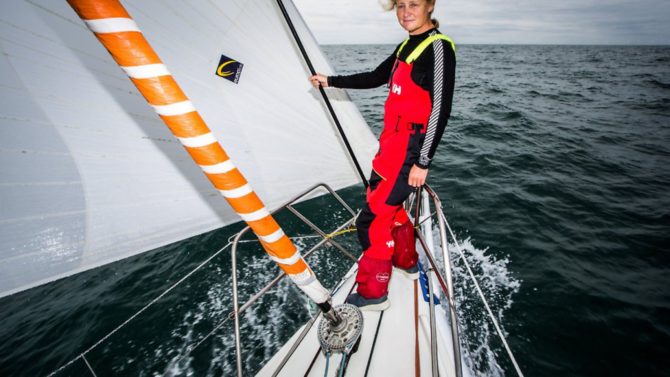 As the ninth edition of the Vendée Globe begins in Les Sables d’Olonne, British yachtswoman Pip Hare tells us about her love of France and what inspired her to take part in the round-the-world yacht race as she aims to beat Ellen MacArthur’s world record

What is your first memory of France?

When I was four or five my family visited Biarritz on a camping holiday. I remember the very long, sandy shoreline.

Do you have a favourite place?

It probably comes as no surprise but I really enjoyed sailing across the Channel to Calais as a child. I really love Brittany it holds many happy memories.

What is your favourite French delicacy?

What are the three things you always pack?

A tiny towel, sunscreen and the third is a pocket-knife.

What do you eat at the end of a long race?

The taste of fresh fruit is incredible when you have been at sea. During the race I will be living off a diet of freeze-dried food and nutritional supplements. I drink water, from my desalinator – which turns sea water into fresh water allowing me to enjoy a lot of tea!

What inspired you to become a yachtswoman?

More men have walked on the moon than women have completed the Vendée Globe, which is all the inspiration I need to succeed.

When did you first think about taking part in the Vendée Globe?

I read about the race when I was in my late teens. I had just really fallen in love with sailing. I picked up a second-hand magazine, which had a race report on the Vendée Globe and I was instantly captivated. The fact that one person could race solo around the world in a boat that big and powerful, the fact that men and women competed on equal terms. There was no question in my mind, from that moment I knew this was something I wanted to do.

What speed does your boat go?

I have had Medallia, which is 60ft, up to 28 knots and it was a wild ride. That is 32 miles an hour. The newer boats will go a lot faster than this, but mine is 20 years old so it’s a good speed for the age of the design.

Pip Hare spoke to Janet Brice for the November 2020 issue of FRANCE Magazine. Click here to order single copies or here to subscribe

Sun, spas and cycling in Vendée