Where to celebrate Bastille Day in France 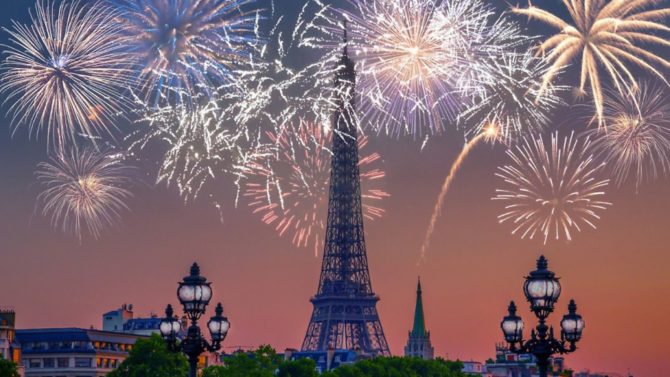 Are you going to be in France on 14 July? Here is our pick of the places to go to celebrate France’s most important national holiday, Bastille Day

One of the best places to celebrate France’s national holiday is on the tree-lined Champs Élysées in central Paris. The two-kilometre-long thoroughfare is covered in blue, white and red decorations, and hosts a huge military parade. A march, led by the French president, runs from the Arc de Triomphe to Place de la Concorde, while fighter jets fly past in formation. The events starts around 10am with the parade actually setting off at 10:30.

The area in front of the Eiffel Tower known as the Champs de Mars is the setting for a moving classical music concert where the works of Puccini, Mozart, or Verdi will be interpreted by the Orchestre National de France and Radio France’s choir from 21:30. Following that, the yearly spectacular 30-minute-long fireworks display will be fired from the Trocadéro and is best enjoyed from the Champs de Mars. Get down there to bag yourself a prime position for a dazzling spectacle of choreographed fireworks against the backdrop of the Parisian night sky.

After a stunning firework show, what is better than dancing the night away with a group of fire fighters? Fire stations across the capital open their doors on the 13 and 14 July until the early hours for traditional firemen’s balls where young and old can enjoy a good old boogie.

Get your dancing shoes on for Lyon’s festivities, which usually take place on the quays of the Saône between Pont Maréchal Juin and Pont Bonaparte. Music of all genres is performed on stages and everyone is invited to boogies on down. The Fireworks display takes place near the striking Basilica of Notre-Dame de Fourvière, with the colourful explosions basking the church’s striking towers in beautiful, photogenic light.

This medieval walled city in the south-west of France will focuses its attention on an incredible fireworks display at 22:30 on 14 July – billed as one of the best in the whole country. The 30-minute show is set against the spectacular backdrop of the Cité, over the 600-metre-high walls. In the middle of the display red smoke is released to give the effect that the city is burning.

Stunning images capture energy of the mistral wind in France

You won’t be able to move for people draped in rainbow tricolores and with the familiar red, white and blue stripes painted on their cheeks! The great Vieux Port here hosts a wonderful fireworks display; one of the biggest in France, in fact. Get a place at the beautiful harbour early for the best view.

The Pink City is the setting for a spectacular free concert on the 14 July with some big names business including Bigflo & Oli and France’s 2009 Eurovision entry, Bilal Hassani there to help music lovers get their groove on. And once everyone is all tuned out, they can end the evening in style by watching the impressive firework display, shot from 24 boats on the Garonne.

This wine-making city has plenty going on to celebrate Bastille Day. Highlights include the military parade which passes through the city centre to the tune of La Marseillaise, and the Grand Ball, where you can dance until it hurts to the sweet sounds of jazz. The evening culminates with a fireworks display best enjoyed from the riverbanks at 22:45.

Previous Article 7 unique shopping experiences in Paris
Next Article In pictures: Château and gardens of Chaumont-sur-Loire in France