Are these the best swimming pools in France? 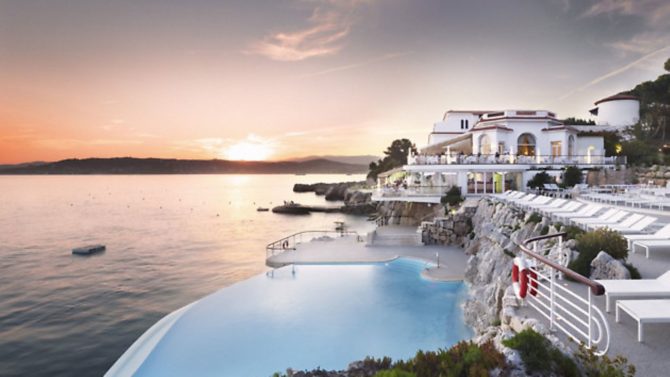 Need to cool off this summer? Take the plunge in one of the amazing swimming pools dotted around France, from historic lidos to extravagant infinity pools

The landmark hotel at Cap d’Antibes was considered a winter destination until 1914, when its owner dynamited the basalt rock above the bay to create a cliff¬side pool to attract summer guests. Today the 33-metre heated infinity-edged pool remains the pinnacle of Riviera chic, positioned on a secluded terrace overlooking the Mediterranean and accessible only by private funicular railway from the main hotel. A diving board, hoops and ladders are suspended over the cliff edge while the poolside terrace is a favourite spot for guests to sip cocktails and admire the panoramas stretching from Juan-les-Pins to the Estérel coastline.

This historic monument in Pas-de-Calais is one of the few public art deco swimming pools remaining in France. The open-air pool dates from 1936 and features a streamlined design inspired by the transatlantic liners of the inter-war era: there are plunging curved shapes, gleaming white symmetrical cabins and dramatic geometric brickwork that make swimming a feast for the senses.

Built in the 1920s by Rennes architect Emmanuel Le Ray, the city’s first municipal pool is an unsung architectural gem of the Brittany capital. Attention to detail is what makes the place so special, particularly in the intricate mosaic patterns designed by Breton artist Isidore Odorico, whose work adorns many public buildings in northern France. His handiwork here includes glazed sandstone motifs on the facade of the impressive entrance and a 96-metre-long frieze inside the pool itself.

Head west out of central Paris and you’ll come to the upmarket suburb of Neuilly, which is home to a large water park set among its residential streets. A wave-shaped roof covers the three interior pools, which comprise a seven-lane sports pool, a play pool and an area for beginners. In summer, bathers head outside and relax on a man-made beach beside a 110-square-metre pool that looks on to the centre’s gardens.

Built in the 1920s and listed as a historic monument since 1990, this stunning art nouveau pool in the 13th arrondissement is filled with invitingly warm water supplied by a natural hot spring. Behind the ornate red-brick facade, the main 33-metre pool stretches out under a striking, high-vaulted roof and is surrounded by decorative canary-yellow tiles. In the two smaller outdoor pools, prepare to contend with sun-loving city dwellers who jostle for towel space during the summer.

Constructed on the outskirts of Strasbourg by French architect Bernard Schoeller in the 1980s, Lingolsheim’s recently renovated pool complex looks otherworldly with its UFO-shaped steel-framed dome punctuated by oval windows that cast beams of light on to swimmers. Changing rooms are housed in a boomerang-shaped extension and on sunny days, the dome’s panels slide open to expose a third of the interior to the elements.

Award-winning architect Jean Nouvel is behind possibly France’s coolest pool complex, opened as part of an effort to revitalise the Normandy port’s dockland and warehouse district. The sleek, futuristic design is a modern take on classic Roman baths in which a network of inter-connecting pools are decked out in white mosaic and geometric concrete boxes that give a pervasive sense of water and light to both interior and exterior spaces. The Olympic-sized swimming pool is open to the elements all year, while more than six interior pools create an oasis of serenity with their jet-stream massages, waterfalls, cold and hot baths and saunas.

Head for the 20th arrondissement to swim in the wake of champions at the Georges-Vallerey complex, which opened for the Olympics in 1924. It hosted 11 swimming, diving and water polo competitions, with American swimmer Johnny Weissmuller (later star of the Tarzan films) winning gold in the 400 metres freestyle. In summer, the roof on the 50-metre pool is retracted and the sun shines down on bathers, while a separate pool is reserved for children.

A relaxing swimming experience is guaranteed at Balnéa in the Hautes-Pyrénées where a soak in the spa’s thermal waters will wash away your worries. Set on the edge of a lake and ringed by Pyrenean peaks, the complex has an array of pools, each with its own theme; there’s a glass-fronted Roman bath with mountain views, an Inca empire with temple and statues for family swimming, and a Japanese onsen where three pools, each warmed to different temperatures, are spread around manicured gardens and a tai chi pavilion to help to harness your inner zen.

The thermal waters of Bagnères-de-Bigorre, a spa town in the northern foothills of the Pic du Midi, have been highly prized for their rejuvenating effects since Roman times. These bygone pleasures survive the test of time in the Pyrenean town’s state-of-the-art spa and pool complex, Aquensis. The main pool is a cathedral-like structure, supported by a vast wooden framework of lofty beams and chalet-like changing booths. Look up to see swimmers lapping the glass-bottomed pool in the roof or head outside to enjoy saunas, whirlpool baths and deckchairs while enjoying the sunshine and mountain air.

Possibly the closest you’ll get to swimming in the Seine is in the Joséphine Baker floating pool, a glass and steel hub anchored to the riverbank in the 13th arrondissement just beside the French National Library. When the roof opens in summer, look up from to catch fantastic views of the capital’s romantic waterway running right beside you. The 25-metre pool is supplemented by a café, gym, sauna and solarium, providing city-dwellers and in-the-know visitors with the ultimate in Paris chic.

Urban swimming doesn’t get much better than at this pool complex – also known as the Piscine du Rhône. Sitting right on the quayside overlooking the river, it was built as part of the city’s bid to stage the 1968 Olympics and has recently been refurbished. The complex includes a 50-metre outdoor pool (heated in winter), where you can take in the glorious views as you swim, as well as attractions for the whole family including a tide river, paddling pool and diving course.

You can leave your swimming costume at home to visit Piscine Roubaix, a short metro ride north-east of Lille, where a disused art-deco municipal swimming pool has been imaginatively transformed into an art gallery with a difference. A jumble of sculptures flanks the central swimming pool, which remains filled with water, while artwork hangs in the tiled shower cubicles-turned-exhibition areas. Although swimming may be off limits, the pool’s history can be traced through original bathing memorabilia dotted around the gallery and old photographs showing bathers during its 1930s heyday.

Built in the 16th arrondissement almost a century ago, Molitor was once a trendy hangout for the young and beautiful of Paris; the place where the first bikini was unveiled and topless sunbathing took off. After falling into disrepair and being abandoned in the 1980s, the pool was lovingly restored and reopened in 2014 as part of a resort hotel and sports club. Hotel guests and club members have the use of a three-storey complex with sleek, ocean-liner-like architecture and two pools; one indoor and heated and the other outdoor with glossy white balustrades and tiers of changing cubicles.