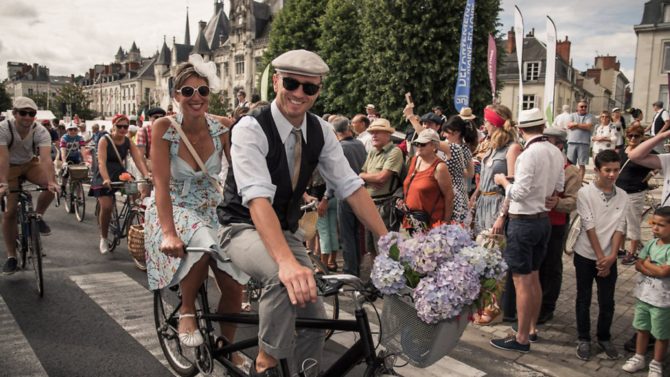 Cycling through the Loire Valley past vineyards and châteaux, dressed in vintage clothes and riding a retro bike… what’s not to love about the Anjou Vélo Vintage?

“Fancy going to a cycling festival in the Loire?” asked my editor. “Me?” I thought, half-expecting that she was talking to some Lycra-clad person behind me. I didn’t see myself as the cycling type, considering my experience was limited to freewheeling downhill to the shops. But my editor was not proposing a trip to the Tour de France; she was suggesting a visit to Anjou Vélo Vintage (AVV), a two-day retro cycling festival for anyone who loves bicycles, music and times gone by. It was a very different sort of festival to the one I had first imagined, and turned out to be much more up my street.

Launched in 2011, Anjou Vélo Vintage is held in the town of Saumur on the River Loire over a long weekend in June. More than 6,000 cyclists and around 30,000 spectators come for the riding and to visit the Vintage Village, with its bric-a-brac market, vintage stalls, music and more. The 2019 festival takes place on 5-7 July.

I arrived on the Saturday morning to the sound of jazz music blaring from old gramophones, in good time to pick up a bike. I would have liked to have brought my own, but my modern model would have been frowned upon in this nostalgic ride; bikes are meant to date from before 1987, and many are much older. Hiring a bike was hassle-free, and cheap at €20 for the day. Staying true to the festival’s vintage ethos, all of the hire bikes looked as if they had been around the block a few times, but that was all part of the charm, I reassured myself, hoping the screeching brakes on the 1980s model would work when necessary. I also picked up a goodie bag given to each participant, which contained locally made chocolate, a route map, a ‘passport’ filled with food and drink vouchers, and – most importantly – a plastic wine glass.

I have to admit, the prospect of style spotting excited me more than the actual cycling. From flared 1950s-style dresses for the women to cigarette trousers and silk cravats, moustaches and braces for the men, the fashions of the past were brought back to life with originality, soul and a healthy dose of silliness. I had already seen a man dressed as a priest, and a woman contending with a penny-farthing, and it was only just 10am.

Among such a glamorous set, I felt slightly underdressed in my baby-blue playsuit and yellow daisy sandals. Thankfully, the Vintage Village was there to help, with stalls selling everything from tweed waistcoats to petticoat dresses, and the vintage-inspired hair stylists and make-up artists ready to complete our transformation. I found a classic headscarf, popped on a pair of cat-eye sunglasses and a slick of red lipstick – et voilà! I looked like a 1950s starlet.

Dressed for the part and with my hired bike to hand, I was ready for the off. There were several circuits available on both days, ranging from 30 to 120 kilometres. At 35 kilometres, the Abby Cyclette (3/5 in the difficulty rating) seemed a sensible option for a relative novice. Starting at Saumur, like all the routes, it went through the villages of Bagneux, Munet, Chacé, Saint-Cyr-en-Bourg, Brezé and Souzay-Champigny, passing many vineyards along the way. A happy coincidence, I smiled, surveying the map.

I wheeled my bike to the starting line on the banks of the River Loire and joined the 200 participants on my ride. They were the most colourful, jubilant and noisy group of cyclists I had ever encountered, and I was happy to be part of that sea of cheer. As everyone rang their bike bells in anticipation, the start was announced and we were pedalling along the riverbank to the sounds of retro music and cheers from the crowds. It took a few attempts to steady myself – vintage bikes are not as sturdy as their modern equivalents – but then I was off on my first cycling event, and only slightly nervous about the road ahead.

Whatever trepidation I had about keeping up with the others quickly faded away. The cyclists were obviously taking part for the sheer fun of it and I immediately got on board with the Gallic go-with-the-flow spirit. The pace could be as slow or fast as you wanted and I was happy to take my time, waving at well-wishers and taking in the Instagram-worthy streets, before turning off the beaten track and into the Loire countryside.

It was actually difficult to get too tired, as there were five refreshment stops along the 35-kilometre route. The first came after nine kilometres: everyone left their bikes and headed to a beautiful courtyard for a breakfast of home-made apple juice and fresh pastries. As with all the pit stops, breakfast was accompanied by wonderful music; a performer of romantic songs accompanied herself on the accordion, as many couples waltzed merrily. But we were soon back in the saddle, traversing downhill bends and country roads that led us past rows of sunflowers, wheat fields and centuries-old vineyards.

Having to contend with a relatively steep hill, meant the second stop was more appreciated and perhaps more necessary than the first. Following the signposted route, we were directed through a winery yard that led to underground cellars. Although the cool, dark passages were a relief from the June sunshine, it was a challenge to see where I was going, so it was a relief to emerge into the sunlight, to the sounds of a Beatles tribute band rocking out classics including Drive my Carand Get Back. It was time for my first glass of wine – a chilled, crisp rosé from the estate – and a goat’s cheese sandwich. I could easily have spent the 30-minute stop slumped under a tree in the shade, but the breaks were not made for slacking, but for dancing, so I tried to learn a few 1960s steps from the experts.

While cyclists at other events might refuel with energy bars or a glucose drink, refreshment at Anjou Vélo Vintage always involved wine and delicious food. The lunch stop was much more of a sit-down affair: a platter of chicken and rice, pasta, apple tart, cheese and bread (and yes, more wine) that we enjoyed under the shade of an awning to the sounds of a bluegrass band.

Our final stop was in the grounds of the Château de Saumur, a fairy-tale setting to round off such an unforgettable race, where our reusable glasses were filled with crémant de Loire sparkling wine. Thankfully, it was mostly downhill from the château, and in my crémant haze, I rode all the way down without a care in the world, not thinking about my rusty, squeaky brakes.

Six hours after setting off, I crossed the finishing line back in Saumur. Throwing my arms up in the air, ecstatic at having not fallen off my bike, and high on the fun I had had, I posed for a victory photograph. My legs and questionable brakes had made it.

The end of cycling did not mean ice-cold baths and an early night. After returning my bike, I went back to the hotel to change into my party dress, ready to celebrate my first, but not my last bike festival.

Festivities lasted well into the early hours, with music concerts, food trucks and pop-up bars. I marvelled at the enviably stylish partygoers whose dancing to retro tunes was so effortless and a marvellous throwback to a sweeter time.

What made Anjou Vélo Vintage so special for me was that it was more than a celebration of cycling; it was a celebration of all things French – its food, music, wine and, most importantly, its infectious joie de vivre.

What’s on in France?

Previous Article Enjoy a multi-activity holiday in the French Alps this summer
Next Article How much tax do you pay on a UK pension in France?