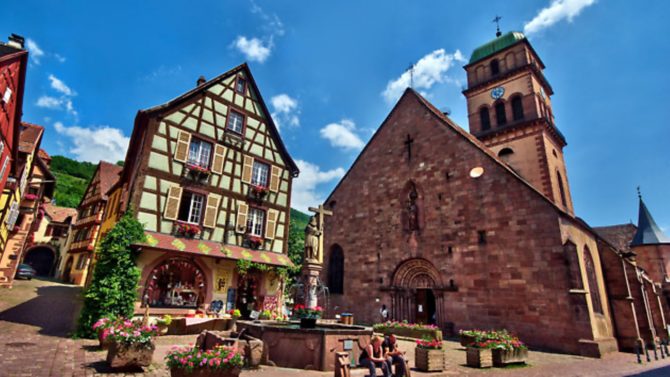 Located in the north-east France, the region of Alsace-Champagne-Ardenne-Lorraine was created in January 2016 and is made up of the former regions of Alsace, Champagne-Ardenne and Lorraine. Bordering Belgium, Luxembourg, Germany and Switzerland, the former regions of Alsace and Lorraine have been hotly contested over the years switching between being controlled by France and Germany several times. As a result there are a number of Germanic influences in the region, from food specialities to place names.

Alsace-Champagne-Ardenne-Lorraine boasts beautiful countryside and a number of vineyards, including the world famous champagne vineyards. There are also forests, rivers, the Vosges mountains and several large towns including Strasbourg, Metz, Nancy and Reims.

Ardennes borders Belgium and is named after the Ardennes forest which is popular with hikers. The capital is Charleville-Mézières.

Marne is where you will find the majority of the region’s champagne houses and vineyards. The capital is Châlons-en-Champagne.

Aube is on the champagne tourist route and has more historical monuments than any other in France. The capital is the fashionable town of Troyes.

Haute-Marne borders Burgundy-Franche-Comté in the south of the region and is a haven for nature lovers. The capital is Chaumont.

Meuse was one of the great battlefields of WWI and the legacy can still be seen in the department. The capital is Bar-le-Duc.

Meurthe-et-Moselle is in the centre of the region and it is named after the two rivers than run through it. The capital is Nancy.

Moselle borders Luxembourg and Germany and has strong historical and cultural connections with them. The capital is Metz.

Vosges is a largely rural department including unspoilt forests and the Vosges mountains. The capital is Épinal.

Bas-Rhin in the north-east corner of France is dotted with ancient churches, medieval castles and pretty villages. The capital is the city of Strasbourg.

Haut-Rhin borders Switzerland and Germany and has a rich history to explore. The capital is Colmar.

Plane: There are regular flights to Basel-Mulhouse and Strasbourg airports from the UK or it is only a 90-minute drive to Reims from Paris Charles de Gaulle airport

Train: Strasbourg is less than 2 hours from Paris and Reims is only 45 minutes by TGV train

Car: The A4 autoroute runs from Paris to Alsace-Champagne-Ardenne-Lorraine and Reims can be reached in around 90 minutes, Strasbourg in just over 4 hours. The ferry port of Calais is about 2 and a half hours from Reims and Strasbourg is just over 5 hours.

Places to visit in Alsace-Champagne-Ardenne-Lorraine

Strasbourg is a cosmopolitan city located on the French-German border and has a culture and architecture that reflects the influences of its French and German history. Strasbourg is the seat of several EU institutions, including the European Parliament, the Council of Europe and the European Court of Human Rights all housed in ultra-modern buildings. Highlights of the city include the pink granite gothic Cathédrale de Notre-Dame, the Musée des Beaux-Arts, and the twisting lanes and half-timbered houses of the Grand Île, an UNESCO-listed area. Visit Strasbourg in December to experience one of the oldest and biggest Christmas markets in France, with 300 stalls of festive gifts.

Mulhouse is France’s museum capital, including the Musée de Papier Peint dedicated to wallpaper and the Cité de l’Automobile with more than 400 cars. Visit the 16th-century Hôtel de Ville known for its trompe l’oeil paintings and the Place de la Bourse.

The town of Colmar is one of the stops on the Route des Vins d’Alsace and is the self-proclaimed capital of Alsatian wine. Its tiny twisting streets flanked with half-timbered houses are reminiscent of a medieval folk tale. The Petite Venise quarter is criss-crossed with picturesque canals, and is a delight to discover either on foot or by boat.

Nancy has three UNESCO-listed squares; the Place Stanislas, Place d’Alliance and Place de la Carrière which are among the finest 18th-century architecture in France. The École de Nancy was the birthplace of Art Nouveau and has the work of Emile Gallé and his contemporaries on display, and the Saurupt district has some of the best examples of architecture inspired by the movement.

Given the label of a Ville d’Art et d’Historie, Troyes is known for its beautiful architecture. The historic centre is shaped like a champagne cork with 10 magnificent churches, 16th-century hôtels particuliers and half-timbered houses. Troyes is also known for its shopping with many factory outlets attracting those looking for a bargain and it is a popular stop on the champagne route.

Metz stands on the banks of the Rivers Moselle and Seille and is a Cite d’Art et d’Historie with a heritage dating back 3,000 years to Gallo-Roman times. Visit the 13th-century Cathédral Saint-Etienne, stroll down the Avenue Foch, the arcades of the Place Saint Louis and the covered market hall. Don’t miss the modern and contemporary art gallery the Centre-Pompidou Metz, the first decentralised centre of Paris’ Pompidou Centre.

Often eclipsed by the nearby champagne hotspots of Reims and Épernay, Châlons-en-Champagne offers its own charms. It is home to the national school for circus arts as well as a multitude of heritage buildings, from churches, cloisters and medieval caves to houses listed on Place du Maréchal Foch that are listed as historic monuments.

Reims is a must visit, with its vast cathedral featuring Chagnall-designed stained glass and masterful stonework. Reims was meticulously restored after WWI and WWII and there’s plenty of Art Deco architecture. Reims is an important centre for champagne production and a number of champagne houses are based in the town.

Épernay is the self-proclaimed capital of champagne and is home to many of the world’s most famous champagne houses, including Moet-et-Chandon and Mercier, housed in grand mansions on the Avenue de Champagne. Under the streets are kilometres of cellars housing champagne.

There are seven Plus Beaux Villages de France in Alsace-Champagne-Ardenne-Lorraine. Five of these are pretty Alsatian villages – Hunawihr, Riquewihr, Eguisheim, Hunspach and Mittelbergheim. Saint-Quirin is set in the foothills of the Vosges mountains and Rodemack is known as ‘Petite Carcassonne Lorraine’ because of the 15th-century ramparts which still surround it.

Things to do in Alsace-Champagne-Ardenne-Lorraine

Alsace-Champagne-Ardenne-Lorraine is perfect for nature lovers, whether you prefer rolling vineyards, lush mountains, dense forests or peaceful rivers. The Ardennes forest is around 150,000 hectares of woodland which attracts walkers and mountain bikers. The Orient forest in Aube was one of the first natural parks created in France and Vosges and Haute-Marne both have large forests. Canals, lakes and rivers cross much of the region and are popular both for watersports and for fishing.

The Vosges mountains are popular with walkers, horse-riders and mountain bikers while the sunny foothills of the Vosges range are home to fine white wines, many of which are included on the Route des Vins d’Alsace. Winter sports enthusiasts should make their way to La Bresse-Hohneck, the largest ski area in north-east France, with 21km of pistes and 21 lifts.

Given the region’s location it is hardly surprising that much fighting occurred here during WWI and WWII, including the infamous Battle of Verdun. You can see remains of the trenches and many memorials across the region. It’s not just recent history that is evident here, head to Domrémy-la-Pucelle for the birthplace of Joan of Arc or the castle in Sedan for the largest medieval festival in Europe in May.

Champagne is obviously the drink of choice in Alsace-Champagne-Ardenne-Lorraine and there is no shortage of it! Also try some of the Alsace wines and the local beers. You will notice the Germanic influences in the food of the former Alsace region, including baeckeoffe, kouglof, tarte flambée and choucroute. To experience these in their natural setting, dine at a Alsatian winstub. The most famous export of Alsace-Champagne-Ardenne-Lorraine has to be quiche Lorraine and you may also have heard of andouillette (tripe sausage). With the number of rivers and forests in the region it is hardly surprising that game, fish and cured meat are popular here.

One of the best times to visit Alsace-Champagne-Ardenne-Lorraine is at Christmas because the region really gets into the Christmas spirit. There are several Christmas markets (marchés de noël) that are worth visiting include Strasbourg, one of the oldest Christmas markets in France, Mulhouse and Colmar.

Although popular with tourists the Alsace-Champagne-Ardenne-Lorraine region is less popular with property buyers, despite its beautiful countryside, fine food and wine and great transport links. This means property prices are relatively low compared to the rest of France (average property price around €158,000).

The common property style in Alsace-Champagne-Ardenne-Lorraine is half-timbered houses, often brightly coloured. These beautiful houses characterise the old towns in Strasbourg and Colmar but can be found across the region. Among the vineyards you will find plenty of grand chateau, maisons de maitre and maisons vigneons built by the wealthy landowners and there are also lots of farmhouses. In the Vosges mountains you will find chalets.

Don’t miss our guides to the other French regions, including:

The changes to France’s regions explained

Previous Article 6 things to consider before you sign for a French property
Next Article Win ! Season two of the award-winning TV series The Tunnel on DVD