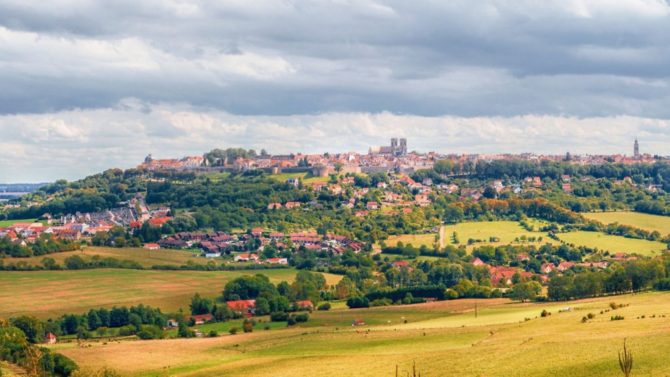 Rich in history and beauty, the hilltop town of Langres in north-east France is well worth a visit

“Our next stop is Langres,” says the train’s conductor. Minutes later, the fortified town comes into view, seemingly floating above a thin level of white cloud. Perched on a rocky promontory in the southern fringes of the Grand Est region, Langres has often been described as one of the finest towns in France and has been a popular stop-off for people moving between Paris and the east of the country and beyond for centuries.

Testament to Langres’ strategic importance in centuries past are its ramparts, which were first constructed in the 4th century, and today extend 3.5km around the hilltop town. I arrive firstly in front of the Tour Navarre. This solid structure, standing 20 metres tall with 7m-thick walls, has helped ensure Langres was never taken by the many groups of people who came and went through the ages.

Today, the tower serves as the gateway for visitors to the ramparts, where you can enjoy breathtaking views over the surrounding countryside. After a calf-straining climb to the top, I look west to find the lush Bonnelle Valley, while in the east I take in the nearby Lac de la Liez, the Marne Valley and the Vosges mountain range in the distance.

A few minutes’ walk further along the ramparts lies the Tour du Petit-Sault. Built at the beginning of the 16th century to protect the access to the western side of the hilltop town, this structure served as a fortified gun and watchtower. I spend a few minutes here taking in the splendid town vista: clusters of Burgundy red-topped rooftops and honey-hued facades that glisten in the early summer morning light.

I descend from my vantage point and head towards the historic centre. I amble along a couple of twisting streets towards two towers that stand proudly above the rooftops over Langres. They belong to the imposing Cathédrale Saint-Mammès; built in the 12th century, the cathedral serves as the seat of the Bishop of Langres, who once ruled a vast diocese stretching from Champagne to Burgundy.

Just a few streets away I get a further glimpse into the town’s long past at the Musée d’Art et d’Histoire de Langres, housing archaeological collections dating back to the Gallo-Roman period, the Mosaic of the Triumph of Bacchus from the 2nd century, as well as paintings and sculptures from the 17th, 18th and 19th centuries. Completed in 1996, the contemporary building mirrors its surroundings: its curved shape reflects the layout of the streets while the windows represent the narrow width of nearby houses.

I have left the best for last. After a gentle mosey along streets lined with elegant medieval townhouses, I finally arrive in Place Diderot. Named after the town’s most famous resident, this quaint central square is sprinkled with charming cafés and flower-bedecked stone buildings, all facing an imposing statue of philosopher Denis Diderot, who once proudly said of Langres: “This is my land.”

All that remains for me to do is pull up a chair, order a cold drink and soak up the French chatter that fills this square. “What do you think of our hilltop town?” enquires the waiter. “It’s lovely, rural France at its best,” I reply. It’s well worth a visit.

Cider and cycling in peaceful Brittany

Previous Article Coronavirus: what is the current situation in France?
Next Article Learn about the wines of Occitanie at an online wine school