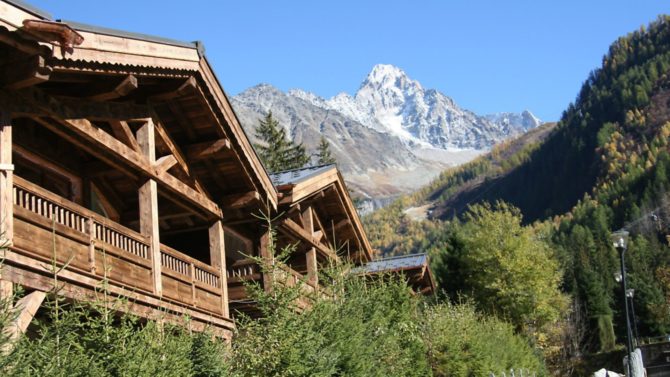 Don’t dismiss the mountains of France as a purely winter destination – they also make the perfect summertime retreat. Pack your hiking boots and head off to one of these paradises in the peaks…

Spend a memorable night under the stars in a ‘bubble dome’ perched in the trees or on stilts in an Alpine forest. The transparent domes let you admire your surroundings to the full with squirrels, deer and foxes just metres away. The domes at Bulles d’Aulps include a double bed, table and chairs, washbasin and exterior dry toilet, and a wooden platform to enjoy breakfast and dinner. The village is only a few minutes’ walk with its hiking and mountain biking trails.

From €139 per night based on two people sharing. Breakfast is included, other meals from €20.

Lying in the heart of the Volcans d’Auvergne regional park, Instants d’Absolu Ecolodge and Spa is an ideal retreat for nature lovers, with wildlife on the water and in the surrounding pine forest to discover, and the extinct volcanoes to explore. There are 12 bedrooms and suites, all individually decorated, and no televisions or phones, so you can escape the wider world and appreciate the natural environment. There is also a gourmet restaurant and spa, as well as a hot tub overlooking the lake.

Doubles from €125pp based on two sharing, including breakfast, dinner and access to the spa.

Here is your chance to spend a night ‘between the earth and the sky’ in a treehouse with views of the Mont Blanc Massif. At Cabanes Entre Terre et Ciel there are three styles of huts, all accessed by a folding ladder, and with dry toilets and a shower The one-bedroom Cabane Nid is built like a nest and has a 30m² roof terrace. Cabane Mont Blanc is a luxury treehouse with a spa and sauna, and sleeps up to four. If you are travelling with children, Cabane du Ruisseau, with its 12-metre rope bridge, a slide and a play area would be perfect.

Cabins from €280 based on two people sharing, breakfast included.

Few places are as legendary in the world of mountaineering as the Mer de Glace. The seven-kilometre-long glacier facing Mont Blanc spills from the summits towards Chamonix and has fascinated and attracted visitors for decades. In the late 18th century, the Grand Hôtel du Montenvers, at 1,900 metres, welcomed the first travellers and mountaineers. Later, its popularity dwindled and for years it was left to fall into disrepair. But after renovations by Maisons et Hôtel Sibuet, the Terminal Neige Refuge du Montenvers opened for its first winter season last December. It is impossible to drive up, so access is done by foot, skis or a 20-minute ride on the red cog-train from Chamonix. There are 20 rooms and suites, as well as a dormitory under the eaves. Rooms are furnished simply but with taste, celebrating the mountaineering heritage.The attention to detail is striking, from the red key rings mimicking climbing ropes to the branded tin mugs.

For true escapism in the great outdoors, head to this beautiful and preserved site in the Haut-Jura regional park, where the owners breed llamas and sheep as well as providing accommodation in a tree house, a traditional roulotte caravan or a hunter’s hut. Each lodging at Les Loges du Coinchet is equipped with a woodburner, a water reserve, candles and torch, and dry toilets while showers and a sanitary block are located in the restored main farmhouse. Breakfast is brought to you at your preferred time. Make sure you say hi to the llamas – either by visiting the farm or going on a walk with the animals through the mountains.

These three new luxury chalets lie next to the Grands Montets ski area and look over Mont Blanc. Each of the Chalets des Grands Montets has three bedrooms sleeping up to six people, but their styles are different: La Ferme d’Estelle is a typical mountain farmhouse; L’Alpage de Paul is designed like an Alpine pasture chalet; and L’Atelier de Charlotte resembles an artist’s workshop. The centre of Argentière is a ten-minute stroll, and there are plenty of ski slopes and hiking trails within walking distance of the chalets.

Chalets from €470 per night for six people.

For a grand stay in the southern Vosges mountains, head to the 19th-century Château de la Houillère, once home to the owners of the local coal mines. The guesthouse has five bedrooms, all elegantly decorated in keeping with the building’s heritage, and three lounges. The castle is set within a three-hectare park and is 30 minutes from Belfort. Several hiking trails lead from the property, which makes an ideal for exploring the Ballons des Vosges regional park.

Doubles from €108 including breakfast.

8 reasons to visit the French mountains this summer

The beautiful French mountain lakes you have to visit

Previous Article WIN! Versailles: Complete Series 1 – 3 Box Set
Next Article How to set up your home and car insurance in France

By Sophie Gardner-Roberts And Emma Rawle