7 French aquariums for the whole family to enjoy 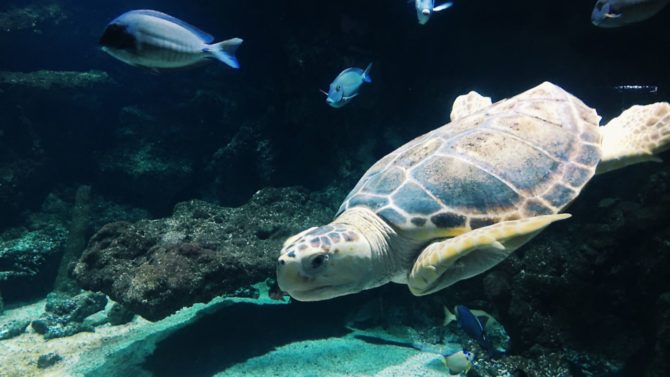 There’s no need to don your diving gear to glimpse France’s marine life; the country boasts some amazing aquariums that will keep young and old transfixed for hours. We’ve selected seven of our favourites that you’ll want to add to your itinerary.

This year, Nausicaá became the biggest aquarium in Europe – and one of the largest in the world – after an ambitious extension doubled its size. It is home to almost 60,000 animals, including imposing hammerhead sharks and stingrays who glide over visitors as they walk down an 18m long glass tunnel. Educating its visitors about the plight of the marine environment is at the heart of Nausicaá ethos, which has seen it become the first institution in the world to be labelled a Centre of Excellence by Unesco’s Intergovernmental Oceanographic Commission.

P.s. Check your September issue of FRANCE Magazine for an in-depth guide to Nausicaá!

Who knew you could visit Earth’s greatest seas in just two hours? A trip to the Aquarium de La Rochelle on France’s west coast is a whistle-stop tour of the Atlantic, the Caribbean and the Indian Oceans. Pay a little extra for an audioguide-led tour of the mesmerising tanks; there’s even a tour for younger visitors led by Antioche the turtle.

Oceanopolis is divided into three different pavilions: a tropical pavilion, with a one-of-a-kind ‘wall’ of living coral; a polar pavilion, where Europe’s largest penguin colony lives; and a Brittany pavilion, complete with touch-pool to stroke some friendly fish. Another highlight is France’s first otter centre, where you can watch three sea otters and two European otters frolic in beautifully landscaped surroundings.

Conveniently situated in Montpellier’s lively Odysseum shopping centre, Planet Ocean is part-watery voyage, part-space odyssey! Children will love all the interactive elements, which include a clever simulation of a cargo ship battling stormy seas. After a tour of the fish tanks, enjoy some stargazing in the International Space Station-themed exhibition.

You’ll find Europe’s biggest freshwater aquarium here in Dordogne, where more than 6,000 fish swim in open-air pools at the Aquarium du Périgord Noir. For something a little different, VIP tickets can get you a fun fish-feeding experience. In 2014, to celebrate the centre’s 25th anniversary, an alligator park themed like a Louisianan swamp was opened where visitors can get up close and personal with some terrifying teeth.

Special guests at the Seaquarium are the cute and cuddly seals, who are bred on site. Visitors can also marvel at the adorable turtles and sea lions who call Gard home. A must-see for Jaws fans is the huge shark aquarium, where there are over 30 species of shark swimming in an enormous, two-storey-deep pool that is unique in Europe.

360,000 visitors a year flock to the Grand Aquarium Saint-Malo, making it Brittany’s second most-visited tourist attraction. There are around 11,000 animals here, with 600 species represented. Don’t miss the touch-pool, where you can starfish and sea spiders. Another intriguing experience on offer is the Nautibus ride, a trip for four people in a small submarine where you can gawp at 5,000 fishes.

For more travel inspiration, check out:

9 great things to do in Paris in the summer