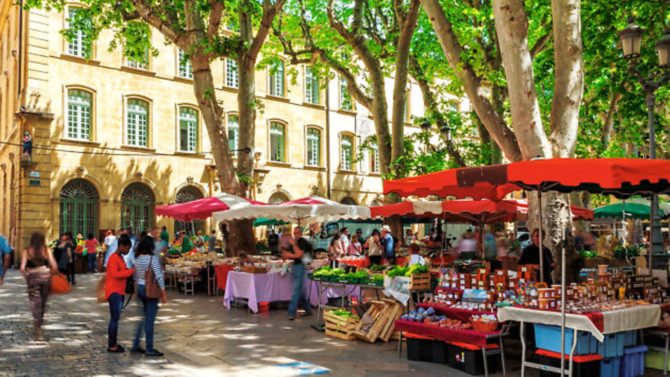 One of the best things about life in France is having a local market on your doorstep so you can buy fresh local produce. There are markets in almost every town but here are six of our favourites across France

On most days during the week, the vieille ville in Aix-en-Provence turns into a giant extended market where you can browse delicious regional produce in a beautiful historical setting. Shoppers head out into the morning air and browse the stalls on Place Richelme; filling their bags and baskets with delicious local wine, bread, and cheese as well as olive oil, fresh fruit, herbs, honey, garlic, vegetables, meat and fish.

When: Wednesdays and Saturdays

This square was originally the place where executions took place in the town but today, twice a week, it is packed with stalls laden with fresh local produce. The market spills out into Place du Coderc and Place de la Mairie, and in the summer, the many varieties of locally grown strawberries are a highlight. Also not to be missed are well-known Périgordian delicacies: duck and goose foie gras, confit de canard, walnuts and chestnuts.

In the Middle Ages, the ‘floating gardens’ around Amiens provided the townsfolk with fresh fruit and vegetables. Les hortillonages, as they are known, cover 300 hectares of reclaimed marshland along the banks of the Rivers Avre and Somme, which flow through the town. They are interlaced with 65km of small canals, known locally as ‘rieux’, and every Saturday, the hortillons who tend these fertile islands sell their produce in Place Parmentier on Quai Bélu, in the town’s Saint-Leu district. Once a year, on the third Saturday in June, is the Marché sur l’Eau. In celebration of their horticultural heritage, the hortillons dress in traditional costume, load up their barque à cornet boats with fruit, vegetables and flowers, and travel up the River Somme to Quai Bélu, just as they have done for centuries, to sell their harvest on the quay.

As France’s third largest fishing port, the sea’s rich harvest is central to the economic prosperity of Concarneau, and one way to glimpse what makes this pretty Breton town tick is to get up bright and early and head for the port to visit the daily commercial fish market, which starts at 6am. Fish and shellfish also feature strongly at the Monday and Friday markets, which take place on the large square opposite the entrance to the old town, which is known as the Ville Close. Other produce that is popular with shoppers includes bread, cheeses, fruit and vegetables, cut flowers and regional treats such as fish paste, crêpes and Breton cakes.

When: Tuesdays, Thursdays, Fridays and Saturdays

Les Halles, the 19th-century covered market hall, in Dijon was built by Gustave Eiffel. It stands 13m high and covers 4,400m², and with its magnificent vaulted roof supported by curved decorative ironwork, it is as much of an attraction as the nearby Palais des Ducs. Today, markets are held on Tuesday, Thursday and Friday mornings, and all day on Saturday, when stallholders lay out a staggering array of produce including foodstuffs for which Dijon is world renowned, such as the eponymous mustard, Kir, named after former mayor of Dijon canon Félix Kir, and pain d’épice.

One of the largest and oldest markets in France is held monthly in Les Hérolles. More than 400 years years old, it is held on the 29th of every month and takes over this small village almost entirely. As well as the cheeses, meats, fruit and vegetables you’d expect to find in any rural French market, live rabbits, sheep, goats, horses and cattle can also be found for sale as well as a wide range of poultry. Almost everything you can think of is for sale on a stall somewhere: honey, truffles, tractors, cottons and linens; plus lots of wine, bread and a mass of other local produce.