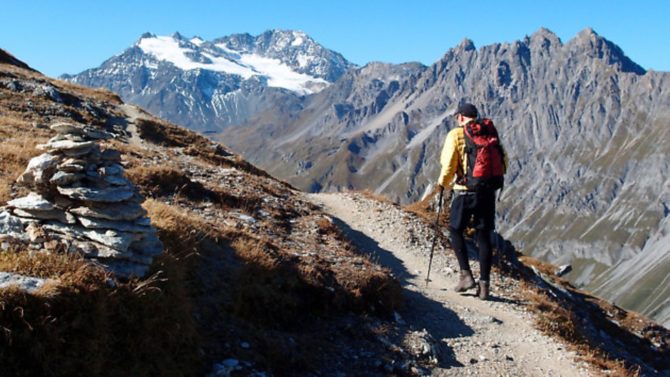 If you are a regular hiker, you’ll know France has an excellent choice of walking routes. Here is our pick of 6 challenging treks in some of France’s most breathtaking landscapes

The Vanoise National Park, the first to be created in France, is the jewel in the crown of Savoie. At its heart is a complex of glaciers that makes up the largest ice cap in Western Europe. They are as accessible as they are spectacular: in less than a week, it is possible to walk around the frozen plateau, close enough to feel the chilly breath of these mighty rivers of ice.

Over five or six days, you will walk for 60 kilometres with a height gain of 5,300 metres. The park has a superb network of mountain huts, many recently renovated with sundecks and picture windows, so days can be as long or short as you like. There are no technical difficulties, although plenty of options to climb additional peaks. Pristine lakes and deep valleys are linked by well-marked footpaths. Marmots, eagles, chamois and bouquetin – the ibex that the park was created, in part, to protect – will be regular companions.

While legs and lungs will certainly feel the rise in altitude, the satisfaction of effort and the thrill of the glacier-dominated scenery will ensure that this trek lives in both heart and mind, long after you have returned to the valley floor.

A day’s hike: From Pralognan-la-Vanoise, take the ski lift to follow the old mule trail – the Route du Sel – past Lac des Vaches to the Refuge du Col de la Vanoise, at the foot of the Grande Casse.

A walking holiday: Hire a mountain guide in Pralognan-la-Vanoise (tel: (Fr) 4 79 08 71 21) for walking up to, and even onto, the ice cap. Highpoint Holidays organises seven-night self-guided walks from mid-June to mid-September for £545pp (tel: 01747 858 229). In summer, simply pre-book the catered huts (www.refuges-vanoise.com) and follow the waymarks, keeping the glaciers on your left. In autumn and late spring, the huts are open for self-catering, reservations not required (check snow level). The route is described in Tour of the Vanoise, by Kev Reynolds (£12.95, tel: 01539 562 069).

The island of Corsica is loved for its blend of beaches and mountains. Its main claim to fame, among hikers at least, is a trail that combines both in abundance: the GR20. Known as the toughest of France’s grande randonnée routes, it covers nearly 200 kilometres with around 12,500 metres of ascent and descent, more than a mountaineer faces on Everest. “Walkers,” warns a French leaflet describing the trek, “must be like goats, in excellent physical condition.”

Incredibly beautiful, physically challenging and hugely popular, the GR20 is best avoided in high summer. It is also better to hike from south to north, allowing fitness to build on easier terrain: the trail is tougher at the northern end. Starting in Conca, the GR20 traces the island’s mountainous spine to Calenzana near Calvi. Highlights include the Breche de Capitellu, at 2,225 metres the highest point on the GR20; Spasimata Slabs with waterfalls like stallions’ tails and the black and yellow salamanders that frequent the path. The Cirque de la Solitude has always been a key challenge in the northern sector, but after a fatal accident in June 2015 it was closed. The route will reopen once it is safe again; check at www.parc-corse.org for updates.

Ideally, you need 15 days to walk the entire GR20, which is extremely well waymarked. Confident walkers on a week’s holiday should tackle the rocky northern leg from Vizzavona to Calenzana; casual hikers will love the southern sector with its shady paths and immense views, for instance over Lac de Bastani.

A day’s hike: Hike through woodland from Vizzavona to the Cascade des Anglais, a dazzling succession of waterfalls. Get refreshments from a tiny bar tucked behind a boulder.

A walking holiday: Many tour operators provide guided trips, including Walks Worldwide, Exodus and KE Adventure . In summer you can pre-book hut space or carry a tent. Visit http://corsica.forhikers.com for useful information.

Take the best that France has to offer – gourmet food, elegant wine, picturesque villages, spectacular views, heartfelt hospitality – and blend them into a week-long walk. Et voilà: perfection. Centred in the Vaucluse département, in the Côtes du Rhône wine area, this hike skirts the lunar bulk of Mont Ventoux.

It meanders from glorious Venasque – protected by cliffs and a trio of Saracen towers – via the wine-lovers’ playground of Gigondas, to the extraordinary Romanesque town of Vaison-la-Romaine with its arched bridge. Created by a Gigondas mountain guide for On Foot Holidays, the hike combines secret footpaths and ancient mule tracks with trails along limestone crests, in a linear route. Highlights, in addition to the exquisite food and accommodation along the way, include the rock-lace needles of the Dentelles de Montmirail, the honeystone castle of Crillon-le-Brave and Le Barroux’s hilltop château.

Walking days range from four to seven hours, but the terrain is varied and the lure of a nightly feast provides ample incentive. The fact that your hosts are transferring your luggage simply adds to the enjoyment: it means you have space in your daypack for a bottle or two of the wine you may have sampled.

A day’s hike: Explore the spectacular limestone needles of the Dentelles de Montmirail on a circular hike from Gigondas. Allow all day and prepare to be amazed.

The sun-baked mountains of the Alpes-Maritimes département hide the mysterious Vallée des Merveilles (Valley of Marvels), discovered by an English botanist, the Rev Clarence Bicknell, in 1881. The high-lying rocky valley – buried in snow for half the year – is a prehistoric art gallery guarding 40,000 enigmatic rock carvings: animals, warriors and arcane ancient gods.

It is most thrillingly approached on a three-day round walk from the pretty hamlet of Castérino, close to the Italian border. The waterfall-filled hairpins of the Valmasque Valley lead you to the eponymous refuge, perched on a crag above Lac Vert.Here you spend your first night in the ruggedly beautiful Mercantour National Park – France’s last real wilderness. You’ll see chamois and marmots, and perhaps hear wolves. Next morning’s climb skirts the nearby Lac Noir and the azure Lac du Basto on the way to the Baisse de Valmasque, the rocky Sorcerer’s Pass at 2,542 metres. This is some of Europe’s most dramatic scenery. From here the Valley of Marvels descends the canyon clinging to Mont Bégo, the sacred mountain of Liguria.

The track is precipitous, cliffs rearing on each side. Bicknell called it “the ladder to Heaven”. Soon you’ll see engravings. A way-marked archaeological trail lies lower down, but it is preferable to take a guided tour from the Refuge des Merveilles to marvels that you would never find by yourself. After a rib-sticking dinner at the refuge on Lac Long’s shore, to see the valley lit by millions of stars is a haunting experience.

A day’s hike: The direct walk to the Vallée des Merveilles takes around four hours. Allow another three for guided tours of the archaeological zone (www.vallee-merveilles.com). For less hardy walkers 4×4 trips to the Refuge des Merveilles cost €85 per person. It takes around two hours to walk back.

The Gorges du Verdon lies mostly on the border of the Var and Alpes-de-Haute-Provence départements and wasn’t explored until 1905. The trek along its riverbed, the Sentier Martel, is named in honour of the potholer who first braved its depths and belongs among the planet’s most sensational walks. It’s also an adventure, with tunnels to traverse and iron ladders to scale; yet in five to seven hours the path can be tackled by anyone who is reasonably fit.

From the Point Sublime near the village of Rougon it’s mostly downhill. Very soon you need torches for the 700-metre-long Tunnel Le Baou and the 100-metre-long Tunnel de Trescaïre. Both were excavated in a scheme to turn the gorge into a huge reservoir luckily abandoned when World War I broke out. At the bottom of the gorge – 700 metres deep – you have reached a different world. Take a picnic and bathing gear. You’ll find idyllic river beaches and limpid pools.

After climbing six ladders at the Brèche Imbert spur and enjoying the fantastic views, it’s downhill again until the 400-metre, hour-long slog up to the Chalet de la Maline. For the gorge’s grand finale make for the Hôtel du Grand Canyon (tel: (Fr) 4 94 76 91 31, www.hotel-canyon-verdon.com) perched on the lip of the Falaise des Cavaliers. Be bewitched by the breathtaking aerial views of the abyss at sunset and glow with pleasure over dinner because you’ve really been down there.

The Pyrénées, I was once told by an experienced mountain guide, are exactly eight- and-a-half times more beautiful than the Alps. I see what he means. On my first week-long trek between mountain villages I fell in love with these peaks, spotting izards (Pyrenean chamois), marmots and vultures, enjoying the spectacle of transhumance herds heading for high summer pastures, munching brebis cheese and garbure (traditional ham and cabbage stew), and marvelling at the glorious scenery.

The mountains that form the French-Spanish border are laced with footpaths offering countless options for walks. Hardcore end-to-enders tackle the Haute Randonnée Pyrénéenne. But in truth, the lower-level (though still challenging) GR10 is even more delightful. The path snakes some 900 kilometres from Hendaye on the Atlantic coast to Banyuls on the Mediterranean, its red-and-white waymarks punctuating the Basque Country, the Pyrénées National Park and southern Roussillon.

Tackling the whole route takes around seven weeks, but you can experience some of the most magnificent patches in just seven days. My advice is to trace the 140-kilometre stretch between Lescun and the Cirque de Gavarnie, choosing the high variant south from Cauterets. You’ll stay in ancient stone villages; walk the incredible Chemin de la Mâture, an 18th-century path etched into a vertical cliff-face; hike in the shadows of the beautiful Pic du Midi d’Ossau and mighty Vignemale (at 3,298 metres, the highest peak in the French Pyrénées); and gawp at the Cirque de Gavarnie, the massive glacier-carved amphitheatre dubbed by Victor Hugo ‘Nature’s Colosseum’.

A day’s hike: It’s possible to enjoy a day’s walk in the cirque in summer, when three buses a day run to the village of Gavarnie from Luz-Saint-Sauveur. Arguably the best route follows the west bank of the stream up to the Hôtellerie du Cirque and on to the Grande Cascade waterfall, then around the flank of the cirque to the Refuge des Espuguettes and back down to Gavarnie – around five hours. Find a route guide (in French) at www.tourism-midi-pyrenees.co.uk