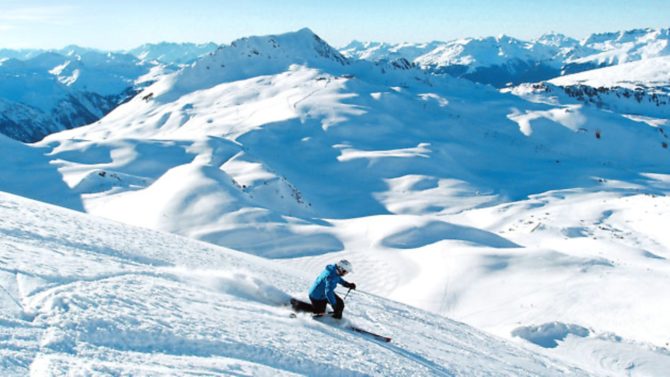 Love skiing in the French Alps but hate the crowded slopes? Discover 4 hidden Alpine resorts in France, easily accessible by ski lift, where you can ski off-piste and get away from the crowds

When the Les Arcs pistes are packed, Col de la Chal is a much-loved escape route. The scenery, rollercoaster slopes, Alpine village and secret picnic bench combine to make it a journey, not just a run.

From the top of the Transarc lift, slide to the right of La Crèche restaurant. The pyramid of Aiguille Grive is on the right; simply ski straight ahead towards the horizon, before bearing right down the valley. There are many choices; some skiers stay high on the right for a long traverse, others slide far left before swooping right. Our favourite line gives the most skiing: by staying slightly right of centre in the huge bowl, we often find untracked snow.

Halfway down, a shallow slope leads to Chalets des Rossets, a hamlet used for summer ‘alpage’, when farmers bring cattle and sheep to the meadows. If conditions are good it’s possible to drop south from here, steeply through the forest. Normally, it’s safer to bear right and cross the stream beside the chalets, on to a track below Aiguille Grive. Just as the track starts to descend, there’s a bench on the right, often buried under snow. It makes a dream spot for lunch, with views straight on to the mighty Bellecôte north face (also skiable) and left to the Toblerone chunk of Aliet.

The track now carves switchbacks to the valley floor and holds snow until the end of the season; it’s easy sliding with plenty of views and, often, sightings of eagles. Midway, there’s an opening in the trees to reveal the baroque chapel of Notre-Dame des Vernettes. The chapel is the site of the ‘holy spring of repeated miracles’ and is also famed for its painted murals. At the track’s end, is a bus stop: a free shuttle runs twice an hour to the Lonzagne lift at Peisey, lifting skiers back into Les Arcs.

Sainte-Foy-Tarentaise is a small resort, with a handful of lifts serving a new village built in wood and stone. The off-piste can be glorious; the biggest runs are off steep north faces but they involve a fair degree of effort, climbing on foot with skis on your shoulders or rucksack. The best lift-served route is the lovely descent to Le Monal; it’s ideal for off-piste beginners and great fun for powder hounds wanting a short, sharp burst.

Lift passes here are the cheapest in the valley (adult €30/day); this tour is also short enough that we can ski it off the top lift, then return to the slopes for more skiing.

From the top lift we bear briefly left, then drop to the right on whatever line takes our fancy into the wide, open bowl. In summer there is a lake down here, but it’s well covered in winter. Passing a clutch of stone buildings, we turn right around a buttress and cross the river, before a very short climb up the far bank, carrying our skis. Then, keeping the river on our right, we work down the slope through trees to the hamlet of Le Monal. It’s chocolate-box pretty, with stone buildings and a whitewashed chapel.

With a lake, streams and fantastic views of Mont Pourri, the glaciated giant of the Tarentaise at 3,779 metres, just across the valley, it’s a wonderful place to stop for a breather or lunch. Afterwards, we follow the stream around the mountain, squeezing between houses at L’Échaillon and eventually on to a blue (moderate) piste, which returns to Sainte-Foy. If we’re pushing on, the entire route can be ticked off in under two hours, but it’s more fun to take our time and enjoy the views. After all, that’s what ski touring is all about.

Combining a short climb on foot, an exciting descent to a glacier, open slopes into a wild valley, a mountain hut, a magnificent waterfall and a cosy restaurant at journey’s end, this huge run is one of the top-rated off-piste adventures in the Tarentaise. The south-facing Cul du Nant is a popular descent with guided parties and individuals. It’s also one of the toughest in the area, so you need to be an experienced skier with a head for heights. The first challenge is climbing to the ridge: this is steep and skis are best carried on a rucksack, not your shoulders, as you usually need both hands free for balance.

From the ridge, there is a choice of routes down to the glacier; your line depends on the season and snow conditions. Safely on the glacier, the fun starts. The idea is to drop into the vast Vallaisonnay valley, bearing generally to the right; we always watch the cliffs for avalanches, which are the main objective danger. After about a 1,200-metre drop, the Refuge de Plaisance comes into view. Two A-frame huts house a dormitory and a kitchen area; the sunny terrace is a lovely place for a break. I once dozed off here, and the sun was so hot it melted my boot liners.

Following the stream, we arrive at a rocky lip where a waterfall plummets more than 50 metres to the River Doron. Skiing the slopes to the left gives a descent to the cross-country ski track of Champagny-le-Haut. This track mirrors the river for 3.5 kilometres to le Bois; it’s a tranquil slide, and we entertain ourselves by looking for ibex, chamois, vultures and pair of royal eagles that live here.

From le Bois, the lifts of Champagny-en-Vanoise (linked into the La Plagne ski area) are five kilometres away, reached by Taxi Dunand; we always call them from a mobile once we’ve reached the ridge, and allow 2.5 hours for the descent, with stops.

Bonneval-sur-Arc is a precious jewel in the Alpine crown. One of France’s Plus Beaux Villages, it combines a traditional atmosphere – cobbled alleys, no overhead wires and a strict policy on wood-and-stone architecture – with a small but perfectly formed ski resort. At the head of the Haute Maurienne Valley, on the eastern edge of the Vanoise National Park, it is bounded by glaciated peaks and almost touches the Italian border. It offer a good snow record, enviable terrain and terrific value, with an adult day pass costing just €28.

Bonneval is rightly famed for its off-piste which, courtesy of the complex network of cliffs, glaciers and steep valleys, is best explored with a guide. Through ESF, I skied with Gabriel Blanc, ski instructor, farmer and mayor of Bonneval. Threading our way through the lift system to nearly 3,000 metres, we slide north (skier’s right) around the toe of the Glacier Superior du Vallonnet, part of an ice-field surrounding L’Albaron, the area’s loftiest summit at 3,637 metres.

A delicate route through a series of cliffs and bowls leads to a wide, moderate-angle couloir: as it’s north-facing, it has the best possible chance of holding powder. Bearing right under a rock buttress, the next drop is on to the Glacier Inférieur de Vallonnet, the ice-cap’s northern finger. Crevassed at the top, it’s clean and clear near the bottom and provides a glorious swoop direct to the Chardonneret piste. Throughout this run, panoramic views unfold: from the Albaron glacier bordering Italy, toward the peaks above Val d’Isère, across the Vanoise and down to the network of bijou ski resorts that line this remote valley. With off-piste possibilities in every direction, it offers plenty of incentive to keep coming back: personally, I’ve marked Bonneval-sur-Arc as a favourite.

Skiing off-piste is a potentially dangerous sport. All skiers should wear avalanche transceivers, carry an avalanche probe and shovel, and know how to use them. This also applies to guided groups: guides are not infallible and many of the deaths in avalanches occur in guided groups.

Looking for other places to ski in France?

Previous Article 5 pet-friendly hotels in France
Next Article French property dream: a ‘half château’ in Tarn