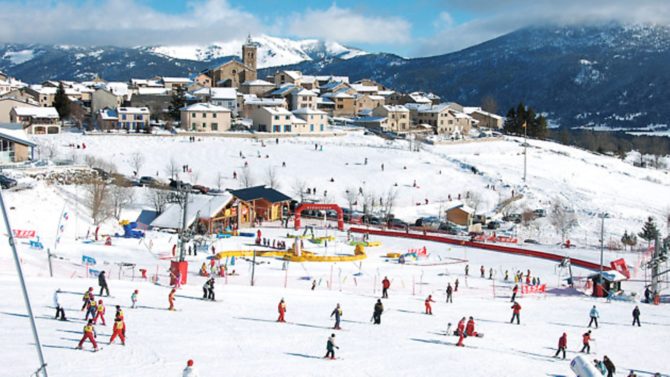 Looking for an alternative to the busy and expensive ski resorts in the Alps? Try the Pyrénées, with good ski runs, plenty of character and thermal spas to soothe the day’s aches

Plateau de Bonascre, basking in the mid-morning sun, lies at the heart of Ax-3-Domaines and is the access point to 80 kilometres of pistes spread over three distinct ski areas.

Skis now on, I make a short slide over to the Lièvre Blanc six-seat chairlift. This modern apparatus would confound the prejudice among Alpine skiers that the lifts in the Pyrénées are old and slow. Indeed, there is hardly any time to take in the panorama now opening up. Across to my left is the fine snowy ridge dominated by the Dent d’Orlu and beyond that the Pic Carlit and just maybe a glimpse of the Pic du Canigou, a mountain that is considered almost sacred to the Catalans inhabiting the lands on each side of the border with Spain.

My guide Jacques leads me via a short, easy green piste to another chairlift and I am once again seated for the final climb to the Tute de l’Ours at 2,255 metres. At the top I am in a world of total snow and, without pausing, Jacques shoots off down Savis, a long, slightly harder, blue run that he assures me I will enjoy. This is the Campels ski area; with its wide-open slopes facing south and east, it is where to start your day.

On the long lift to the top of the resort at almost 2,400 metres, Jacques explains that Ax-3-Domaines is different from many resorts in that the beginners’ area is above 2,000 metres, so even novices are almost guaranteed snow.

Jacques recommends Bonascre, another of those long, straightforward blue runs that seem to characterise the resort. It makes up the third of the domaines and is understandably popular as it heads down through the pine trees. For Jacques this is what makes Ax special. Skiing through the trees and unable to see the other pistes, you have no sense of sharing the resort with anyone else. Indeed as this is a Monday in January, Jacques estimates that there are fewer than 1,500 skiers in the entire resort, compared with more than 8,000 at the weekend.

In one crucial respect, however, Ax is typical of Pyrenean ski resorts and that is in the range of activities away from the ski slopes. Almost every Pyrenean ski resort has a thermal spa within striking distance, and in Ax, the Bains du Couloubret are right in the centre close to the cable car station. Only minutes after touching down, I am soothing my aching muscles in a grand Roman-style swimming pool thermally heated to a comfortable 38°C. Moving to the outdoor pool I lie back and admire the views of the mountains that bear down on the town.

After a couple of days in Ax, I drive up the Val d’Ariège towards the principality of Andorra and rather than go through the tunnel I opt for the more daring option over the Col de Puymorens (1,920 metres), which is open to vehicles.

On the south side of the col, things really start to change, although I am still in France (apart from a brief moment when I accidentally pass through the Spanish enclave of Llivia). The village names suggest a Catalan influence and the region’s distinctive red and yellow flag is a frequent presence.

The long, looping and slow-rising road leads to Font-Romeu, a high-altitude resort that began in the 1920s as a fashionable climatic spa famed for its cool, dry air. In Font-Romeu everything faces south and despite sitting between 1,300 metres and 2,200 metres, the resort area always seems warm. Indeed on the way up I encounter the array of giant mirrors of a solar furnace that concentrates the sun’s rays into an experimental oven that can produce temperatures in excess of 3,500°C.

At the hotel Le Grand Tetras I meet my guide François and we continue the drive up through the well-spaced pine forest on a road that is often pounded by Olympic athletes Mo Farah and Paula Radcliffe, who spend part of the year at the specialist high-altitude training centre.

The ski resort, which lies at the top of the road at 2,000 metres, is not about sporting performance. “The philosophy is more about relaxation and cultural identity,” says François. “We have storytellers, treasure hunts and orienteering for the children, which takes them into the woods. It is more than just skiing here and people also spend their day swimming, dog sledding, snowshoeing and cross-country skiing.”

When we hit the slopes I have no problem adopting the philosophy. On the south-facing side it is like skiing on a beach, it feels so warm. It hasn’t snowed for 18 days, but the slopes are in good shape thanks to 300 snow cannons that work well in the dry atmosphere. The steepest slopes are on the north side and the red and black runs that plunge down into the chilly shade are also on the gentle side and flatter my skiing abilities.

As is becoming my custom, I end the day with a visit to a thermal spa. The Bains de Llo lie a short distance away at the bottom of the rocky Gorges du Sègre. Again it is a mix of indoor pools, where underwater music helps the relaxation process, and outdoor pools fringed with snow. The water is hotter than I have experienced elsewhere in the Pyrénées and it is with great reluctance that I leave the pools for the bitterly cold but short walk back inside.

Les Angles, my final resort, lies just a few kilometres north of Font-Romeu, and a heavy snowfall is forecast as I set off. When I get up the next morning, the resort is encased in a layer of deep, soft snow.

Where Font-Romeu is warm and relaxed, Les Angles at 1,650 metres is much colder and sportier. Indeed, it is so cold that it is often referred to as Petite-Sibérie. None of the 53 kilometres of pistes is in the sun all day and many face north. The upside is that the well-groomed pistes remain in perfect condition and the pines shrouding the slopes retain their thick layer of snow.

The custom in Les Angles is to start at the Pla del Mir, where there is never any wind, and work your way round the dome-shaped ski-mountain in an anti-clockwise direction, taking each run in turn. This gives me a varied day of easy greens and blues up to seven kilometres long in the Pla del Mir and Bigorre sectors to challenging reds in the Secteur Balcère. Inevitably, I arrive at the top of the infamous Mermet Mur, a black run that takes a vertiginous route back in to the town centre.

Emboldened by my success in Font-Romeu, I get off to a good start, but halfway down it is clear that I have bitten off more than I can chew, so I have to adopt a conspicuous and undignified sliding technique to get me to the bottom. From here I have a good view of the old village, which sits apart on a knoll beyond the ski hire shops and restaurants. The village stands out against the snowy slopes of the Pic du Canigou in the distance and to my eye is indisputably untypical of the Pyrénées.

The loosely packed houses are square and the roofs have the low-slung look of southern Europe; the iron campanile holding the exposed bell on the church tower confirms its Mediterranean credentials. The village, at least, catches the sun all day.

And discover why France is so magical in winter

Previous Article January 2016 issue of FRANCE Magazine on sale now!
Next Article Eating out in Charente-Maritime