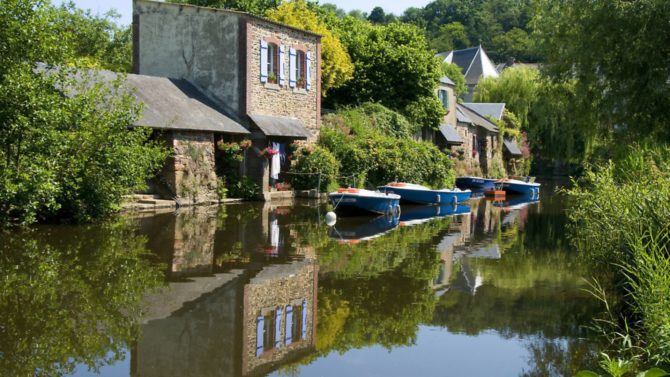 Locronan is one of Brittany’s plus beaux villages and a Petit Cité de Caractère. It was a rich merchant village in the middle ages, supplying sails to the French navy and the East India Company, and this wealth is evident in the grand houses found throughout the village. The fact that Locronan has remained largely unchanged since the 18th-century means it is a popular location for period films – for example, A Very Long Engagement starring Audrey Tautou. Chocolate-box shops, thatched roof cottages and granite stone buildings line the village and the 15th-century Église St-Ronan is a must-visit.

Another of Brittany’s plus beaux villages is Moncontour, a medieval walled town perched on a hill not far from Saint-Brieuc. Moncontour was once the centre of Brittany’s linen production and there are a number of grand houses built with this wealth. There is an impressive church, central marketplace and traditional granite houses decorated with flowers to explore.

Saint-Suliac is another of Brittany’s plus beaux villages and it’s easy to see why! This charming fishing port sits on the banks of the Rance estuary between Saint-Malo and Dinan. Its pretty granite houses are usually covered with flowers and there is a 12th-century church to explore. You might also stumble upon a tide mill or a standing stone. Once you have finished exploring the village head up to the Virgin of Grainfollet statue to enjoy panoramic views over the village and estuary.

Winner of the title of ‘France’s favourite village’ in 2016 and another plus beaux village, Rochefort-en-Terre is a must-visit. Rochefort-en-Terre has wealthy painter Alfred Klotz to thank for much of its appeal – he bought the local château 1907 and encouraged local residents to dress their houses with geraniums, a practice that continues today. The attractive houses are a mixture of styles from half-timbered houses to stone-built Renaissance buildings and many of them are home to artisan shops.

Located on the Pink Granite Coast, one of the most beautiful stretches of coastline in Brittany, Ploumanac’h is home to unusual rock formations the area is famous for. The village was voted ‘France’s favourite village’ in 2015 and is located near the popular seaside resort of Perros-Guirec. This stretch of coast is known for its unusual rock formations and you can find ‘Napoleon’s hat’, a ‘witch’ and a ‘rabbit’ near Ploumanac’h.

Found on the island of Belle-Île, Sauzon is a pretty port with colourful houses lining the harbour. The right bank of the estuary is protected from construction meaning the pretty village will remain a favourite with photographer and painters. After a stroll along the harbour head into the village centre and explore the artisan shops and stop for lunch at one of the restaurants.

Dubbed the ‘Hay-on-Wye of Brittany’, Bécherel is a must-visit for book-lovers. Bécherel officially became a book town in 1989 and with 15 bookshops, a monthly open-air book market and a popular Fête du Livre every year, it is easy to see why. The village itself is picture-perfect with quiet, quaint streets lined with granite stone buildings which are brightened by colourful doors painted in pillar box red, sky blue and baby pink.

Ménéham is an incredible little village found among giant boulders on the Finistère coast. Recently restored and turned into a showcase village, Ménéham is unlike any other village, especially the 17th-century coastguard’s cottage encased between two huge rocks. Clamber on top of the boulders to marvel at the far-reaching coastal views and watch films projected in parts of the village to learn the history of the people who lived in this extraordinary village.

5 reasons why Brittany is so desirable for British buyers

The pretty village of Le Faou is found at the north-western corner of the Crozon peninsula and sits on a natural harbour where the Faou river meets the sea. Take stroll along the harbour, now busy with pleasure boats rather than boats piled high with timber from the nearby forest, and visit the 16th-century church of Saint Sauveur with its ornately carved baptismal font.

Sitting on the banks of the River Trieux, Pontrieux is another village that was wealthy during the middle ages thanks to the linen trade. Take a boat trip along the river to admire the restored private wash houses and attractive flower displays and then visit the Moulin de Richel, grand Hotel de Keruzec and the surprising Maison de la Tour.

The village of Mont-Dol sits on the hill of Mont-Dol meaning it boasts panoramic views of the countryside and Mont-Saint-Michel. Its pretty streets are lined with granite houses and blue shutters and there is an interesting church with ancient frescos.

Discover the stunning secret villages of the south of France

Situated on a rocky promontory at the foot of the Jaudy estuary, just 10km from the English Channel, La Roche-Derrien has been labelled a Petite Cité de Caractère. The village is in a strategic location and a castle was built on the site in the Middle Ages to prevent an invasion. The village was also the site of a battle in 1347 during the Breton war of succession. Take a stroll along the river and explore the traditional granite houses in the village.

The pretty village of Plouezoc’h sits on the Finistère coast, just north of Morlaix. The village itself has a few streets of pretty houses and an attractive 17th-century church but most people visit to explore the nearby Cairn de Barnenez, the largest and one of the oldest methalitic burial sites in Europe thought to be 6,500 years old.

The cobbled streets and traditional granite houses have ensured that Pont-Croix is a favourite with artists and photographers. The tall spire of the Notre-Dame de Roscudon dominates the skyline and the 13th-century church is worth a visit, as are the pretty gardens and market place.

Saint-Briac-sur-Mer is another of Brittany’s traditional fishing ports that has developed into a charming seaside resort. There are no fewer than nine beaches to enjoy and plenty of coastal paths along the Emerald Coast to explore. The village has a 17th-century bell tower and picturesque streets that have inspired artists including Renoir and Signac.

The town of Josselin sits on the Nantes-Brest canal and is a favourite stopping off point for those cruising the canal. The town is dominated by its château which is open to the public from April-October. The town itself is home to medieval half-timbered houses, the gothic Basilica Notre-Dame du Roncier and a lively Saturday street market. Climb to the top of the bell tower of the basilica for panoramic views over the town and surrounding area.