15 charming villages in Normandy you should explore 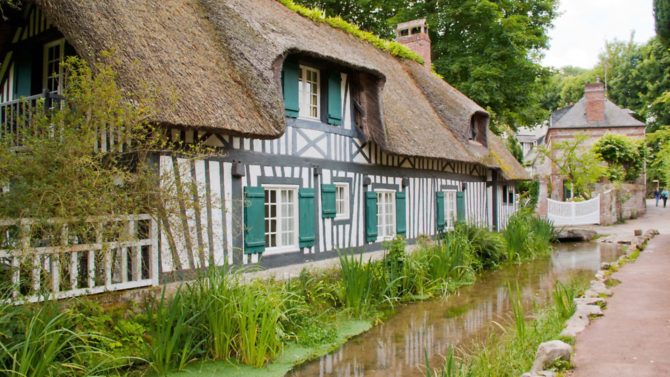 From picturesque coastal villages to charming countryside villages with traditional half-timbered houses, Normandy has plenty of pretty villages to explore. These are 15 of our favourites

In the heart of the Pays d’Auge is the beautiful village of Beauvron-en-Auge, the only Plus Beau Village in Calvados. A great example of a typical Norman village, Beauvron-en-Auge is home to colourful 17th and 18th-century half-timbered houses. The village is a popular stop on the Route de Cidre, a 40-km trail that allows you to meet cider producers and learn about cider making traditions. If you are interested in cider then the Fête du Cidre takes place in Beauvron in November or if you like antiques then visit on the second Sunday of the month for the antiques fair.

Barfleur on the Cotentin Peninsula is a great example of a traditional Norman fishing port and is listed as one of France’s Plus Beaux Villages. Sturdy granite houses and seafood restaurants are gathered around the harbour and the village has an unusual church with a square tower rather than a spire. The imposing Gatteville lighthouse, first lit in 1775 sits at the tip of Barfleur. Make sure you try the moules de Barfleur, harvested from the natural mussel banks by boat – cooked à la marinière or à la normande they are delicious!

Normandy: an insider’s guide to the region

Saint-Céneri-le-Gérei is nestled in a loop of the River Sarthe in Orne, with a small bridge connecting one half of the village to the other. On both sides of the river you will find picturesque cottages and there is a lovely 15th-century chapel and 11th-century church to explore. Legend has it that the village dates from the 7th century when Italian Céneri settled here and built a monastery after a water spring miraculously appeared in front of him. Nowadays the village is famous for the artists it attracted during the 19th century, including Corot and Courbet, and you can visit the inn where they stayed, the Auberge des Soeurs Moisy, which is now an art museum.

Le Bec-Hellouin in Eure is famous for its abbey, the Abbaye Notre-Dame du Bec. Founded in 1034, the abbey quickly became a major Christian centre thanks to two of its abbots, Lanfranc of Pavia and Anselm of Aosta who both went on thebecome Archbishops of Canterbury. Le Bec-Hellouin is a typical Norman village with timber-framed houses and flower-decked balconies, surrounded by verdant countryside – no wonder it’s one of France’s Plus Beaux Villages.

Set in the heart of a 10,700-hectare beech forest just 40km from Rouen, the Plus Beau Village of Lyons-la-Forêt looks like the setting for a fairy-tale. The forest has protected the village from intruders and limited its growth ensuring it remains unspoilt. Lyons-la-Forêt is full of traditional half-timbered houses and a picturesque church, but the heart of the village is an 18th-century covered market which hosts concerts, craft fairs and other social activities.

Explore the village of Lyons-la-Forêt

You get the best of both worlds in Veules-les-Roses, a quaint village along the Alabaster Coast that offers the best of the coast and countryside. Veules-les-Roses was originally a fishing village and then a fashionable holiday destination in the 19th century that attracted numerous artists. Following the River Veules (the shortest river in France at just 1.3km) the village boasts thatched cottages and watermills.

The pretty village of Bellême in Orne was a contender for ‘France’s favourite village’ in 2017 and it’s easy to see why. The historic capital of Le Perche naturel regional park, Bellême boasts a number of beautiful 17th-19th-century houses. Part of the original ramparts of the village remain, including an original arched gateway leading on to the main square.

On the edge of a forest not far from the village of Bellême, La Perrière is a picturesque village with less than 300 inhabitants. The village is famous for its net lace embroidery, known as artistic net, which was bought by the great Paris fashion houses of the late 19th and early 20th centuries. Wander along the streets of La Perrière and you will find colourful stone houses decked with flowers and if you visit at Pentecost then you can enjoy the annual contemporary art market.

Anyone with an interest in art will have heard of Giverny in Eure because of its most famous resident, Claude Monet. Giverny was home to Monet for more than 40 years and his house and gardens are instantly recognisable from his paintings and a popular tourist attraction. The village is situated on the banks of the Seine and boasts far-reaching countryside views and pretty houses and, unsurprisingly, a number of art galleries and boutiques.

Les Andelys is made up of two villages, Petit-Andely and Grand-Andely, and is dominated by the imposing Château-Gaillard. Built on the cliffs by Richard the Lionheart to keep watch over the valley, the château in now in ruins but is worth the climb for the superb view. On the banks of the River Seine below the château, the village is very picturesque with a pretty church.

The quaint village of Varengeville-sur-Mer is just a few kilometres from Dieppe along the Alabaster Coast. Full of charm the village boasts numerous pretty houses and blooming gardens and, perched on the edge of the cliff is the small church of Saint-Valery and its graveyard. The view is breathtaking and was a favourite of artist Georges Braque who had a house built in the village.

The French villages you should visit this year

Probably one of the most famous sights in Normandy are the dramatic cliffs at Étretat which inspired a number of Impressionist artists including Monet, Boudin and Courbet. Étretat itself is a charming seaside resort (probably more of a town than a village) that became popular in the 19th century. The town has a mixture of medieval half-timbered houses, fisherman’s cottages and grand belle époque houses, and a lovely covered market. Don’t forget to take a walk along the cliff tops!

The village of Clécy is found in the area of France known as Suisse Normandie, a stretch of the Orne Valley where the river has carved out dramatic gorges into the rock. The village is on a slope with interesting houses and stone and slate buildings and is dominated but an outcrop known as the Pain de Sucre (Sugarloaf) and the towering viaduct. Canoeing and kayaking are popular activities on the river below the village.

The peaceful village of Blangy-le-Château is nestled in the Calvados countryside. There is a small square with fountain and a handful of shops, bar and restaurants as well as a number of colourful half-timbered houses, the oldest of which dates back to the 16th century. There is the remains of a medieval castle, a 16th-century church and 19th-century lavoir to explore.

Built along a former Roman road on the banks of the River Calonne is the village of Cormeilles in Eure. The streets are lined with half-timbered houses and there are a number of antiques shops to wander around. The largest calvados distillery is found in Cormielles and you can visit it to find out how calvados is made.

Previous Article Winter has arrived in France
Next Article WIN! A copy of the book Savages: The Wedding