Celebrate 100 years of the Laughing Cow in Jura 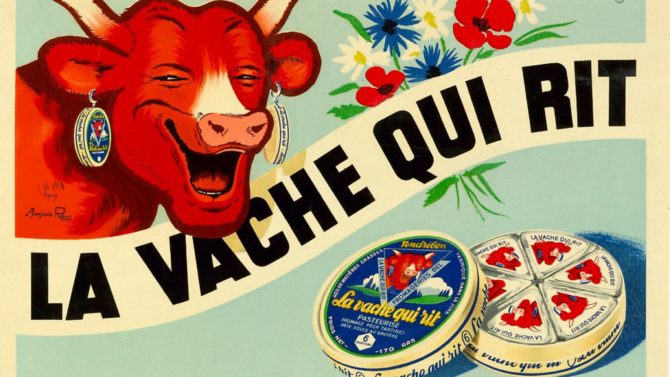 La Vache Qui Rit, or the Laughing Cow, celebrates its 100th anniversary in 2021. Created by a Jura-based cheese maker in 1921, the iconic French fromage is now the fourth biggest cheese brand in the world and is sold in more than 130 countries, with 121 triangular portions produced every second.

La Vache Qui Rit was produced by cheese manufacturer Établissements Jules Bel, from an idea that came from Jules’ youngest son Léon, a Comté producer, who had been inspired by a Swiss fondue cheese. La Vache Qui Rit was originally sold in a round metal tin that featured an image of a white cow on a red background behind a black gate bearing the words ‘La Vache Qui Rit’. In 1924 Léon Bel decided to change the brand’s logo and asked illustrator Benjamin Rabier to design the famous red laughing cow. Bel’s inspiration came from a smiling cartoon cow called Wachkyrie that Rabier had produced during World War I.

To mark the brand’s centenary, La Maison de la Vache Qui Rit, a colourful museum dedicated to the famous cheese, will host a special exhibition this year entitled ‘100 Rires’ to share smiles and stories from the brand’s 100-year-history. Opened in 2019 in Lons-le-Saunier, capital of the Jura department and birthplace of the Laughing Cow, the museum stands on the site of the brand’s first workshop and was the result of a project driven by Léon Bel’s granddaughter Catherine Sauvin.

The celebrations also include a two-day cycling event, the ‘Cyclosportive’, which will take place from 22-23 May 2021. Starting in Lons-le-Saunier, the race incorporates three different routes of varying lengths for all ages and abilities, whether you’re a beginner or fancy yourself as the next Bradley Wiggins. All entrants will receive a special anniversary jersey and be entered into a raffle to win major prizes, while a lively exhibitors’ village will showcase local producers, craftspeople and businesses.

A third celebratory event, a fête foraine, has been organised for 11-12 September 2021 and will see the creation of a mini amusement park in Lons-le-Saunier’s Parc des Bains. Expect plenty of games, a mini funfair and a light show, not to mention giant snacks in the brand’s signature colours. With the ambience of a traditional village fête, it will also promote the importance of ecological awareness to reflect the brand’s commitment to environmentally friendly working practices.