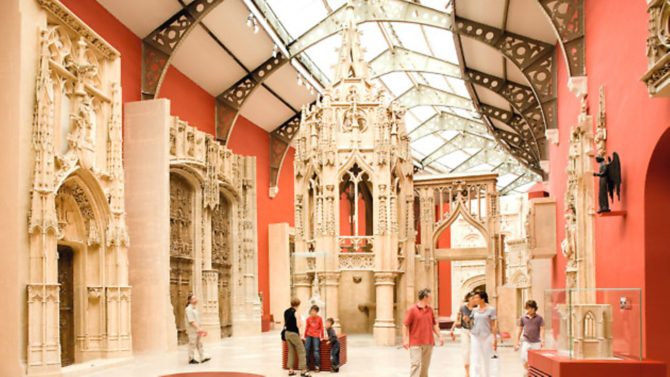 Want to go to Paris’ excellent museums but don’t want to spend too much on tickets? Here are 10 museums in Paris that are free on the first Sunday of the month

It’s worth planning your next trip to Paris to happen on the first weekend of every month because national and municipal museums offer free entrances on the first Sunday of every month to their permanent collections. This sadly does not apply to the Louvre, to the Chateau de Versailles or to private museums and institutions. But there’s still plenty to satisfy your thirst for French art and culture while saving those euros for other important things. Like wine, for example.

Get off the metro at: Metro Trocadéro / Champ de Mars – Tour Eiffel

Paris’ museum of modern art is fascinating both on the inside and the outside. With a large tube escalator running across a pipe-covered façade, the futuristic-looking glass building houses Europe’s leading collection of modern and contemporary art.

Get off the metro at: Metro Hôtel de Ville / Châtelet – Les Halles

Founded in 1794 by Henri Grégoire and refurbished in 2000, the Conservatoire National des Arts et Métiers is a museum of technological innovation and exhibits over 2,400 inventions. The collections are divided into sections: Scientific instruments, Materials, Energy, Mechanics, Construction, Communication and Transport.

Get off the metro at: Metro Arts et Métier

Set in Eugène Delacroix’ former apartment and studio, this museum houses paintings of nearly every of Delacroix’ phases but also unique sketches on paper, objects he brought back from Morocco, letters to or from the artist and objects he had bequeathed to friends such as his easel and palettes.

Get off the metro at: Metro Saint-Germain-des-Prés / Saint-Michel – Notre-Dame

Located in the heart of the Quartier Latin, this museum houses an important collection of tapestries, sculptures and paintings dating back to the Middle Ages. The museum is set in a stunning 19th century hotel particulier and in the grounds are some beautifully preserved roman baths dating back to the 1st and 2nd century.

Get off the metro at: Metro Cluny – La Sorbonne / Saint-Michel – Notre-Dame

Built in 1852 to shelter the Tuileries gardens’ orange trees during the winter, it began housing the works of contemporary artists in the early 20th century. One of the most famous exhibits is Claude Monet’s Nymphéas, 8 huge 2-metre high paintings depicting the artist’s famous lily ponds.

Get off the metro at: Metro Concorde

The museum was installed in the former Orsay railway station that was built for the 1900 Universal Exhibition. It opened in 1986 and exhibits paintings and sculptures created between 1848 and 1914. It is mostly famous for the remarkable impressionist and post impressionist galleries located on the upper floor.

Get off the metro at: Metro Solférino / Musée d’Orsay

Located in the beautiful Hotel Salé in the 3rd arrondissement, this museum’s collection has more than 5000 of Picasso’s works making it the only collection in the world to give an overview of the artist’s work in all art forms: painting, sculpture, engraving and drawing.

Get off the metro at: Metro Saint-Paul / Châtelet – Les Halles

Rethought entirely in 2014, the circuit of this museum’s permanent collection aims to trace back 200 years of immigration in France with fascinating testimonies, archive images, photographies and works of art. The Galerie des Dons invites anyone to tell their family’s or their own immigration story by depositting an object.

Get off the metro at: Metro Porte Dorée

Opened in 2006, this remarkable museum boasts an amazing wall of greenery and a glass façade which gives visitors a glimpse into the garden in front of the main entrance. The museum’s unique collection is dedicated to the study, preservation and promotion of non-European arts and civilisations.

Get off the metro at: Metro Alma – Marceau / Pont de l’Alma

The Musée Rodin in Paris reopens