Stitch in time: A quick guide to French folk costumes 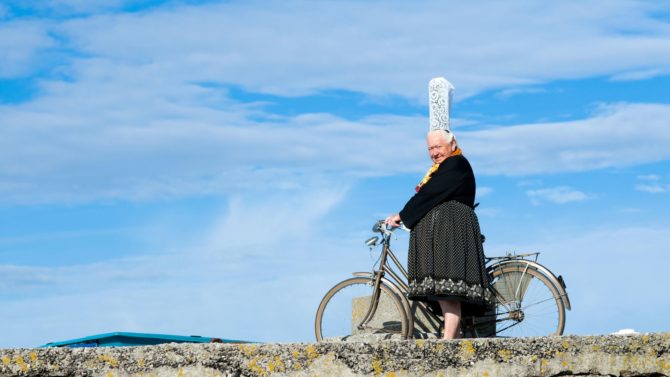 Far from being cut from the same cloth, find out how France’s traditional costumes are a sartorial salute to regional diversity

Brittany has its coiffe bigouden, Alsace its kutt and Provence, the couthiloun; wherever you are in France, each region is rightly proud of its traditional clothing. In a country oozing with fashion kudos, the sheer variety of styles – sometimes differing from one town to the next – comes as no surprise. Whether they’re worn with glee at a festival or preserved behind museum glass, these folk costumes offer a halcyon glimpse into a France of times gone by.

She surveys the Atlantic shore from her seaside pillar, the folds in her long dress motionless despite the breeze. The statue of La Bigoudène, as she’s known, may be in her 60th year of keeping watch over the harbour of Pors-Poulhan, west of Quimper, but her headwear has become no less eye-catching over the decades. Her coiffe bigouden – a towering, lacy hat which can stand up to 40cm tall – is the crowning glory of Finistère.
Legend has it, the coiffe bigouden found its stature as a way for women in 17th-century western Brittany to protest against prohibitive tax rises instigated by Louis XIV as part of the Revolt of the Papier Timbré. While the peasant men rioted, their wives were able to show their support by wearing these unusual headpieces. Their height was said to represent the area’s bell towers, which had been demolished to stop protestors from gathering when they heard the bells toll.

According to the must-visit Musée Bigouden in Pont-l’Abbé, however, this well-known version of events is incorrect. It was actually the inter-war period in the 20th century that saw the hat’s growth – it was said to increase in height by a centimetre every year. By the end of the Second World War, it had reached its maximum height – and a societal shift saw traditional styles fall out of fashion. In the 1970s, 31% of women over 47 in the Pays Bigouden regularly wore the famous coiffe – today, 95-year-old Alexia Caoudal is the last woman to uphold the tradition. Cadoual became famous when she, along with fellow Bigoudènes, starred in a TV advert for food company Tipiak in 2012.

The costume of the Pays Bigouden is a Breton emblem and must be seen in person at one of the many local festivals. As well as the teetering caps, look out for the beautiful embroidery on both the male and female garments that characterises the iconic style. Did you know? The Pays Bigouden used to be known as Cap Caval and stretches along the Baie d’Audierne, south-west of Quimper. The area takes its name from the headdress, rather than the other way round – bigouden is thought to come from the word bigoudi, a hair styling tool.

Over in Alsace, another piece of headwear made fashion waves in times gone by: the coiffe alsacienne, or even more satisfying to say, the schlupfkapp. This almost comically oversized bow has its roots in Strasbourg, and like its Breton peer, didn’t start off quite so large.

The headdress began as a coif tied by a ribbon, originally just a few centimetres wide in the 19th century.  With advances in industry during this period, bigger and bigger ribbons were able to be produced. By the turn of the 20th century, the ribbons had reached 35cm wide and could no longer be tied in the traditional way, but folded instead.

How your schlupfkapp was worn depended on your religious affiliation. The knot was worn by women of both Catholic and Protestant faiths, married or otherwise. The Protestant style was more severe: a black bow whose lengths fell to the shoulders. Catholic women were allowed more freedom with their design, having their waist-length bows embroidered or jazzed-up with other fabrics woven in.

Another traditional cap in the region during this era, the ornate coiffe à bec, was banned in 1793 by the Jacobin leader Saint-Just. Too provocative? No, it was considered ‘too German’ in the context of national reunification under the French Revolution.

The bow saw an unlikely renaissance as a symbol of identity in 2014. During the proposed fusion of Lorraine and Champagne-Ardennes, the ‘Alsaciennes Unies’ demonstration group chose to wear the great ribbon in protest against the separation of historic Alsace under the new regional boundaries.

To call the Arlèse a dress of the people seems a little disingenuous, as this stylish get-up used luxurious fabrics and was inspired by the fashion in Paris in the 18th century. It’s quite a contrast to the other famous Provencal costume, the more severe Costume Comtadin, which is worn in the former Comtat Venaissin.

Like many other local costumes, its fate may have been consigned to the history books if the Nobel Prize-winning writer Frédéric Mistral hadn’t stepped in. Mistral, who wrote in the Occitan language, was a keen proponent of Provençal culture and at the beginning of the 20th century, he created a great festival to promote the region’s clothing that he feared would otherwise disappear.

The Festo Vierginenco was the first iteration in 1903 of the present-day Fête du Costume. Young women would wear the costume to show their passage into adulthood. In the first year, 18 women participated but the following year there were 350 girls and the festival moved to the Théâtre Antique (an ancient Roman theatre). The festival now takes place in Saintes-Maries-de-la-Mer in Camargue country, and every three years a queen of the festival is crowned.

Mistral’s plan worked: the clothes in Arles were worn regularly until the 1950s and is a staple of local festivals nowadays. One of its ‘problems’ is that it comprises a special hat that only can be worn by people with long hair. Other parts of the costume for women are a lace, trapezium-shaped breastplate, a beautiful shawl and Provencal crosses. Earrings are reserved for married women only.

In 2011, the Conseil Régional de Provence-Alpes-Côte d’Azur proposed for the costume to be added to the Unesco list of Intangible Cultural Heritage, but it has not yet been added.

Previous Article Moving to France post-Brexit: What belongings can you bring tax-free?
Next Article French Properties: 5 houses with swimming pools for sale in France