What’s inside the May 2022 issue of FRANCE Magazine UK? 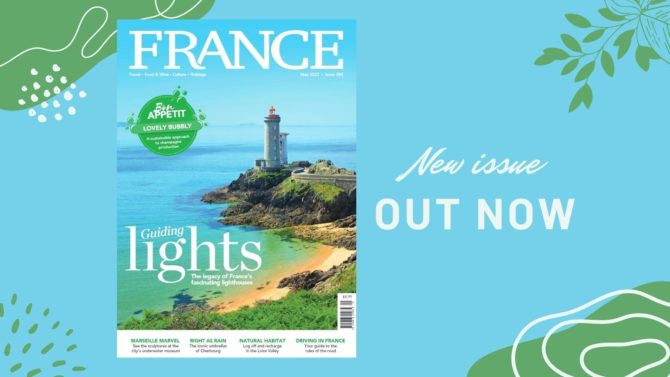 Did you know that May 1st is marked in France by handing out sprigs of lily of the valley as a symbol of good luck? This tradition is part of the Fête du Muguet and has been celebrated as far back as the 16th century.

This month, take a trip to Normandy with us to revisit another French icon – The Umbrellas of Cherbourg. Inspired by Jacques Demy’s classic musical, a real-life umbrella firm was set up in the port town in 1986 and today, their luxury parapluies are sold across the world.

You’ll need more than an umbrella when you visit France’s wettest new museum – the Musée Subaquatique de Marseille, located five metres below the Mediterranean. Don your diving or snorkelling gear and follow our intrepid writer underwater to see this unusual sculpture gallery that’s at one with the sea.

For more high-octane thrills, this month’s issue also includes a guide to spending summer in the beautiful Vallée des Belleville. If you’re looking for rest and relaxation, however, there’s a trip to two peaceful Loire Valley holiday spots, a sun-soaked tour of Narbonne, and a taste of some of the Champagne region’s sustainable tipples.

We love to hear from readers, so let us know which articles from our May issue you enjoyed reading. And if there’s something French, or somewhere in France, you’d like to see covered in the magazine, we’re all ears! Drop us an email at [email protected].

“Looking out across the Port de Marseille, it’s easy to see why this city is such a popular destination. Marseille’s stunning architecture and its beautiful beaches have long stolen the show. Although, standing at the GRASM de Marseille (club de plongée et d’archéologie) in the small Pharo cove dressed in my wetsuit and admiring the inviting blue of the sea, I have a feeling there’s a new player in town.

After a briefing with my (patient and kind) diving instructor, Bruno, we’re off. The sun is shining as we depart in the dive boat for Le Musée Subaquatique de Marseille (MSM), France’s first underwater museum. In 10 minutes, I’m looking onto la plage des Catalans, just 100 metres away. And submerged five metres below us, is an unusual exhibition of large sculptures resting on the seabed.

Goggles rinsed and flippers attached, Bruno and I are treading water and after a few more top tips from him, with my underwater breathing apparatus on, we submerge. I’m instantly transported into a different world. Cliché as it may seem.”

Read more from Victoria Gibson in the May 2022 issue of FRANCE Magazine.

“If you’re a skier, you will probably have heard of Val Thorens, Europe’s highest ski resort, and Les Menuires, which is in the same valley. Both are purpose-built resorts with plenty of ski-in, ski-out accommodation, largely designed with skiers in mind and built on farmland starting in the 1960s.

The two resorts, along with the traditional village of Saint-Martin from which the two arguably better-known resorts sprung are collectively known as Vallée des Belleville – and there is plenty going on in the valley during the summer as well as winter season.

Of the three, the original village of Saint-Martin with its narrow streets and traditional buildings is almost inarguably the prettier place to stay during the summer season. There’s a weekly market on Thursdays and the museum attached the tourist office is well worth a visit. It tells the story of how developers bought land from the Saint-Marin farmers to develop the higher resorts, and features video interviews with people who remember the village as it was.”

Read more from Catherine Cooper in the May 2022 issue of FRANCE Magazine.

“The great lighthouse at Alexandria, erected some 2,300 years ago, was one of the seven wonders of the known world. At around 100m, it was the tallest building of its era. In 1994, French archaeologist Jean-Yves Empereur discovered its earthquake-toppled remains lie on the seabed of Alexandria’s harbour.

The fame of the great Pharos lived on long after its collapse, and it lent its name to the first phares that were built around the coasts of France to guide mariners to safe haven or warn them away from dangerous shores.

Last year, the lighthouse at Cordouan was awarded UNESCO World Heritage status. Seven kilometres offshore, at the mouth of the Gironde, it has guided vessels en route to and from Bordeaux for more than four centuries. Built in 1611 and standing 67.5 metres tall, it’s the only French lighthouse still staffed by resident lighthouse keepers. In 1823, it became the first lighthouse to use the revolutionary system of lenses developed by the visionary Augustin Fresnel (1788-1827).”

Read more from Robin Gauldie in the May 2022 issue of FRANCE Magazine.

Like what you see? The May 2022 issue of FRANCE Magazine is on sale from 30 March. Take advantage of our great subscription offers and get FRANCE Magazine delivered straight to your door every month! You can also buy single issues from Mags Direct. Happy reading!

Previous Article Easter in Paris: fun-filled family activities for all ages
Next Article French Election 2022: Will it have an impact on the property market?