What’s inside the March 2022 issue of FRANCE Magazine UK? 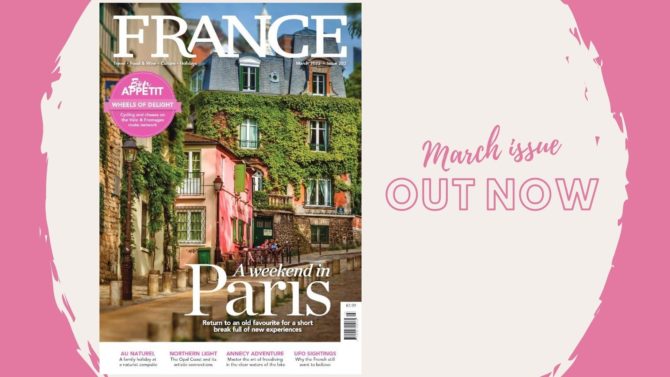 With Emily in Paris back on our screens, everyone’s attention is on the City of Light – so where better to be on the cover of our March issue? Pretty in pink is one of Paris’ landmark cafés, La Maison Rose in Montmartre, which also makes a cameo in season one of the hit Netflix show.

If you’ve got the Paris bug, head straight for editor Vicky Leigh’s ultimate guide to spending a short break in the capital. While the Notre-Dame Cathedral is sadly out of action, find out which stunning church is stepping into the spotlight, and discover the charms of a traditional bouillon for fast food, Paris style.

If you’re looking for an escape from city life, there’s plenty for you, too. Take a deep breath and go freediving in Lake Annecy or explore the peaceful lakeside town of Thonon-les-Bains. Or head to Haute-Vienne to meet Gandhi – a 52-year-old elephant who lives at Western Europe’s largest retirement home for elephants.

And finally… did you know France is the world’s number one naturism destination? There’s no better place to embrace going au naturel, and one of our writers shares his family’s fascinating experience at a Médoc naturist camping site.

We love to hear from readers, so let us know which articles from our March issue you enjoyed reading. And if there’s something French, or somewhere in France, you’d like to see covered in the magazine, we’re all ears!
In the meantime, here’s a taster of what you can expect…

“It’s hard imagining Sofie and Tony’s countryside escape to Nouvelle-Aquitaine yielding a more perfect idyll. Sporting powder-blue wooden shutters, their ancient farmhouse is set by a glassy clear étang. When I visit, autumn is transforming the verdancy of their surrounding woods to russet-brown hues, reds, and yellows. Bulbous pumpkins, fresh off their organic allotment are watered by the same pure borehole spring-water flowing from their taps.

And in their barn is … ho-hum, how can I put this … a 52-year-old elephant called Gandhi.

On a chilly afternoon, Gandhi is reluctant to leave her warm indoors until Sofie throws her a few ripe apples. Her trunk appears out the doorway, sniffing the sweet treats on offer. She saunters towards them and flips them with her trunk into her open mouth.

“Our neighbours were a little surprised and thought we were going to bring wild elephants here from Africa,” says Tony Verhulst. Yet from the moment Tony and his partner, Sofie Goetghebeur, moved onto this 29-hectare farmstead near Bussière-Galant in Haute-Vienne in 2016, the two former zookeepers had only one destiny in mind. To create France’s first, and Western Europe’s largest, retirement home for pachyderms – Elephant Haven European Elephant Sanctuary (EHEES).”

Read more from Mark Stratton in the March 2022 issue of FRANCE Magazine.

“The world pretty much assumed that when the first little green man stepped out of a flying saucer his first words would be ‘Take me to your leader’, not ‘Amenez-moi à votre chef’ – which could, let’s face it, have led to some confusion.

From the long-debunked ‘Roswell Incident’ of 1947 to movies like The Day The Earth Stood Still (1951) to ET: The Extra-Terrestrial (1982) and the 1990s cult series The X-Files, it was pretty much taken for granted that aliens would make their first landing in the Nevada desert, Washington DC, a California suburb, or even the North Pole – not in a Provençal village. But Trans-en-Provence, around 5km from Draguignan, was in 1981 the location of France’s most celebrated flying saucer sighting.”

Read more from Robin Gauldie in the March 2022 issue of FRANCE Magazine.

Combine cycling and eating cheese on the Vélo & Fromages network

“Ask anyone what they associate with visits to France and chances are that cheese will be somewhere near the top of the list, while cycling probably also features somewhere fairly prominent too (maybe after wine, though). With over 400 types of cheese and a cycling heritage that welcomes all standards of rider on its scenic roads and trails, it’s understandable that the country exerts an irresistible allure for those who enjoy riding bikes and eating cheese.

Long has a sandwich au fromage been the staple food of the hungry cyclist, inexpensive and fulfilling, the exercise itself being the perfect guilt-free justification for enjoying the savoury, fatty unctuousness.”

Read more from Lara Dunn in the March 2022 issue of FRANCE Magazine.

Like what you see? The March 2022 issue of FRANCE Magazine is on sale from 26 January. Take advantage of our great subscription offers and get FRANCE Magazine delivered straight to your door every month! You can also buy single issues from Mags Direct. Happy reading!

More in France in the UK, France Magazine

Previous Article Santé on Valentine’s Day: 4 French drinks to celebrate with
Next Article 5 secret places on the Cote d’Azur