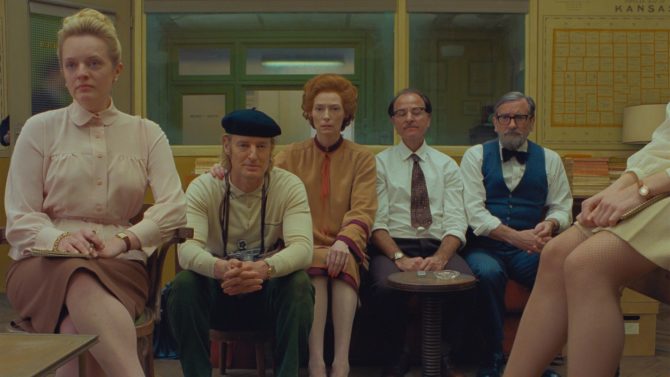 Wes Anderson’s passion for France is well documented. The Texan-born director owns a flat in Paris, has paid homage to Jacques Cousteau with A Life Aquatic and regularly collaborates with French composer Alexandre Desplat. With The French Dispatch – a whimsical, beautifully-constructed tribute to the cinema, food and cities of France – Anderson’s love for his adopted country comes full circle.

In the fictional French town of Ennui-sur-Blasé (actually Angoulême), American magazine The French Dispatch is run by avuncular founding editor Arthur Howitzer Jr. (Murray), who has assembled a group of eccentric contributors. As the New Yorker-type publication enters its final print run, the film pages through some of its most memorable long-read articles featuring, among others, a convict artist (Benicio Del Toro) whose muse is a prison guard (Seydoux), a young chess-playing activist (Timothée Chalamet) and a police commissioner fuelled by gourmet food (Mathieu Amalric).

With its odd, flawed characters, deadpan delivery of lines and signature symmetrical framing, The French Dispatch is vintage Anderson. Visually, this is as good as anything the director has done, with many scenes so busy (from a prison riot and animated car chase, to a split-screen comparison of how the neighbourhoods of Ennui-sur-Blasé have changed over time) that repeated viewings are necessary to take it all in.

Anderson has made films with more cohesion and meaning, but nothing in the director’s back catalogue has so many traces of the cinematic masters who’ve inspired him. Truffaut, Godard, Tati and Renoir all bleed through in what is a thoroughly French work of art.

The French Dispatch is in UK and US cinemas from 22 October.

Previous Article How to buy an apartment in France – and why you won’t pay fees to a freeholder
Next Article Travelling to France: Which airlines fly to French airports