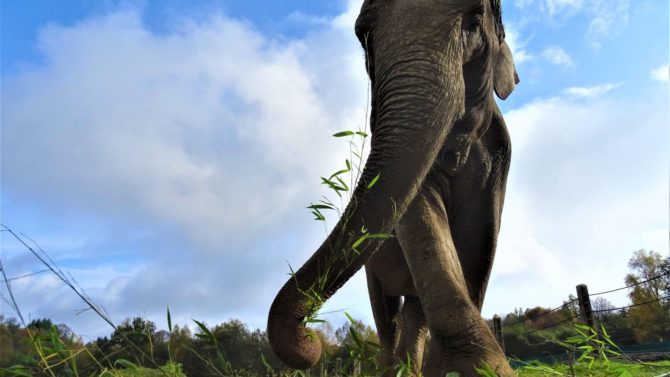 It’s hard imagining Sofie and Tony’s countryside escape to Nouvelle-Aquitaine yielding a more perfect idyll. Sporting powder-blue wooden shutters, their ancient farmhouse is set by a glassy clear étang. When I visit, autumn is transforming the verdancy of their surrounding woods to russet-brown hues, reds, and yellows. Bulbous pumpkins, fresh off their organic allotment are watered by the same pure borehole spring-water flowing from their taps.
And in their barn is … ho-hum, how can I put this … a 52-year-old elephant called Gandhi. On a chilly afternoon, Gandhi is reluctant to leave her warm indoors until Sofie throws her a few ripe apples. Her trunk appears out the doorway, sniffing the sweet treats on offer. She saunters towards them and flips them with her trunk into her open mouth.

“Our neighbours were a little surprised and thought we were going to bring wild elephants here from Africa,” says Tony Verhulst. Yet from the moment Tony and his partner, Sofie Goetghebeur, moved onto this 29-hectare farmstead near Bussière-Galant in Haute-Vienne in 2016, the two former zookeepers had only one destiny in mind. To create France’s first, and Western Europe’s largest, retirement home for pachyderms – Elephant Haven European Elephant Sanctuary (EHEES).
Tony and Sofie began planning EHEES a decade ago. Finally, in October 2021, they received Gandhi, a female Asian elephant – smaller than their African counterparts and morphologically different. Gandhi arrived from the cash-strapped Parc Zoologique de Pont-Scorff in Brittany, her transportation, a languorous 10-hour lorry ride hauling her 3,600kg.

After 20 years working with zoo elephants, the Belgian couple have tapped into a pressing need – an unfolding welfare crisis reflecting the psychological and physical inappropriateness of containing our largest land mammal in institutions for human entertainment. Public pressure is seeing European countries ban circus performances featuring elephants. In November 2021, France joined this list.
Sofie shows me around the sanctuary’s woodlands of oak, maple, birch, and fir, interspersed with open areas of lush grasses. From a hillside, she points across a small valley towards a field surrounding a woodland copse – 20 extra hectares they are about to acquire. “It will create space to host maybe six elephants,” she says.
Gandhi was taken from her mother in the wild and acquired by Denmark’s Givskud Zoo in 1973 before transferring to Brittany 23 years ago. “We’re not offering total freedom,” says Sofie. “But Nouvelle-Aquitaine can meet her needs. She will have trees to eat, the climate’s warm, and the grass green all year round.”

Tony explains that when they first arrived they introduced themselves to the local mayoress. “She was surprised at our plan,” he says with some understatement. “She predicted it would take years to get all our permits, and she was right. But we were determined to do something for elephants having seen the impact captivity has upon them.”
EHEES has been funded through their own savings and donations. There’s a second, newly built heated barn, where Gandhi spends her nights, if she chooses.  She has access, initially, to a four-hectare paddock as they slowly introduce her to her new home. Inside the barn Tony carries out daily health checks on her. “She has arthritis, it’s common in zoo elephants,” says Sofie, deploying apples to tempt Gandhi out. “They’re prone to abscesses because they do not move enough to get their food. They get fat and it damages their organs. And concrete is bad for their feet, which, in small confinement, get infected from standing in their own urine. We give her a pedicure each day but just moving on damp grass helps hydrate her feet and clean her nails.”

Tony and Sofie both comment how they’ve seen her reawakening since arrival. “She’s definitely getting cheekier,” says Sofie. “We provide her with a big bath of warm water, which she sipped at first. Now she likes to splash it everywhere.”
In its infancy the sanctuary is not receiving visitors but has plans to build a viewing platform for open days in the near future.

Previous Article Brexit, Belledonne and Basque Country: The April 2022 issue of French Property News (plus Living France) is out now!
Next Article 5 shopping districts you shouldn’t miss when you visit Paris