French gardens: 7 beautiful gardens to visit on the Côte d’Azur 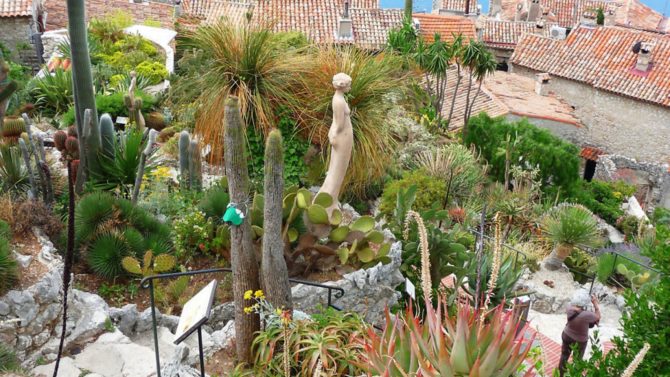 From famous gardens in Antibes and Nice to less well-known jardins in Menton and Mandelieu-la-Napoule, there are plenty of remarkable gardens to visit along the Côte d’Azur

Perched 429 metres above the Mediterranean Sea, the Jardin Exotique d’Èze boasts spectacular panoramic views of the Côte d’Azur. The botanic garden features a mixture of Mediterranean plants and succulents with a number of statures and places to sit and take in the view. There twisting paths have information about Èze’s history and artistic heritage. Entry to the garden costs €6 for adults and dogs on a lead are permitted.

In the Cimiez district of Nice you will find the city’s oldest garden, the Jardin du Monastère de Cimiez, created by Franciscan monks in 1546. Built in a chequerboard style, the garden covers an area of nearly 10,000m² and has changed little since the 16th century with fruit orchards, vegetable and herb gardens and plenty of ornamental flowers including a fragrant rose garden. There are also panoramic views over Nice and the artists Henri Matisse and Raoul Dufy are buried in the adjacent cemetery. Entry is free.

Could these be France’s prettiest gardens?

The iconic pink villa and its nine themed gardens were built between 1907 and 1912 on the Cap Ferrat peninsula by Baroness Béatrice Ephrussi de Rothschild. The formal gardens in front of the villa are known as the French garden and are shaped like a ship’s deck with views of the sea on either side. It features musical fountains and a temple of love inspired by Trianon at the Palais de Versailles. There is also a Japenese garden with a wooden pavilion, bridge and koi carp pond; an exotic garden full of succlents and cacti and a stone garden home to works of art. Admission to the villa and gardens is €14.

The exotic Jardin de la Serre de la Madone in Menton was created by celebrated landscape gardener Lawrence Johnston in the early 20th century. Similarly to Hidcote Manor Garden which was Johnston’s earlier creation, the garden is divided into sections by hedges and walls and there are terraces, pergolas, statues and ponds. Johnston travelled the world collection plants and there are many rare and exotic species in the Jardin Serre de la Madone. Entry to the garden is €8.

Gardening in France: what to do in spring

The 14th-century Château de la Napoule was restored by Americans Henry and Marie Clews in the early 20th century and the gardens were created then. Marie was the architect and landscape gardener and she designed formal French-style gardens with fountains and topiary as well as smaller gardens in the Italian style. There are also terraces which overlook the bay of Cannes planted with cypress trees and numerous statues and sculptures of mythical creatures dotted around the gardens.

French botanist Gustave Thuret built the Villa Thuret and its botanic gardens in Antibes in 1857. The garden is home to around 1,600 exotic species from the Mediterranean and other hot climate countries with fine collections of palm and cypress trees and new plants are introduced every year. It is now maintained by the INRA (Institut National de la Recherche Agronomique) and entry is free.

The Jardin du Palais Carnolès in Menton originally surround the summer residence of the Princes of Monaco. It was created by Prince Honoré II in 1725 and he planted many citrus trees. There are now 137 varieties of citrus trees in the gardens including orange, grapefruit and lemon trees. Menton is of course famous for its annual lemon festival in February when 145 tonnes of citrus fruits are used to create amazing sculptures. Admission to the Jardin du Palais Carnolès is free.

Previous Article WIN! A copy of A Taste for Vengeance by Martin Walker
Next Article Running a tea room in the Loire Valley