Where was Emily in Paris filmed? 8 locations in France to visit from the hit Netflix series 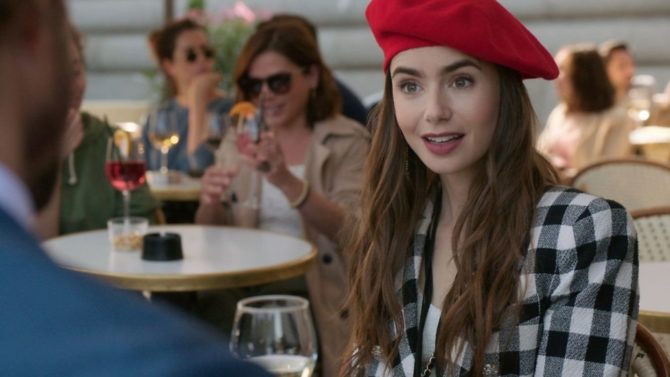 It’s the TV equivalent of Marmite – Francophiles have been split over the new Netflix series Emily in Paris, which sees enthusiastic Emily Cooper (played by Lily Collins) move from the US to Paris to take a job at a marketing firm called Savoir. Whether you’re an avid fan or not, the show is a great way to get your French fix from your sofa. Here are some of the most picturesque locations in the capital and beyond!

This Instagrammably perfect pink restaurant in Montmartre, with its pretty green shutters, is where Emily and Mindy have a drink and dinner before their fun-filled ‘night to remember’. Among the past patrons of this buzzy café were Pablo Picasso, Vincent Van Gogh, Gertrude Stein, so the girls are in good company.

Feeling like a fish out of water, Emily is spending a lonely lunchtime at the Jardin du Palais Royale when, as luck would have it, her soon-to-be new best friend Mindy makes an appearance. Later in the series, Mindy also treats the parkgoers to an impromptu musical performance. The garden is a small but popular urban oasis fronted by the Palais Royal. It’s framed by colonnaded arcades on three sides, and the shaded alleys, fountain and statues dotted about add to its regal allure.

A former foundry transformed into an art gallery like no other, the Atelier des Lumières makes for a magical date night destination – much to Emily’s displeasure, as she has to accompany her crush Gabriel and his girlfriend Camille on a trip there. Regardless, she is swept away by the visuals at this unique digital art gallery which projects works by master artists onto its huge walls.

One of Paris’ oldest coffee houses – and perhaps its best known – the Café de Flore is where Emily meets her first French beau, Thomas, who describes it as “the coolest café in all of Paris”. The Art Deco café in the hip Saint-Germain-des-Prés district has been featured in songs, music videos and films, plus its past guests included Pablo Picasso and Raymond Queneau.

This imposing opera house, now mainly used for ballet performances, is a suitably dramatic setting for Emily’s break-up with Thomas before a performance of Swan Lake. The 1,9790-seat venue inspired the novel The Phantom of the Opera. If you’re lucky, get tickets to one of the many ballets or concerts, or you can also take a tour of the building during the day.

Now this is a unique place for a party! Emily’s company, marketing agency Savoir, throws a shindig at one of Paris’ most unusual museums: the fairground museum. It’s a private museum that opened in 1996 and is home to a variety of classic fairground rides and stalls, including real merry-go-rounds.

The setting for that perfume advert, the Pont Alexandre III is the backdrop for when Emily tries to convince Antoine to change his outdated marketing strategy. This Beaux-Arts bridge spanning the Seine is a screen icon in itself, having appeared in everything from James Bond flick A View to a Kill to Woody Allen’s Midnight in Paris. It connects the 7th and 8th arrondissements and has a great view of the Eiffel Tower.

In need of an escape from city life, Emily joins her friend Camille on a trip to Camille’s home in Champagne – or so it’s meant to be in the series. The real-life Château de Lalisse is called the Château de Sonnay and is in the heart of the Loire castle country, not far from Chinon. Why not go and stay at the château’s four-star gîtes for the real experience?

Previous Article This charming French B&B is for sale in Occitanie
Next Article How to snag yourself some secondhand bargains in France…and 10 other things we learnt in the December issue of French Property News (plus Living France!)