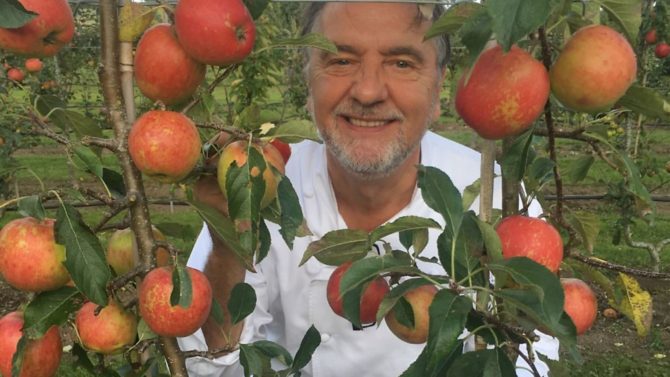 Over the past seven years celebrated French chef Raymond Blanc has planted an orchard of hundreds of heritage fruit trees in the grounds of his two Michelin starred hotel and restaurant in Oxfordshire.

The orchard at Belmond Le Manoir aux Quat’Saisons now contains 2,500 trees which yield around 60 tonnes of fruit for the kitchen every year.

It is full of ancient and forgotten varieties of British apples and pears, along with walnut trees, quince, medlars, apricots, nectarines, peaches, plums, damsons and cherries.

A further 600 heritage fruit trees have been added from Raymond’s home in the Franche-Comté region of France.

Raymond was born near Besançon and moved to England as a waiter before launching his own restaurant in Oxford which won its first Michelin star in 1979. He went on to buy a manor house in the Oxfordshire countryside transforming it into Le Manoir aux Quat’Saisons which has retained two Michelin stars for 30 years.

The estate has 11 gardens, including vast organic kitchen gardens, as well as the impressive orchard.

Raymond says: “I began to dream about an orchard filled with thousands of fruit trees.

“Today, we have an orchard with over 150 ancient varieties of apple. Each one has its heritage in a village or county that used to thrive on that particular variety.

“They tell the story not only of what we have lost in Britain, but also what we could regain.”

The Lost Orchard is a celebration of all these varieties, illustrated with black and white drawings and featuring information and anecdotes about each fruit, along with recipes and stories.

Try this Apple Beignets recipe from the book.

“I have fond memories of Mardi Gras, when the children of our village would dress up and visit every home, where we would receive a ‘penny’ and the fluffiest, delicious beignet.

My mother made her own version with the Reinette Grise du Canada apples that grew behind our house,and I still remember the beautiful contrast between the crisp, light batter and the soft, intense apple filling. The beignets are especially good served with chocolate sauce, ice cream, or a lovely English custard.”

In a large bowl, whisk together the egg, milk, oil, 100g of sugar and salt.

Into a separate bowl, sift together the flour and baking powder, then sieve this again into the egg and milk mixture. Whisk together until you have a smooth batter. Have a tray lined with kitchen paper ready.

In a shallow frying pan, carefully heat the oil to 180°C.

Cook the fritters in batches, dipping each apple ring into the batter and then carefully lowering into the hot oil. Fry on each side for 1-2 minutes until golden brown, then, using a slotted spoon, lift out and lay on the kitchen paper to soak up any excess oil.

Mix the 30g of sugar and cinnamon together in a shallow bowl or tray, then, while still warm, toss each fritter in the mixture, coating them evenly. Serve immediately.

The Lost Orchard by Raymond Blanc is published by Headline Home, priced £25.

Quiz: How well do you know your French patisseries?

Previous Article Why financially savvy buyers are purchasing French homes with a mortgage
Next Article The best ways to travel in France without a car…and 7 other things we learnt in the December issue of French Property News!