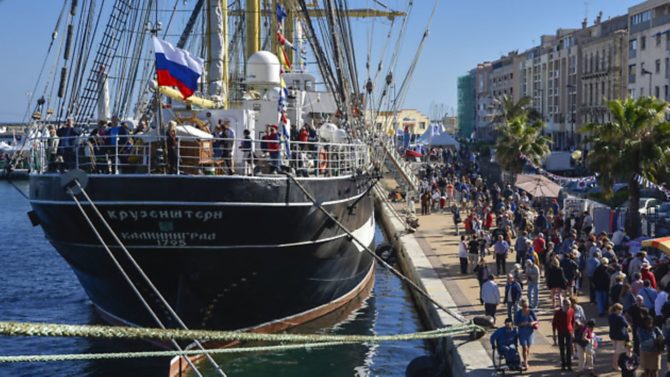 As spring arrives in France, there are plenty of festival and events happening, including the Paris half-marathon, a Normandy bike ride, a music festival in the Alps, a weekend of cheap cinema tickets and a boat festival in Sète. We take a look at what’s on in France in March

More than 100 ships take part in the Escale à Sète festival in southern France in March. Sète, in Hérault, is the longest serving port in France, and thousands of people head to the coast to join in with the festivities and admire the majestic vessels on display. There are also more than 100 concerts during the week and the chance to listen to the intriguing tales of those who have been at sea.

Film-lovers should take advantage of the Printemps du Cinéma event held over a weekend in March and visit the cinema for the price of just €4. An annual event, the Printemps du Cinema is organised by the Fédération Nationale des Cinémas Français and participating cinemas offer discounted entry to films (excluding 3D and IMAX) for the event. Details of the participating cinemas are available in the lead up to the festival.

If you’re looking to get fit and run off the last of the winter festivities or simply want to do your bit for a good cause, then set yourself the challenge of the Paris half marathon in March. The 21km route is undoubtedly one of the most scenic half-marathons and takes in the city’s iconic sites including the Eiffel Tower and Notre Dame Cathedral. More than 40,000 runners take part in the race and the winning time in 2016 was just one hour.

The Tour de Normandie covers a distance of 1,090km crossing all five departments in Normandy in seven stages. Each stage is an exhausting ride of between 143km and 166km the race is certainly a challenge! If that seems too much for you then you could always join the other spectators lining the scenic route to cheer on the cyclists.

An unusual music festival on the snowy slopes of the Alps, Rock the Pistes entertains skiers in the Portes du Soleil ski resorts in the Alps. For a week, the resorts host concerts from various musical artists, performing against stunning scenery. Tickets for Rock the Pistes include a day’s skiing as well as the concerts.

Marvel at the athletes attempting the calf-straining ascent of the Eiffel Tower in the Vertical Race in March. The 100 participants – a mixture of professionals and experienced amateurs – climb the 1,665 steps to the top in a race against the clock. The tower’s open design means spectators on the ground will get a great view of the competitors as they strain to surpass the winning time of 7min 50.93sec in 2014’s inaugural event.

Discover the latest trends in literature at the annual Livre Paris (formerly called the Salon du Livre), at the Expo Porte de Versailles exhibition centre in Paris in March. The annual book fair attracts around 1,200 publishers and 2,000 authors, who take part in interviews, debates and signings. Entry costs €8 for adults.

The D-Day race in March is a 15km obstacle course across sand, sea and forest on Normandy’s Juno Beach, one of the five beaches that Allied troops landed on during D-Day in 1944. The race is organised in commemoration of those involved in the D-Day landings. The racegoers begin either on the beach or swimming from a boat, and will encounter both man-made and natural obstacles along their way. Those who wish to enter can do so on their own or as part of a team.

Enjoy the brisk March air and join the 20km Traces du Fromage hike across the Aubrac plateau in March. The walk begins from two possible ski stations either Bouyssou à Laguiole or Brameloup. Along the way the group samples some of the finest food the Aubrac area has to offer, including revitalizing wine and meat, and of course, cheese.