Look inside the FRANCE Calendar 2018 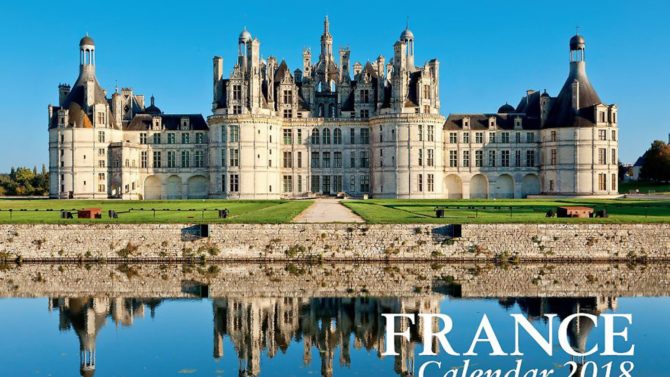 Take a look inside the FRANCE Calendar 2018 brought to you by FRANCE Magazine and discover the beautiful images of France we have chosen for you – order your calendar today!

For the cover of the FRANCE Calendar 2018 we chose one of the most iconic châteaux in the Loire Valley, the Château de Chambord. Built by François I in the 16th century, it is the largest and most visited château in the Loire Valley. Started in 1519 the château was originally intended to be a hunting lodge but quickly became one of the most ambitious and expensive architectural projects attempted by a French monarch.

Capital of the Moselle department in the north east of France, the city of Metz has a rich history going back some 3,000 years. It abounds with architecturally noteworthy buildings, including the Neo-Roman Temple Neuf Lutheran Church featured in the January image of the FRANCE Calendar 2018. It stands close to the scenic gardens of the Place de la Comédie on an islet between two branches of the Moselle river. The city’s numerous parks and gardens have also earned it the nickname La Ville Verte – the Green City, and make it a pleasant place to explore on foot.

Is there anything more classically French than blue shutters? The blue shutters taking centre stage in the February image of the FRANCE Calendar 2018 can be found in the city of Marseille on the Mediterranean coast. Marseille has undergone a vast transformation in recent years and alongside the historic Vieux Port and Basilique Notre Dame de la Garde you will find the futuristic MuCEM.

The March image of the FRANCE Calendar 2018 is a stunning view of the Normandy countryside from a hot air balloon – a great way to see a different perspective of France. In the distance you can see Mont Saint-Michel, an UNESCO World Heritage Site and one of France’s most popular attractions.

The picture-perfect island of Porquerolles is part of the Port-Cros National Park on the Côte d’Azur and remains a haven of vineyards, flowers and trees. With a permanent population of only around 350 people and no cars, the idyllic island is a popular destination for tranquil walks, bike rides or making the most of the small coves and inlets for some wild swimming.

The beautiful town of Sarlat-la-Canéda is a firm favourite with visitors to Dordogne and it’s easy to see why. There can’t be many better ways to spend a sunny afternoon than exploring the French market and then enjoying a coffee in one of the cafes on the Place de la Liberté.

The June image on the FRANCE Calendar 2018 is one of the many pretty riverside villages in France. Do you recognise it? Then enter our competition to ‘name that June’ and you could win a FRANCE Calendar 2019! Details on how to enter can be found on the 2018 calendar.

The July image of fields of sunflowers and lavender will instantly transport you to Provence. If you are in search of lavender in France then the Plateau de Valensole is a great place to visit – the carpets of lavender stretch for as far as the eye can see!

The mountains aren’t just for skiing, they are also popular in the summer with hikers as you can see from the August image in the FRANCE Calendar 2018. This hiker is passing a herd of cows and heading towards the Pic du Midi d’Ossau mountain in the Pyrénées

The gorgeous Château de Villandry was the last of the great châteaux of the Loire built during the Renaissance. It remains one of the most visited châteaux in France in part because of its splendid formal gardens which feature in the September image of the FRANCE Calendar 2018. The kitchen gardens here are so productive, that visitors can actually buy vegetables in the gift shop to take home.

The picturesque Château de Montsoreau stands on the banks of the River Loire, not far from Saumur and makes a beautiful picture for October on the FRANCE Calendar 2018. The château became famous thanks to Alexandre Dumas’ novel La dame de Monsoreau and you can learn more about the novel and the history of the castle from the exhibition inside.

The eye-catching image for November on the FRANCE Calendar is of the astronomical clock in Strasbourg Cathedral. The clock is the combined work of artists, mathematicians, technicians, clockmakers, sculptors and painters and the current mechanism dates from the mid-19th century. At 12.30pm the clock strikes solar noon with a parade of carved wooden figures portraying the different stages of life and Jesus with his apostles.

Paris covered in snow becomes even more romantic and magical and is the perfect image for December on the FRANCE Calendar 2018. The Tuileries Gardens are transformed and in the distance you can see the Ferris wheel and the Egyptian obelisk on Place de la Concorde.

The image for the forward planner of the FRANCE Calendar 2018 is the winner of our reader competition. This photo of the Château de Castlenaud overlooking the River Dordogne was taken by Simon Warren from Poole in Dorset.

Enjoy these beautiful images every day with the France Calendar 2018. A single calendar costs £11.99, but if you order 4 or more they are only £8.99 each.