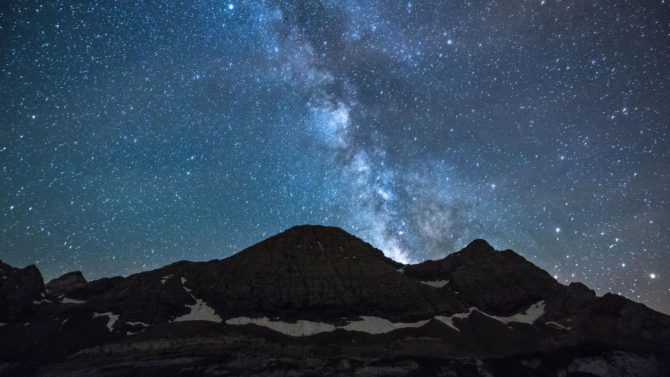 There are myriad swathes of France containing rural open spaces to delight anyone wanting to admire the cosmic wonders above us. In fact, three regions have been officially recognised by the International Dark Sky Association – an American-based non-profit organisation working to protect the night skies for present and future generations. Alpes Azur Mercantour, Cévennes National Park and Pic du Midi have been awarded the prestigious status of International Dark Sky Reserve, joining the other 13 certified reserves around the world.

What are International Dark Sky Reserves?

They’re public or private land of substantial size (at least 270 square miles) possessing an exceptional or distinguished quality of starry nights and nocturnal environment specifically protected for, among other reasons, its scientific, natural and educational interests. To qualify for consideration, minimum requirements include a sufficient number of communities within the Dark Sky Reserve adopting a comprehensive lighting management plan to control and limit light pollution. Amazingly, sky glow, which hides stars from our sight, can affect areas hundreds of miles away from urban development.

The first of France’s International Dark Sky Reserves, the Pic du Midi is found in a mountainous southwestern region and comprises a Unesco World Heritage Site (Pyrenees-Mont Perdu) and the Pyrenees National Park. The region is visited by around 1.5 million annually.

Efforts to earn the area Dark Sky status began in 1990 when budget cuts threatened the closure of its observatory and leading astronomical research facilities. Thankfully, the sterling efforts of its supporters averted closure of the site, which is named after a peak within the reserve.

All around this region mountain tops rise beyond 9,800 feet – such as 10,820-foot Pic du Vignemale, highest in the French Pyrenees – while six large valleys are found here, including Azun and Luz.

Accessible to everyone year-round is Pic du Midi and its observatory housing Europe’s highest planetarium. Around 135,000 people a year take the scenic cable car ride to the 9,438-foot summit. Standing on the large terrace, you can see for miles. The panoramic view encompasses over 200 miles of mountains and during a clear night the expansive starry skies are breath-taking.

Nature lovers will delight in knowing that the national park has a rich, unique plant and animal life. More than 4,000 animal species, including bears and lizards, and 2,500 different plants have been recorded.

While you’re in the area, make sure you visit Lourdes, with its thousand-year-old castle fort in the foothills, and the Cirque de Gavarnie. This huge amphitheatre-like valley is surrounded by limestone mountains soaring high into the pure Pyrenean air. Within the cirque you’ll discover the Gavarnie Falls: at 1,384 feet, it’s the highest waterfall in mainland France.

Where to stay: Le Montaigu hotel in Luz-Saint-Saveur is minutes from the town centre and offers comfortable accommodation. Prices from €80 per night.
Where to eat: You’ll feel on top of the world – literally – when you dine at contemporary Le 2877, atop Pic du Midi.

Situated in the southeastern corner of the Massif Central, the national park contains high plateaus and craggy peaks, including Mont Aigoual and the lofty Mont Lozère, the region’s highest mountain, whose ridges stretch across 24 miles. This peaceful corner of France is home to just over 71,000 people, many of whom work in the 400 plus farms scattered across this rural landscape. The most populated town is Le Vigan with a population just under 4,000.

Unquestionably among the darker spots in southern France, it’s not only popular with stargazing enthusiasts. Other favoured activities include mountain biking, kayaking and fishing. Meanwhile, walkers enjoy exploring 3,000 miles of waymarked paths and the eight long-distance hiking trails criss-crossing the national park.

The region hosts stargazing events, including La Nuit du Causse Noir. This three-day gathering, usually in July, is based at the Les Pradines campsite in the village of Lanuéjols, an area known for its wide spaces and exceptionally starry skies. Tickets for the last event cost €35 per adult, including three nights’ camping, and €15 for children (aged 4-15).

During the day, you’ll never be short of things to do and see. Being an area of wild, unspoilt countryside, must-sees include the many gorges, such as Tarn Gorge, a huge canyon punctuated by tiny villages. Another highlight is the Caves of Aven Armand. Discovered in the 1890s, the huge underground chamber is packed with stunning stalagmites, including the Grand Stalagmite. At over 90 feet, it’s reputedly the world’s largest.

And why not jump in the saddle and try some horse-riding or don walking boots and stroll the many trails, arguably the best way to truly appreciate these rich landscapes. Alternatively, hire a car and travel along quiet roads lined with beech and pine groves.

Where to stay: The Hotel de France is a three-star hotel in the quiet town of Mende and offers a warm welcome, decent food and rooms with a view overlooking the Pré-Vival Gardens. Prices from around €95 per night.
Where to eat: Situated in a former 18th century convent a stone’s throw from the cathedral, Les Voûtes in Mende offers everything from pizza to pork tenderloin.

Located in the southern Alps, it’s clear why this region has seduced astronomers for centuries. Mont Mounier, alias Black Mountain, rises to over 9,200 feet and is home to one of the first mountain observatories. Amateur astronomers’ favourite locations, meanwhile, include the Calern and Dina plateaus.

The diverse landscapes within this Dark Sky Reserve range from craggy peaks and hills draped in larch forests to wide Alpine flower-strewn pastures and picturesque lakes. Inevitably, the area attracts its fair share of tourists, whether that’s too enjoy skiing in the winter months or explore the natural landscapes other months of the year. Activities such as walking, kayaking and paragliding are popular, too. The region’s proximity to the Côte d’Azur and Nice is an added bonus.

Hire a car and drive the twisting roads to mountain villages while admiring the photogenic scenery en route. Comprising six valleys, such as Verdon and Vésubie, the Mercantour National Park is a particularly popular area. Close to the Italian border, it’s rich in flora and fauna with surveys identifying over 2,000 species of plants. And like the other Dark Sky Reserves, it has plenty of footpaths: the vast network includes the Grand Traverse of the Mercantour, covering 131 miles from Estenc to Menton.

Must-visit places include Vallée des Merveilles, a narrow remote canyon where 36,000 plus Bronze Age pictures are carved into the rock. A drive through Gorges de Daluis, a remarkable network of scarlet-coloured ravines, is not to be missed either, while a stop at Arboretum Marcel Kroenlein is recommended. The brainchild of Monaco’s Prince Rainier, over 15 hectares of this steep-sided location are carpeted in flowers, sculptures and trees.

Where to stay: Why not breathe in the fresh Alpine air by staying a night or two at a mountain refuge in the heart of the Mercantour National Park?
Where to eat: Try Le Cheval Blanc in Barcelonnette, open all year and offers a menu which changes weekly. Local and seasonal products used. Two courses from around €20.