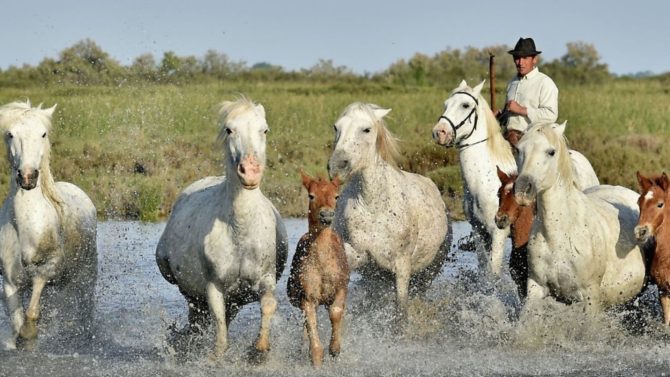 Discover the history of this hardy grey workhorse, synonymous with the marshes of the south of France

They’re the closest thing France has to cowboys: the gardians, the trident-wielding herdsmen of the miry Rhône delta. Every day, come rain, shine or the violent Mistral wind, they tend to their livestock as their predecessors have done for centuries – with the help of a special steed.

The Camargue horses – technically often ponies due to their diminutive size, although stallions can be bigger – have roamed the wetlands of Bouches-du-Rhône for hundreds, if not thousands, of years. Sturdy and Roman-nosed, they are one of world’s oldest breeds, evocative for some of the primitive horses daubed on the walls of Lascaux. They are believed to be descended from the now-extinct Solutré, who lived in Burgundy around 17,000 years ago. Born with black or dark brown hair, their white coat arrives during their fourth or fifth year.

Perfectly adapted to their harsh homeland, their hooves are larger and flatter than those of other horses, allowing them to navigate the mud and marshes with ease. Tackling water is also no problem for these plucky equines; indeed, they have been frequently used as stunt horses thanks to their strength in this area. They are hardy enough to live outdoors all year round, boast indefatigable stamina and a well-mannered yet lively demeanour; in a nutshell, the ideal companion for a Camarguais cowboy. Better still, they’re seemingly immune to the vicious local pest, the mosquito!

In the Camargue, the horses live alongside – and help to herd – the region’s eponymous cattle breed, which enjoys a semi-feral existence. The cows help to maintain the wetlands, which are a Ramsar site of international importance and home to 400 different species of birds alone. Watching a gardian and his mount round up the cattle is a show-stopping performance of speed, agility and nerve to awe even the most confident of equestrians.

Catch the gardians and their horses in action every 1 May in Arles, at the north of the Camargue, when the Fête des Gardians trots into town. The day begins with a fantastic parade through Arles, featuring both gardians and local residents in traditional costumes, and ends with some jaw-dropping horsemanship games in the historic setting of the Arènes d’Arles, the Roman amphitheatre.

But if you are fortunate enough to see the Camargue horses at work or play in their natural habitat, be prepared for a breathtaking experience. Watching them gallop through the sea spray, they seem at one with the water. ‘Né de l’ecume de la mer pour devenir le meilleur ami de l’homme’/’Born from the foam of the sea to become man’s best friend’ goes the legend – it’s not hard to see why.

France’s fantastic beasts and where to find them

Boating in the Camargue