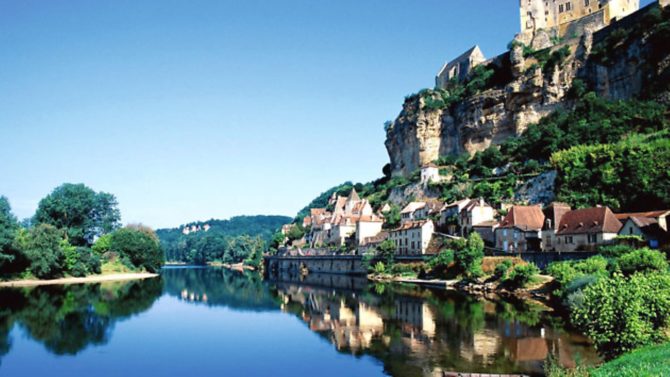 An insider’s guide to Dordogne in the south-west of France, including the main attractions to visit on holiday, the best towns and villages to visit and live in and where to buy property in Dordogne

The department of Dordogne in the region of Aquitaine-Limousin-Poitou-Charentes in the south-west of France has long been popular with British holidaymakers and expats, so much so that it has been given the nickname ‘Dordogneshire’. It’s hardly surprising Dordogne is so popular with tourists and expats – it enjoys warm, sunny summers and mild winters, peaceful countryside, beautiful villages and quaint towns and it is easy to reach via the airports of Bordeaux and Bergerac.

Dordogne was one of the battlegrounds of the Hundred Years’ War so you will find plenty of châteaux and fortified (bastide) towns and villages in the department. You will also find yourself eating a lot of rich food in Dordogne and the south-west of France – specialities include duck or goose confit, foie gras and truffles.

Train: The nearest TGV station is at Bordeaux and you can get regional trains to Dordogne from there

Places to visit in Dordogne

The capital of Dordogne is Périgueux, in the north of the department. Périgueux developed under the Romans in around 200BC and you can see evidence from Roman, medieval and Renaissance times in the town. There are the remains of a Roman amphitheatre and a Roman villa in the Vésunna museum and plenty of medieval and Renaissance architecture in the town. The impressive Saint-Font cathedral in Périgueux sits on a hilltop in the town and is a stop for pilgrims on the Saint-Jacques de Compostelle route.

Sarlat-la-Canéda is one of the major tourist attractions in Dordogne, especially in the summer. Sarlat-la-Canéda has more listed buildings per square metre that anywhere else in Europe, especially around the Place de la Libertié. The Saturday morning market in Sarlat-la-Canéda is very popular but if you are there during the week try the indoor market in the former church of Sainte-Marie. The highlight of a visit has to be a ride in the glass lift (ascenseur panoramique) to the top of the church belfry which gives you spectacular panoramic views of Sarlat-la-Canéda and the Dordogne countryside.

Bergerac is a sleepy medieval town on the banks of the Dordogne River that is popular with French and British second home owners. Bergerac’s old town (vieille ville) has some pretty streets and squares to explore, the church of Saint Jacques, Place Pelissiere and a statue of Cyrano de Bergerac, often with a queue of tourists queuing up to take a photo. The quai on the banks of the Dordogne River is a good place for a stroll, picnic or a gabarre boat trip. Saturday is market day in Bergerac, one of the largest markets in Dordogne.

There are 10 villages in France classified as Plus Beaux Villages de France (the most beautiful villages in France). Some of the best ones to visit are: La Roque-Gageac, on the banks of the Dordogne River and backed by steep cliffs, Monpazier, a great example of a bastide village with 32 listed buildings, Castelnaud-la-Chapelle, known for its two castles, one of which (Château des Milandes) was home to singer Josephine Baker, and Domme, perched on a cliff and offering exceptional views of the Dordogne valley. The other Plus Beaux Villages in Dordogne are Limeuil, St-Armand-de-Coly, St-Jean-de-Côle, Belvès, Beynac-et-Cazenac and St-Léon-sur-Vézère.

Just 30km north of Sarlat-la-Canéda you will find the Lascaux caves, one of Dordogne’s most famous attractions. The real cave decorated with prehistoric paintings is off limits but a replica is open to the public. The Lascaux caves are part of the prehistoric sites and decorated caves of the Vézère valley, a UNESCO World Heritage site.

Things to do in Dordogne

The south-west of France is passionate about its food and nowhere more so than Dordogne. There are markets in almost every town and village where you can pick up regional specialities including AOC Périgord walnuts, confit de canard and truffles. Some of the best markets in Dordogne are in Sarlat-la-Canéda, Issigeac, Périgueux and Bergerac. In restaurants, expect to find dishes of duck and goose with foie gras and truffles.

The Bergerac wines might not be as famous as the neighbouring Bordeaux wines but they are still delicious, especially the rosé. While you are in Dordogne, take a tour of some of the vineyards around Bergerac and indulge in some tastings to discover local producers.

The department of Dordogne is named after the River Dordogne which flows through the area and offers plenty of water activities including kayaking, a river cruise or a trip in a traditional gabarre boat. Cycle paths run alongside the River Dordogne if you prefer to stay on dry land and you will find plenty of pretty riverside villages to stop at and explore.

Dordogne is also home to a number of beautiful gardens to visit in the summer. The Marqueyssac gardens are mainly made up of box hedge clipped into elaborate swirling designs, high above the River Dordogne and offering fabulous views. During the summer evening the gardens are lit by candlelight with musicians playing among the plants. Les Jardins de l’Imaginaire are very modern gardens planted on a steep hill next to the town of Terrason.

Despite its popularity with British expats and second home owners, property in Dordogne is not as expensive as you might expect. The average property price in Dordogne is around €113,000, considerably less than the average property price in France (€157,600) and one of the cheapest departments in the Aquitaine-Limousin-Poitou-Charentes region. However, property prices vary considerably throughout Dordogne with the popular towns and villages more expensive. You can also choose whether you want to buy a property in a village with a large expat community or if you prefer to choose somewhere less visited by tourists and expats.

The more expensive area is around Sarlat-la-Canéda and the surrounding villages with an average property price of around €138,000, as well as the town of Périgueux and some of the Plus Beaux Villages.

Popular styles of property with overseas buyers are stone cottages found in bastide villages with exposed stone walls, wooden beams and French window shutters. Many houses in the south-west of France have pigeonniers (dovecotes) which are popular features. Because of the popularity of Dordogne with tourists, it is a good location to set up a B&B or gîte business so many property buyers look for large houses or outbuildings that would work as a B&B or gîte.

Road trip in the Dordogne valley

Dordogne at a glance

Why set up a business in Dordogne?

Explore the village of Lalinde in Dordogne

Previous Article What is the cooling-off period after buying a French property?
Next Article Running a luxury guesthouse in Picardy