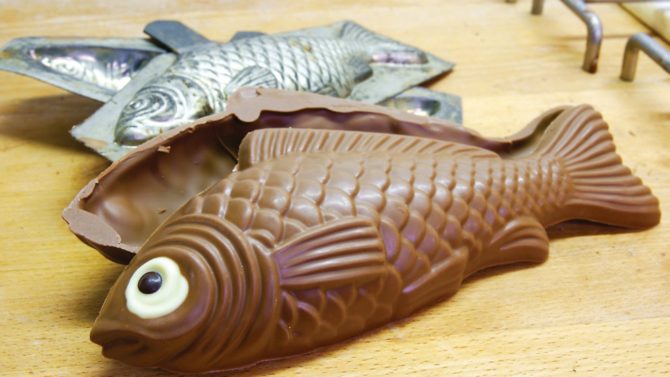 In France, April Fool’s Day is simply known as the ‘1er avril’ but it is a day when people, mostly children, try to hook paper fish on the back of unwary victims which will then walk around with a paper fish on their backs without their knowledge. Like in the UK, it is a day for pranks and jokes. When a prank is discovered, the prankster shouts out ‘poisson d’avril!’

The origins of le poisson d’avril are unclear, but many believe it is related to the end of Lent, a period where Catholics do not eat any meat. It was traditional for people to give each other food to celebrate the end of Lent and the beginning of Easter and fish was a popular gift. When the tradition of jokes became linked to that day, it was common for people to give each other fake fish as a joke. Today, it is common to see chocolates and pastries in the shape of fish.

10 things you need to nkow about French etiquette

18 French words to use at Easter

So why do we prank each other on April 1st?

Again, the origins of joking on the first day of April are unsure but the most common explanation in France puts the genesis of joking on that day in the mid-16th century. In 1564, king Charles IX allegedly decided that the new year would start on April 1st and not January 1st. From then on, people began giving each other presents in April and the tradition persisted – although the New Year quickly reverted back to January 1st – slowly becoming a bit of a joke. The gifts followed suite and became silly and funny presents.

Le poisson d’avril has become something of a national sport in the French media who enjoy writing shocking headlines and only revealing the ‘poisson’ at the end of the day.

In 1972, the radio station France Inter announced that following the United-Kingdom’s entrance in the EU, cars would have to drive on the left hand side in France.

In 1986, the Parisien newspaper wrote in its columns that the Eiffel Tower was going to be relocated to Marne-la-Vallée, because the Seine river was causing it to move. Many people actually believed this.

In 2011, Ouest France’s website announced that the first step of the Tour de France, set to begin on the Noirmoutier peninsula, would have to be completed by pedalo.