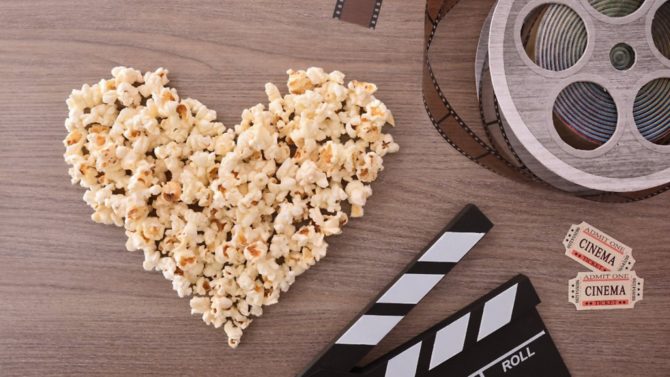 A speed typing contest hardly seems like the most romantic – or thrilling – of settings. But this surprisingly fast and furious discipline provides a lively backdrop to a budding relationship between secretary Rose (Déborah François) and her bristly boss (Romain Duris), as her typing success takes them from 1950s Normandy to New York.

A film whose English title is Heartbreaker probably doesn’t sound like the sort of thing you’d spend your loved-up Valentine’s Day watching. Alex (Romain Duris – again) operates an unusual business where he breaks up relationships by seducing the women to make them realise what they’re missing in their current set-up. But he isn’t immune to being charmed himself, falling in love with one of his targets (Vanessa Paradis).

Chocoholics will devour this delicious confection, which has more than a whiff of whimsy about it. At the centre of the saccharine story are chocolate-maker Angélique and chocolate firm owner Jean-René, both of whom are stricken with shyness despite being a match made in sugary-sweet heaven. When Jean-René’s business struggles financially, Angélique’s chocolate skills must save the day.

If you need your Audrey Tautou fix but can’t face watching Amélie for the thousandth time, try this Breakfast at Tiffany’s-inspired flick. Irène (Tautou) is a gold digger who meets Jean (Gad Elmaleh) at a luxury hotel, mistaking him as a millionaire when he is, in fact, a waiter. He keeps up the ruse to try and stay in favour with Irène, with whom he’s fallen in love – but is her heart set on love or money?

Taking blind dates to the next level are pianist Machine (Mélanie Bernier) and her reclusive neighbour Machin (Clovis Cornillac). When Bernier’s character moves into a new flat, she thinks it’s haunted; it turns out that the only spook is her neighbour who tries to scare newbies into moving out. After consistently winding each other up with their noises, they ultimately bond over her piano playing and ultimately decide to ‘date’ each other – which entails talking to each other through the hollow wall that separates their flats.

When Alice (Virginie Efira), a thirty-something fashion magazine editor, is accidentally caught in a compromising situation with a student twenty years her junior (Pierre Niney), it gives her career a surprising boost. She cultivates a fake relationship with the unwitting young man, Balthazar, who doesn’t realise he’s being strung along and is totally taken by her. Will his love ever be requited?

Imagine spending an entire transatlantic flight sitting next to your ex. That’s exactly what happens in this fun flick, set in the skies between New York and Paris. Former lovers Antoine (Nicolas Bedos) and Julie (Ludivine Sagnier) are coincidentally neighbours on the same flight. Julie is on her way to marry her new partner Franck, but Antoine has other plans…

If you like romcoms that make you think, here’s a film for you. A left-wing young woman, Bahia (Sara Forestier), sleeps with right-wingers to try and convince them to change their political views. However, the free-spirit ends up falling in love with an unlikely partner. There’s even a cameo from former French Prime Minister Lionel Jospin!