7 France-themed books to buy for Francophiles this Christmas 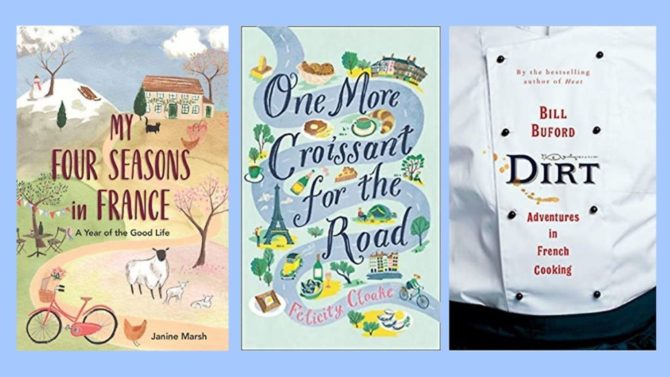 Struggling for something to buy the Francophile in your life? Want something that you can easily pop in the post for your France-loving friends scattered across the country? Look no further than our books round-up, with seven top French titles that will enchant all ages. Whether you’re looking for an expat’s adventures in France, a fun French children’s book or a travelogue, we hope we’ve got something for you!

Take a high-flying American journalist and plonk him and his young family in France’s culinary capital, where he trains as a chef in the city’s top kitchens. That’s the premise of this rip-roaring buffet of a memoir from The New Yorker’s Bill Buford, who throws himself into his new life at the bottom rung of Lyon’s world-famous gastronomic scene with boundless enthusiasm, despite the challenges of tricky colleagues, a limited knowledge of French, and family matters. This is no typical expat-in-France tale and all the better for it – Buford’s Lyonnais capers make for a literary feast.

One More Croissant for the Road, Felicity Cloake (£9.99, HarperCollins)

If, like me, you think the Tour de France needs more croissant stops along the way, Felicity Cloake has done the groundwork on this buttery cross-country cycling odyssey. You may know Cloake from her brilliant ‘How to cook the perfect…’ series from the Guardian, and One More Croissant retains the same flavour; once again, Cloake is on the pursuit of perfection: this time, for France’s best croissant, ranking them as she goes. On the way, there are plenty of regional dishes to sample and friendly folk to give Cloake a boost as she pedals her way through the French countryside. Warning: This book will make you extremely hungry and intensify your longing to visit France tenfold!

FOR LOVERS OF REAL-LIFE TALES

Fifteen years after making the move of a lifetime – from London to a tumbledown house in northern France – catch up with Janine Marsh, her husband and their menagerie of animals in her latest book. Set against the bucolic backdrop of the Seven Valleys in Pas-de-Calais, Marsh’s follow-up to 2017’s My Good Life in France is both a riveting memoir and a dive into France’s culture and traditions, all narrated in Marsh’s typically humorous style. It’s the literary equivalent of a hug and a nice cup of tea – comfort reading at its finest that will stoke any dreams of a cross-Channel move.

It’s not just the snowy setting that sends a shiver down the spine in Catherine Cooper’s debut novel. In the fictional Alpine resort of La Madière in the Nineties, two brothers go skiing but only one returns. Twenty years later, a body is discovered after an avalanche but is it the missing man’s? A time-switching tale of revenge and an uneasy read (as the best thrillers are), we can already imagine the Hollywood adaptation.

Think you know France? Think again! Put simply, this is a book of experiences: from sampling the oyster farms of Cap Ferret to freediving in a Calanque, not to mention the best hotels and restaurants to enjoy. Ypma’s authoritative take on the traditional guidebook is proper coffee table fare, with glossy photos and evocative write-ups of his favourite things to do in France that you might not necessarily be familiar with. A book you’ll refer to again and again.

Look at any list of offbeat Paris destinations and you’re bound to find Deyrolle. A visit to this curiosity cabinet in the 7th arrondissement is a fascinating deep dive into the worlds of taxidermy and entomology. This new book from Flammarion is unusual in that it’s designed so that the 21 nature prints within can be carefully removed and framed on your wall. From pineapples to herbs and trees, there are some beautiful drawings to choose from.

Introduce a new generation to the joys of the French language with this fun children’s book, set in a lost and found department run by Mr and Mrs Frog. When a little French mouse who has mislaid something comes to their office, Mr and Mrs Frog have to try and work out what he’s lost. With adorable illustrations from Peter Baynton and a fun plotline, it makes learning French feel effortless!