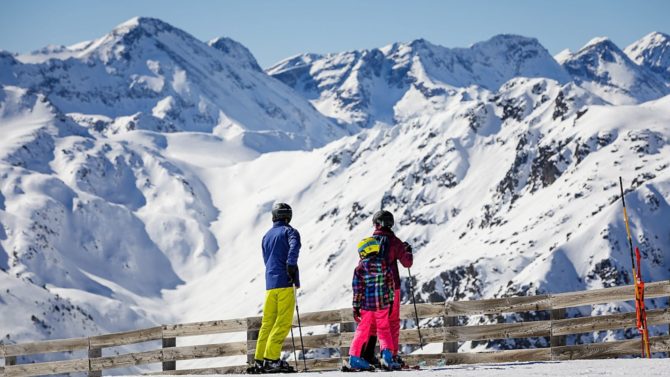 The Alps generally spring to mind when you think about skiing in France – however, the Pyrenees offer an interesting alternative if you want to try something different.

Resorts tend to be smaller – though there’s plenty to keep all levels of skier happy – with a relaxed atmosphere and often lower lift prices. There’s also plenty to do away from the pistes, including natural thermal spas. Easy to access from the UK via Toulouse, flights during peak season are often lower too. Here are four of our favourite Pyrenean resorts.

Close to the Catalan border with a French/Spanish feel, Les Angles is an easily navigable resort with 55km of largely tree-lined slopes and a pretty old town (as well as more modern sections). It’s the only Pyrenean resort where you can ski all the way down to the traditional village and with three lifts from the bottom, there’s no morning bottleneck to get onto the slopes.

All the slopes are orientated the same way so no one can get too lost and you may be happy to let older children have a bit more freedom than in a larger resort. There’s a magic carpet serving some nice gentle green runs for beginners, as well as some black runs which are left unpisted yet still patrolled for the more adventurous – one has a terrifying 80% gradient.

New for this winter there’s a 2.5km luge on rails which starts at 2,000 metres and will whizz you down the mountain at up to 42kmph. As well as restaurants both on the slopes and down in the village, there’s also an unusually lovely ‘hors sac’ picnic room with a huge terrace for sunny days and a real fire where you can grill meat.

If you don’t want to ski all the time there are plenty of other things to do – you can take the kids on a covered merry-go-round or to visit the animal park where native Pyrenean animals including bears and wolves live in semi-freedom. With 60% of the resort above 2,000 metres and 350 snow cannons, conditions tend to be good throughout the season.

Where to stay: The first property with the European EcoLabel in the Pyrenees, Chalet Ana is just 500 metres from the pistes. It offers eight stylish flats with hotel service plus a sauna, hot tub and spa treatment area. An apartment for two starts at around €190 per night with discounts available on stays of three nights or longer.

Where to eat: Le Chalet is one of the nicest self-service restaurants at altitude I’ve visited in France, starters include a variety of salads and for your main course you can mix and match various types of fresh pasta with different home-made sauces, or opt for a steak cooked over a real fire. Find it at the top of the Les Pelerins lift.

What to see: Wolves, bears and other native Pyrenean animals including reindeer and wild boar live in semi-freedom in the almost 100-acre animal park, Parc Animalier Les Angles. There are two walking circuits of 1,500 metres and 3,500 metres suitable for all ages. Entry €15 for adults, €13 for children, free for under-4s.

The largest ski area in the Pyrenees with 100km of pistes, skilled off-piste skiers can enjoy an itinerary from the peak at nearly 3,000 metres – it can be pretty hairy so you need to pick your day and go with a guide!

There’s also some excellent tree skiing to be had in the Barèges sector down from the restaurant chez Louisette. Grand Tourmalet is made up of the modern La Mongie, which is close to the slopes, and Barèges, which is pretty and traditional but a short bus ride away.

The action doesn’t stop when the sun goes down here either with plenty more on offer than your traditional apres-ski bar (though of course there are those too). In the late afternoon/early evening there are often huskies at the bottom of the slopes which are happy to be stroked and petted as they wait to take people out on sledges, and the magic carpet on the lower slope stays running so you can sledge on a floodlit piste.

You can take a trip on a snowmobile (there are even electric versions that kids as young as six can drive) or hitch a lift up the slopes on a piste-basher to watch the sunset. Grand Tourmalet is also home to Pic du Midi – France’s highest observatory.

Where to stay: Try Logis Le Central in the heart of Barèges.

Where to eat: At the foot of the pistes, Le Schuss is a cosy chalet-style restaurant, open all day from breakfast through to dinner and beyond. There’s a fireplace inside, a large south-facing terrace and a menu of traditional, hearty dishes such as fondue and mountain burgers.

What to see: A visit to the Pic du Midi observatory at 3,000 metres is something not to be missed.

Not every mountain-lover is an alpine skier and even plenty of those who are like to try a different activity now and again. A stay in Ax-Les-Thermes makes it easy to access four different resorts – plus a few others if you want to go a little further afield.

Ax 3 Domaines has 83km of pistes split over three areas, as well as great opportunities for off-piste skiing and a separate area dedicated to beginners. Ascou is on the other side of the valley and is a cute, small resort which is ideal for families, offering tree-lined pistes and a sheltered nursery slope. Just down the road you also have Plateau de Beille and Domaine de Chioula which are the places to go for cross-country skiing and snow-shoeing, with well-laid out and signposted paths.

Chioula has a cosy refuge where you can stay and have lunch after your morning snowshoe or ski, or even stay overnight. Plateau de Beille also has an excellent sledging area with a magic carpet, as well as other activities on offer such as igloo-building and husky-sledging.

Ax-Les-Thermes itself is a traditional town with an excellent spa, Les Bains du Couloubret, powered by natural thermal water – the same water also helps keep the pathways free of snow and ice in the winter from underneath.

There are even several footbaths in the town where you can sit and ease your aching feet, completely free of charge. Ax-les-Thermes is linked to Ax 3 Domaines by a gondola, so there’s no need to drive to get to the slopes in the morning if you’re skiing.

Where to stay: In the heart of the town, a three-minute walk from the gondola up to Ax 3 Domaines, the simple yet cosy Le Chalet offers a wide variety of rooms including well laid-out family rooms, plus there’s a gastronomic restaurant. Double rooms from around €65.

Where to eat: At 2,030 metres on the pistes of Ax 3 Domaines, Le Louzat is set among the trees with a beautiful view over the mountains.

What to see: In the middle of the forest at a park dedicated to the conservation of the species, you can watch wolves being fed in a natural environment as well as having a go at petting goats, pigs, lambs, rabbits and donkeys at la ferme de Monsieur Seguin, the Maison des Loups.

Spa-lovers will adore Balnéa in Loudenvielle which has three outdoor pools at varying temperatures and mountain views. There are also two entirely separate pools just for families, so those with young children don’t miss out, but most of the spa stays calm and tranquil. Inside there are various other pools and rooms including one where you can float listening to underwater music and some gorgeous heated granite loungers.

Loudenvielle itself is set by a large lake and has a village-like atmosphere with lots of green space making it a pleasant place to wander, plus the new SkyVall lift can whisk you up to Peyragudes with its 60km of slopes if you want to meet the rest of your group for lunch or similar.

The area is well-known for parapente which takes place all year round for the more adventurous, or you could take an outing on a piste basher or try out a Fat Bike or trotinette. James Bond fans might also enjoy Peyragudes’ Bond associations of which it is very proud – part of Tomorrow Never Dies was filmed here. There is now a 007 piste which opened in 2016 and a 007 Altibar at the top of the pistes where you can enjoy champagne and oysters on a sunny day, relaxing on directors’ chairs emblazoned with the names of the Bond actors.

Where to stay: The new four-star Mercure is just a two-minute walk from the SkyVall lift to Peyragudes. The hotel’s own chocolaterie offers an afternoon ‘goûter’ by the fire, plus there are two restaurants serving traditional local food and a wellness area. Family and duplex rooms are available.  Double rooms from around €155 per night.

Where to eat: A short walk around the lake from Loudenvielle to Genos, the friendly, cosy restaurant L’Auberge du Chateau is set in a restored barn. Its excellent, locally sourced meat is cooked over an open fire at one end of the restaurant and then served with frites cooked in duck fat or vegetables of the day.

What to see: Head to Balnéa. With both indoor and outdoor pools as well as various saunas, steam rooms and more, this inclusive yet luxurious spa has separate pools just for families.

Previous Article Beautiful south: 9 properties in Provence-Côte d’Azur for under €200,000
Next Article French Property: The most popular houses for sale in January 2022