A guide to the Brittany town of Morlaix 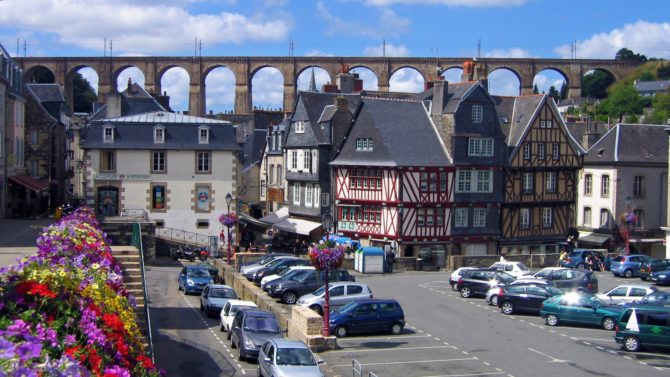 Set back from the north coast of Finistère, at the bottom of a river mouth, lies what used to be the biggest port in Brittany during the Middle Ages. Some 15,000 Morlaisians live in the town of Morlaix, located at the confluence of two rivers, the Queffleut and the Jarlot, which form the Dosenn (or Morlaix river) before it flows into the English Channel.

Evidence of the town’s prosperous past can be seen on the Grand Rue, with cobblestones and grand half-timbered houses lining the narrow alleyway. On this street you’ll also find the Maison à Pondalez which was restored in the 1990s and has one of the best-preserved ‘pondalez’ (inner spiral) staircases in Morlaix. Half-timbered houses in this style were built by merchants, with a small ground-floor surface area that grew with each added floor, creating overhangs, allowing them to keep merchandise and lower timber dry as well as avoid taxes that were calculated by ground-floor surface area. The defensive structure known as the Château du Taureau was built in the 16th century to protect the bay and is the only offshore fortress in Brittany. It was originally a lookout, then became a prison, sailing school and ultimately a historic monument in 2006, attracting thousands of tourists each year.

Many enjoy visiting the Musée des Beaux-Arts de Morlaix, a fine arts museum, or seeing inside the Duchess Anne of Brittany’s house, which is a well-preserved half-timbered Renaissance building. There’s a market every Saturday on the Place des Otages, dwarfed by the impressive Viaduct of Morlaix which cuts across the north of the town. On a peninsula not far from Morlaix you’ll find Europe’s oldest and largest megalithic mausoleum. Built in 4500BC, the Cairn of Barnenez predates Egypt’s pyramids.

The Pavé Morlaisien is a delicious cake made from almonds and apples, and the Kig ha farz meat stew is popular in Finistère, as are the fruits de mer of Brittany.

The average house price in Morlaix is €1,426/m2, considerably lower than the departmental average for Finistère which is €1,820/m2.

Previous Article 6 unusual things to do in Lyon
Next Article FRANCE Magazine: What’s inside our new January 2022 UK issue?