5 fascinating Paris Métro stations to stop at and savour 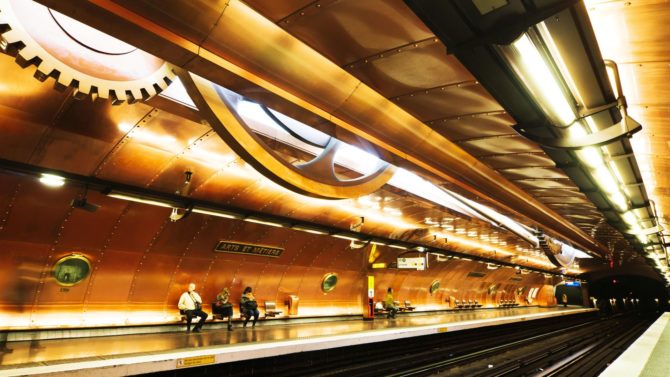 Subway stations aren’t normally somewhere you’d linger, but there are some interesting Paris Métro stops that will change your view. From a steampunk-style station inspired by Jules Verne to a stop where the walls are adorned with money, keep an eye out for these Métro stations on your Parisian travels.

When you visit the Musée des Arts et Métiers, housed in the grand old Royal Priory Saint-Martin-des-Champs, make sure you take the Métro there for an extra artistic experience. Hidden beneath the streets of the troisième is a steampunk-style set of platforms that seem straight from the pages of a Jules Verne novel.

The station was redesigned in 1994 to celebrate the bicentenary of the Conservatoire National des Arts et Metiers (CNAM), the higher education institute within the museum. Tasked with the job was Belgian comic book artist François Schuiten, whose quirky work takes inspiration from René Magritte, Gustave Doré and, of course, Verne; that same year, he had been asked to design a new cover for Verne’s Paris in the Twentieth Century.

Great expanses of copper panelling, portholes and enormous cogs suspended from the ceiling all help transport the passing traveller to a Paris of Schuiten’s imagining. Everything from the seats to the rubbish bins adheres to the theme, and atmospherically dim lighting adds to the station’s allure. While you’re waiting for your train, peek through the portholes for a glimpse into another world.

Below the Place de la Bastille is another art display marking a bicentenary – this time, fittingly, that of the French Revolution in 1789. Ceramicists Odile Jacquot and Liliane Belembert created beautiful murals depicting scenes from the Revolution that were installed in the station in 1989. The station stands under the site of the former Bastille prison that was stormed in the flashpoint of the Revolution and if you go to the platform for the number five line, you’ll find a small part of the original prison walls and a useful information panel.
4th/11th/12th arrondissements
Métro: Lines 1, 5 and 8

Money, money, money! The Pont-Neuf station has its proximity to the Monnaie de Paris, the Paris mint, to thank for its design. The majority of coins are minted in the institution’s facility in Pessac, Gironde, but its symbolic home is on Quai de Conti where special coins and medals are struck. Enormous reproductions of the mint’s many coins over its long history (it was founded in 864AD) are dotted around the station, while glass exhibition cases let you get up close to some special pieces. There’s even an old coin press on display!
1st arrondissement
Métro: Line 7

It’s the entrance to this busy station that makes people stop and stare – specifically the one on Place Colette. Created by Saint-Étienne-born designer Jean-Michel Othoniel, this contemporary artwork was installed in October 2000 to mark the centenary of the Paris Métro. It consists of two cupolas – one representing day, the other night – covered with colourful beads made from the famous Murano glass.
1st arrondissement
Métro: Lines 1 and 7

This Métro station is like the warm-up act to the great museum itself! Under the instruction of then-Minister for Cultural Affairs André Malraux, Louvre-Rivoli has been adorned with copies of exhibits from the institution since 1968. Today you can see nine works of art including interesting sculptures.

Previous Article Why the French love an apéritif and how you can enjoy the ritual too – especially at Christmas
Next Article Book Competition: Win a copy of Damson Skies and Dragonflies by Lindy Viandier