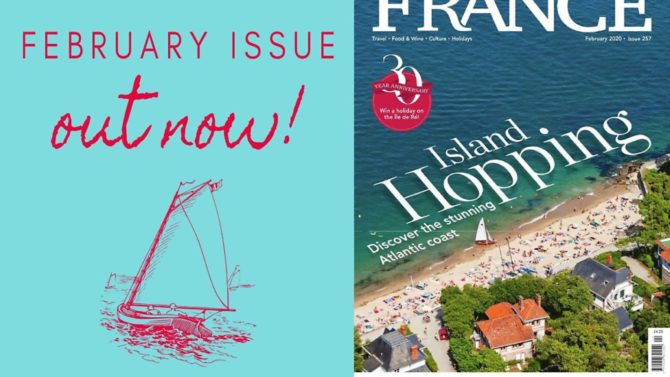 Each month, we share with you some interesting tidbits that we’ve learned about France while putting together that month’s issue. But this issue of FRANCE Magazine is extra special, because we’re celebrating our 30th anniversary! Over the past 30 years the FRANCE team has visited what feels like almost every corner of the Hexagone (although there’s still plenty to explore!) and devoured croissants and croques monsieurs aplenty along the way. Below are 30 interesting facts about our favourite country to celebrate our 30 years. Did you learn something new?

The February issue of FRANCE Magazine is available now – get your 30th anniversary copy here! Or take advantage of our great subscription offers and get FRANCE Magazine delivered straight to your door every month.

2) The French Army was the first to use camouflage, doing so during the First World War.

3) Each year, the average French person consumes 25kg of cheese; that makes France the greatest consumers of cheese worldwide.

5) Immense Mont Ventoux, the so-called Giant of Provence, is 20 degrees colder at its top than at its foot.

6) Paris Gare du Nord is the busiest railway station in Europe, with around 700,000 passengers a day passing through.

8) According to a zany old law, it’s illegal to name a pig Napoleon in France.

9) Emmanuel Macron was the youngest ever French President, at the age of 39. He was also the youngest head of state since Napoleon.

10) The oldest café in Paris is the Café Procope, opened by Sicilian chef Procopio Cuto in 1686. It’s in the 13th arrondissement if you fancy popping in for a coffee.

11) Mon Oncle by filmmaker Jacques Tati was the first French film to win the Academy Award for Best International Feature Film, back in 1958.

12) The most visited attractions in France are Disneyland Paris, then the Louvre and finally Versailles. Which is your favourite?

13) The oldest tree in Paris is 417 years old and can be found in Square René Viviani.

14) The oldest person ever whose age has been independently verified is Frenchwoman Jeanne Calment, who lived to 122 years, 164 days. She died in 1997.

15) Le Petit Prince, the bestselling children’s book from Antoine de Saint-Exupéry, is one of the most translated books ever, having been published in over 300 languages and dialects.

16) There are over 5,700 restaurants in Paris, with the city’s most popular cuisines being French, Asian and Indian.

17) Mont Aigoual in the Cévennes National Park is the rainiest place in France – in fact, the heavy rainfall gave the mountain its original name, Aiqualis (the watery one).

18) As well as English, France is the only other language that is taught in every country in the world, with 100 million students worldwide.

19) You might think macarons are French, but they’re actually Italian! They were brought over by Catherine de Medici in the 16th century.

20) Paris’ motto is Fluctuat nec Mergitur, meaning: ‘She is tossed by the waves but does not sink.’

21) France was the first country to have vehicle number plates.

22) The French Army still use carrier pigeons – they’re actually the sole army in Europe to still use them!

23) More people speak French in Africa than in France.

24) The Louvre was originally built as a medieval fortress to protect the French capital during the reign of King Philippe Auguste in the late 12th and early 13th century.

25) On average, two recipe books a day are published in France.

26) During cold weather, the Eiffel Tower shrinks by about 6 inches.

27) The headquarters of the Catholic Church was moved from Rome to Avignon for almost seven decades in the 14th century.

28) There are more dogs in Paris than children.

29) France has the highest number of recipients of the Nobel Prize for Literature, with 16 Laureates.

30) You’ll find one of the world’s oldest wines in the Cave Historique des Hospices de Strasbourg, home to a barrel of the stuff dating back to 1472.