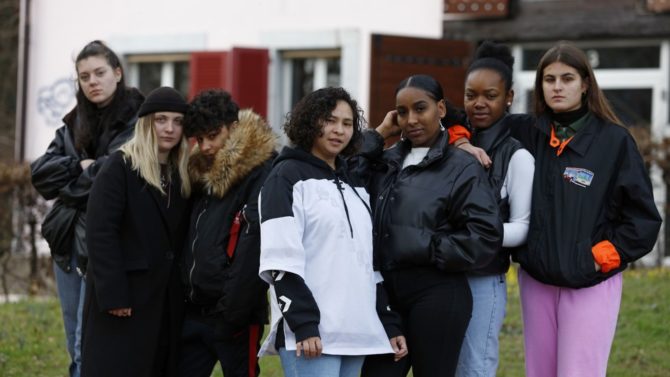 LA MIF
Release date: In cinemas from 25 February
Family matters in Fred Baillif’s award-winning drama La Mif. Not a household in the traditional sense, but the bond between seven at-risk teenage girls in a residential care home who consider each other ‘La Mif’ (French street slang for family). It’s a complicated, volatile kinship that makes for compelling viewing.
At a facility in Geneva, a team of social workers led by Lora (Grob) is struggling to find the right balance between protecting and educating the young women in their care. With the troubled teenagers reacting badly to being told what to do, fights with staff are frequent and foul-mouthed, while the girls also turn on each at the drop of a hat. Through it all, though, there’s a love and support among the group sorely lacking in the homes they were rescued from.
Tapping into his own experiences, former social worker Baillif has crafted the most realistic of films – one that often feels like a documentary. Adding to the authenticity are the performances of the non-professional cast (including the excellent Tonsi), most of whom grew up in the care system. Rarely has there been more genuine emotion on screen, rarely has the trauma suffered by abused youngsters been so powerfully conveyed.
To ensure every teenager tells their story properly, Bailiff cleverly divides his film into chapters devoted to each character, before shifting focus to Lora, whose own revelation is perhaps the most haunting moment in a film that refuses to pull any punches.
Starring: Claudia Grob, Amélie Tonsi
Director: Fred Baillif
Running time: 112 minutes
Certificate: 15

JULES ET JIM
In cinemas from 4 Fenruary
François Truffaut’s 1962 film set during World War I and focusing on a love triangle between French bohemian Jim (Henri Serre), Austrian writer Jules (Oskar Werner) and the free-spirited Catherine (Jeanne Moureau) returns to the big screen. The film is based on Henri-Pierre Roché’s semi-autobiographical novel which Truffaut discovered while browsing secondhand bookshops in Paris.
Certificate: 12A

DEAR MOTHER
On Netflix now
Laurent Lafitte writes, directs and stars in this comedy that centres around Jean-Louis, a man who is still alive even though his heart has stopped beating. He ropes in his wife Valerie (Karin Viard) and friend (Vincent Macaigne) to get to the bottom of the mystery.

Previous Article French property renovations: Why a garden shed will now cost you more
Next Article 7 French properties with a sexy walk-in wardrobe!