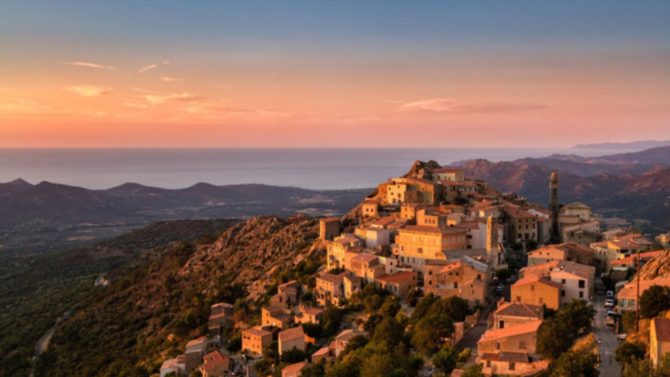 On the island’s northern tip, near the head of Cap Corse, is the peaceful port of Centuri. It’s around an hour’s drive north from Bastia, the second-largest town on the island, so makes for an ideal day trip. Take a seat at one of the delightful restaurants whose terraces overlook the harbour and watch the boats sailing back and forth.

Situated in the Balagne region, around 19 minutes’ drive east along the coast from Calvi, Algajola began life as a small fishing port with a fortress. Nowadays the professional fishermen have all but disappeared and tourism is the primary industry. Visit the Atelier Caruli on Vigna Alla Noce to see beautiful ceramics being made.

This hilltop village is dominated by the 16th-century Couvent Saint-François de Venzolasca. Stroll down from the centre to the sea, where a huge sandy beach and inviting waves await. The trappings of Bastia are around 30 minutes to the north by car.

At the heart of Haute-Corse, at the border of the Parc Natural Régional de Corse, sits one of the island’s most photographed villages. It’s not hard to see why; the beautiful bell tower, quaint houses and mountainous backdrop make it a snapper’s paradise. As it’s located at an altitude of 520m, visit in winter to see it under a picturesque blanket of snow.

Cargèse was established by a group of Greek immigrants at the end of the 18th century; its name in Greek is ????????. Its interesting heritage explains why it has two churches: a Latin church and a Greek Catholic church, both with a trompe l’oeil decoration by Russian painter Nicolas Ivanoff. Get to it in an hour from the island’s capital, Ajaccio.

High in the valley of the Fiurmorbo river in Haute-Corse is this busy little village with lots to see and do. Author Gustave Flaubert ventured here in the early 19th century and wrote about it in Par les champs et par les grèves. If you’re visiting in summer, there’s a lovely little jazz festival that takes place in August.

If you’re hiking in Corsica, this pretty village makes for the perfect pit-stop. There’s not a huge amount to do here, but its dramatic location, bordered by forests and mountains, makes it extremely photogenic. Located to the west of the island, it’s roughly halfway between Calvi and Ajaccio.

Near the island’s north coast, around 50 minutes from Calvi, you’ll find this attractive village whose name derives from ‘beau plaisir’. A stroll around the village lives up to its name; marvel at the traditional village houses and visit the Église Saint-Thomas, with its important 16th-century painting of the Virgin Mary.

In Corse-du-Sud, between the sea and the mountains and clinging to the hills, is Olmeto. It’s a great spot for history lovers; see the ruins of the old convent and the restored lavoir. It’s also home to the relaxing and reasonably-priced thermal baths of Baracci.

In this western part of the Parc Natural Regionel de Corse is this remote village with a small natural harbour. There isn’t a good road to take to get here, so it’s best visited on a boat trip from Porto, Calvi or Cargese. Despite being off the beaten track, there are some pleasant restaurants and hotels to stay in.

The eastern coast of Cap Corse, to the north of Bastia, is home to this authentic fishing village on a rocky peninsula. There’s something rather magical, if not a little eerie, about the higgledy-piggledy houses on the edge of the sea. Take a photo beside the ruined, 16th-century Genoese tower.

In the eastern Castagniccia region of the island is La Porta, a small village in the heart of the forest and mountains. The 18th-century Église Saint-Jean-Baptiste and its belltower dominate the skyline; head inside the stunning baroque church to marvel at its ornate paintings and ceiling.

Gorgeous in all seasons, Speloncato sits at an altitude of 650m near Mount Tolo and overlooking the northern coast. If you’re lucky enough to visit on either 8 April or 8 September, you’ll get to witness the special sunset which basks Speloncato in a magical light.

Now, this one’s a bit different; Occi is an abandoned village in the Balagne region of northern Corsica. First inhabited in the 15th century by a group of refugees fleeing the Saracens, it began having water worries in the 19th century when the wells dried up, and was completely deserted by the early 20th century. Now it’s worth making the two-hour hike from Lumio to the village to see both the ruins and the restored chapel.

Liked this? Read our other articles about Corsica:

10 reasons to visit Corsica this summer

The 8 best beaches in Corsica