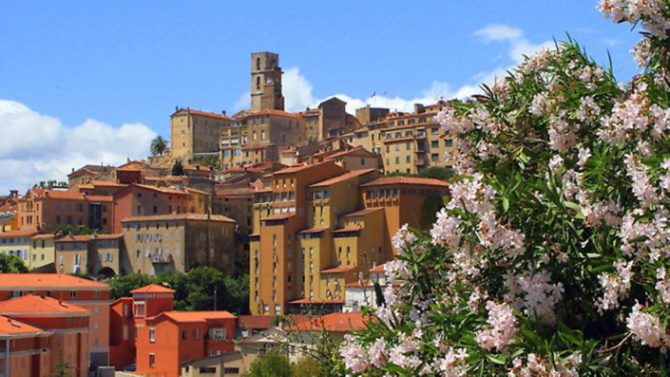 You don’t have to break the bank to buy a property on the Riviera, we’ve discovered 7 areas slightly inland that are much cheaper than the major coastal resorts

St-Laurent-du-Var is the second largest suburb of the city of Nice after Cagnes-sur-Mer, lying to the west of Nice on the other side of the river Var. The town’s population has greatly increased in the last century and it’s now part of the Nice metropolitan area. The suburb’s positioning close to Nice and with an abundance of flatlands (a rare resource in this region) led to the building of CAP 3000, the Côte d’Azur’s biggest shopping centre, as well as an industrial zone with many dynamic activities.

Perched on a rocky ridge above the river valley and crowned by its château’s crenellated tower, the village of Tourrette-Levens has a traditional feel despite its proximity to the glitzy coast, with an 18th-century church, a few simple shops and pretty squares. In the upper part of the old village at the Place des Pénitents Blancs is a unique triangular bell tower. For the adventurous, the semblance of a path skirts the walls of the fortress to the left, leading out to a ridge beyond which affords spectacular views.

Carros is a stunner of a hill village from which the views stretch up and down the river valley, towards mountain peaks in the north and south towards the coast from Villefranche-sur-Mer to Antibes. The old medieval village has a 12th-century château in perfect condition. Wander along vaulted passageways and admire tall houses with balconies overflowing with flowers. Carros should not be confused with Carros-le-Neuf, which was built in 1963 and comprises a cluster of somewhat soulless apartment blocks and industrial buildings.

Situated between Cannes and Grasse on the departmental border of Alpes-Maritimes and Var, Pégomas is best known for its mimosa. Two minutes from the centre is the ‘Route d’Or’ which winds through the Massif de Tanneron, along which you can admire the mimosa forest that blooms from January to March. There is fishing nearby and pétanque is played in the shady village squares. The most important historical building is the 18th-century church of St Peter, with a traditional ironwork campanile on its square clocktower.

Up in the hills to the north of Cannes, the town of Grasse has been synonymous with perfumery since the 16th century and is still home to around 30 perfume makers. The old town is large and interesting with streets winding between the 17th- and 18th-century buildings, up and down ancient steps, passing through arched tunnels and opening out onto squares. The principal square near the top of the old town is the Place aux Aires, where a pretty three-tiered fountain splashes and arcades line one side.

Created in 1868 when it broke away from the municipality of Cabris, Peymeinade is a small village west of Grasse traversed by the pretty Siagne canal. The part of Peymeinade seen by most people is the bustling group of shops and cafés along the Grasse-Draguignan road, but 300m north is the hidden old village containing a couple of streets with old houses, an attractive square with a 19th-century fountain and several trompe-l’oeil wall paintings. Peymeinade boasts some excellent fresh produce shops and the terrace café is the perfect stopping place during Sunday-morning shopping trips.

The pedestrianised village of Le Bar-sur-Loup is perched on a rocky spur extending out from the Sarrée plateau overlooking the Loup river valley. The old village is lovingly restored, with the old houses clustered around the 13th-century château and church in the centre. Sections of the original ramparts are still visible from rue Estrabarry and rue Cheiron and there are traces of ancient troglodyte dwellings in places. At the top of the village is the 14th-century church of St-Jacques-le-Majeur, predominantly Roman in style.