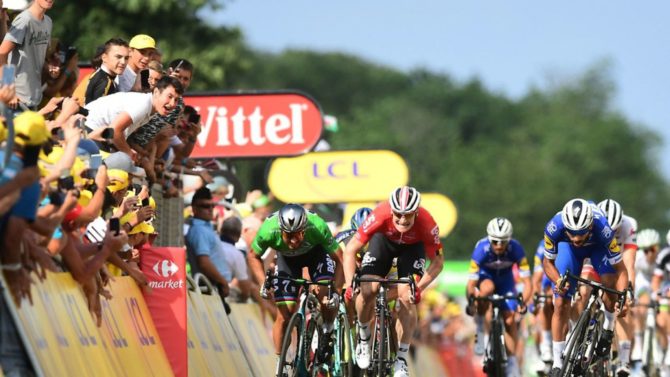 Crowds across France have been cheering on the Tour de France peloton as it has raced through their region. Who is on track to win? We have a quick run-through of the stages so far

Dutch cyclist Mike Teunissen finished fastest in stage one in Brussels with a time of four hours 22 minutes and 47 seconds.

This was the only Team Time-Trial of the 2019 tour, Teunissen held onto his lead for a second day.

The race crossed the border from Belgium into France, finishing in Epernay. Teunissen was overtaken in the rankings by Frenchman Julian Alaphilippe who finished fastest on this stage.

It was Italian Elia Viviani’s turn to win the stage, but Alaphilippe held on to the top spot in the overall rankings.

The riders faced some climbs on this stage from Saint-Dié-des-Vosges to Colmar in Alsace. Alaphilippe kept the yellow jersey for another day.

Things began to shake up on stage six. German Dylan Teuns won the stage, which put him third in the cumulative rankings, Alaphilippe moved down to second spot and Italian Giulio Ciccone took top spot.

Stage seven from Belfort to Chalon-sur-Saône was flat but at 230 km, the longest stage this year, was no easy ride. The top three held their rankings.

By the end of this stage, the participants had covered 1416.6 km in total. Frenchman Alaphilippe moved back up to top of the leaderboard, while fellow Frenchman Thibaut Pinot came second in this stage and took the number three spot in the general ranking.

Another hilly stage from Saint-Étienne to Brioud. South African Daryl Impey won the stage, less than a second ahead of German Tiesj Benoot.

Brit Geraint Thomas climbed up to the second spot on the leaderboard after the route from Saint-Flour to Albi.

The 2019 Tour de France route is higher than ever before